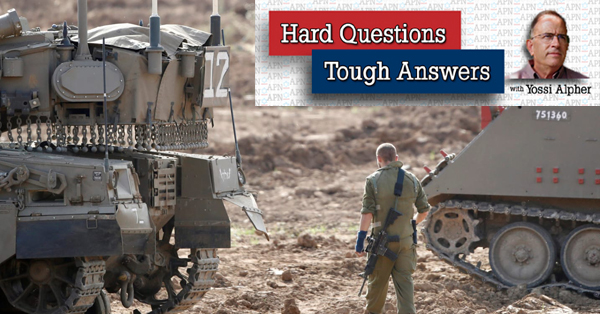 Q. As of Monday morning this week, the latest round of fighting with Hamas and Islamic Jihad in Gaza appears to have ended in a new ceasefire agreement. A breakthrough?

A. A temporary breakthrough at best. What we witnessed between Friday and Monday was typically painful and repetitive. It seemed to have been choreographed in advance among all the relevant actors: the belligerents--Israel, Hamas and Islamic Jihad in Gaza; and the mediators: Egyptian Intelligence, Qatar, and UN troubleshooter Nikolay Mladenov.

Q. How does this “choreography” work between sworn enemies? Israel and Hamas don’t talk to one another.

A. It mimics the previous ceasefire, agreed among these same actors after a previous round. The previous one involved Israeli agreement to a variety of benefits for Gaza: renewed monthly Qatari delivery of millions of cash dollars to sustain the Gazan economy, Israeli commitments to extend Gazan fishing rights further out into the Mediterranean, and Israeli agreement to open the Gaza crossings to increased commercial and human traffic. In return, Hamas promised to cease border sniping, incendiary balloons, and rocket and mortar fire and to keep Friday demonstrators away from the border fence. Qatar committed to pay Hamas more millions of dollars monthly, and Egypt committed to allow increased commerce between Gaza and Sinai.

This “package” has been rewrapped ten times in the course of the past year or so. It quickly deteriorates into violence because someone in Gaza who is disgruntled launches incendiary balloons to burn Israeli fields or, as in the latest case, snipes at IDF personnel at the border fence, wounding two. Hamas conveniently denies responsibility for the incident and blames it on Islamic Jihad or even some tiny and ostensibly out-of-control renegade group. Hamas also rationalizes the incident differently: Israel failed to follow through fast enough or extensively enough on its commitments to enable economic aid.

One way or another, the IDF responds to the balloons or sniping with what it believes is deterrent force: last Friday, an air attack on a Hamas outpost, killing four including a Hamas officer. Hamas, undeterred, commences firing hundreds of rockets. Israel bombs and bombards targets in the Strip. As the fighting continues, Hamas escalates the range of its rocket fire: first the Gaza periphery, then Ashkelon, then Beersheva, Rehovot and Ashdod. It threatens to fire at Tel Aviv. (I live just north of Tel Aviv; at this point in the choreographed scenario I make sure the corner of our house best suited to shelter is equipped with water, TV, transistor radio, etc.)

A. All the while, the Hamas and Jihad leadership are in Cairo, negotiating with the heads of Egyptian military intelligence. A senior Israeli security delegation is presumably there too, though not in the same room. The timetable is clear to all: the previous ceasefire was reached in time to enable Israel to celebrate Passover and hold elections in peace and quiet. It enabled Hamas to quell persistent (and audacious and unusual) popular demonstrations against the Gaza regime.

Accordingly, the next ceasefire has to see Israel through this Thursday’s Independence Day as well as the Eurovision contest Israel is hosting between May 14 and 18 in Tel Aviv. Rehearsals among the 40-or-so Eurovision national delegations are already beginning in a city Hamas is cleverly threatening to target, with potentially disastrous consequences for Israel’s international reputation as a safe place to visit and celebrate. For its part, Hamas would like the month of Ramadan, which begins Monday, to be celebrated tranquilly lest Gazans start demonstrating against it again.

At this point in the choreography, Sunday of this week, Israel demonstrates it cannot be deterred and starts toppling Gaza high-rise buildings from the air. These are structures used by the Hamas security establishment and related institutions. Occupants are warned in advance to evacuate. This is the tactic that persuaded Hamas to end the summer 2014 war after two months of fighting that included rockets on Tel Aviv. Hamas responds with an anti-tank rocket against an Israeli motorist across the border fence, bringing Israel’s death toll in this round to four (a high figure for these exchanges; Hamas’s losses are over 20).

Note that Israeli highway and even train traffic are clearly visible and targetable from the Gaza Strip, meaning that the motorist’s death is a conscious escalatory step by Hamas. Israel responds by sending a drone to kill a senior Hamas financial official in his moving car in Gaza. That means Israel is now threatening senior Hamas personnel as well as their Gazan real estate assets. On Sunday, Israel is also massing armor and infantry units on the border preparatory to invading Gazan territory. This is widely covered by Israeli TV to make sure Hamas gets the message.

That symmetrical bluster is the signal the hand of the invisible choreographer has been waiting for. At 4 a.m. Monday morning it’s over. All the old agreements have been renewed in Cairo for the tenth time this year: a quiet border fence in return for more Qatari money, more fishing rights, more fuel deliveries, open border crossings and infrastructure investment. Within weeks it will emerge that Israel or Qatar or Egypt threw in a sweetener in the form of more economic benefits for Gazans. A million Israelis and two million Gazans can emerge from their shelters.

Q. Israel has a new IDF chief of staff who talks about making the IDF more “deadly”. It will soon have a new and yet more right-wing-religious-nationalist government. Once that government is in place, will it finally take serious action to end this ridiculous chain of disruptive clashes and get rid of Hamas?

A. Almost certainly not.

As of this ceasefire, there are three possible scenarios for the future of the Israel-Hamas conflict. First, expansion of the latest agreement into a fully-developed plan for Israel-Gaza peaceful coexistence and Gazan economic development. That is the outcome that all of the past year’s ceasefires have aspired to. It is not an impossible outcome, but it is doubtful, though not for lack of good intentions.

If Hamas would free two Israeli civilians who crossed into the Strip in a state of mental instability, and return the bodies of two Israeli soldiers killed in the Strip in 2014, a serious process of Gaza economic and infrastructure development could begin. But Hamas wants Israel, in return for the two live and two dead Israelis, to free a lot of Hamas prisoners from Israeli jails.

This is where neither side can bend without incurring its public’s fury. From Israel’s standpoint, the asymmetry of freeing all those Hamas terrorists, many of whom will return to terrorism, is insufferable. From Hamas’s standpoint, repatriation of its prisoners justifies the most ghoulish policy regarding the bodies of dead Israeli soldiers. Note that current Gaza Hamas leader Yahya Sinwar was released from two decades of incarceration in Israel in the last prisoner swap, which involved a thousand Hamas terrorists in return for IDF soldier Gilad Shalit in 2011.

At least Israel got back a live soldier then. Even if a new deal could be arranged without too much political flack on the Israeli side, there is no guarantee that Hamas, which as a militant Islamist organization is committed to Israel’s disappearance, won’t abuse Israel’s economic and security largesse to implement a new military buildup, thereby eventually triggering another round of violence.

That points to the second scenario, which involves repeated rounds of violence, sometimes limited skirmishes and sometimes heavy and extended fighting, but always ending up with a new ceasefire which is sooner or later violated, triggering another round. This is the status quo as we write.

A third scenario would involve a major Israeli military offensive to reconquer the Gaza Strip and physically eliminate the Islamists there. This is undoubtedly feasible. Countless politicians, including Netanyahu, have periodically promised to do precisely this. But then they confront the reality that this scenario would almost certainly involve hundreds of Israeli dead and would leave Israel responsible for the welfare of over two million Gazans under a new occupation. No one would offer to take the Strip off Israel’s hands. The post-war price for Israel would be far-reaching international condemnation, a heavy financial burden, and lots of handwringing among Israelis asking “what did we get ourselves into”. The prime minister who gave the order would pay the political price.

Q. Hold on. What about a scenario that reunites Gaza with the West Bank under PLO rule within the framework of a peace process with Israel--with or without Israeli reoccupation of the Strip?

A. Here the problem is that either no one wants this scenario or no one is capable of delivering it.

Hamas refuses to accept any aspect of reestablished Palestinian Authority rule (meaning, in effect, PLO/Fateh rule) in Gaza that would constrain its military freedom to attack Israel. The PA under Mahmoud Abbas will in theory accept nothing less than full Hamas integration, politically and militarily, while practically speaking it has given up on Gaza.

PM Netanyahu wants a separate Gaza, preferably under the rule of a “domesticated” Hamas (scenario one above) but if not, then under the rule of an unruly Hamas (scenario two above)--anything but a reunited Palestinian Authority that he would be obliged to negotiate with. He said as much to a Likud caucus not too long ago. Netanyahu and his new/old coalition, with wind in their sails from the anticipated Trump peace plan, want to proceed with annexing parts of the West Bank, beginning with the Israeli settlements there and eventually including more and more of Area C (60 percent of the West Bank).

Netanyahu believes that most of the Arab world is so fed up with the Palestinians and so in need of Israeli security cooperation against Iran and ISIS that it will acquiesce. This has been Netanyahu’s plan for the past ten years, during which there have been no political talks whatsoever with Abbas and the PLO leadership and no initiative for a confidence-builder like unilateral Israeli withdrawal from parts of Area C; only indirect talks with Hamas about ceasefires that don’t last long. Netanyahu is abetted in this strategy by Abbas’s negotiating intransigence--e.g., insisting on the right of return and Temple Mount--and Hamas’s fanatic hostility.

Q. Who pays the price for this approach?

A. First, Palestinians everywhere, who need a state of their own that lives at peace with Israel. Secondly, Israelis living near the Gaza Strip, who pay an almost constant price by living in fear of Hamas rockets, mortars, incendiary balloons and tunnel attacks. Netanyahu essentially insists they continue to live their lives within 10-15 seconds’ sprint to a shelter so he can continue settling the West Bank in the absence of any peace process. After all, even a partial Israel-PLO deal on the West Bank or a unilateral Israeli withdrawal would either have a calming effect on Gaza too or give Israel more military and political leverage there.

The third and largest actor that pays the price is all Israelis. They already find themselves intimately locked-in geographically and demographically with three million West Bank Palestinians. Thanks to settlement expansion and restrictions on liberal civil society activism, Israel under Netanyahu is becoming, willy-nilly and regardless of the absence of a two-state process, a single binational state that will soon either cease to be Jewish or become recognizably a racist apartheid entity.

That outcome, too, appears increasingly to be choreographed--by Trump, by Netanyahu, by Abbas and by Hamas.