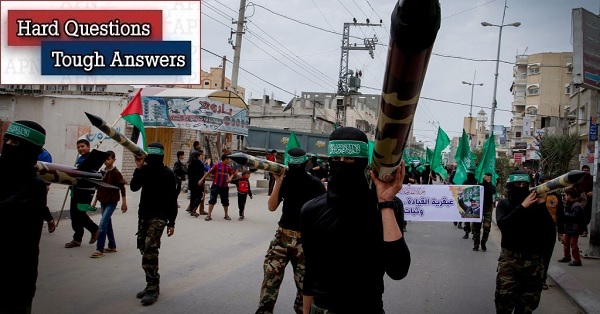 Q. Trump and Putin are meeting in Helsinki to discuss the fate of the Middle East; Syrian and possibly Iranian forces are retaking territory right up to the Israeli Golan; Israel’s Knesset is busy passing an ultra-nationalist nation-state bill. Yet the IDF can’t stop cheap incendiary balloons and kites launched from Gaza from burning Israeli fields?

A. The question accurately cites three of the reasons why Israel is avoiding the kind of all-out war with Hamas that is apparently necessary in order to put a complete stop, however temporarily, to incendiary and other attacks from Gaza. Not interfering with the Helsinki summit on Monday (or for that matter with the soccer World Cup in Russia, which ended on Sunday), is undoubtedly a factor in Israeli considerations.

So is the perceived need to avoid a major conflict on Israel’s southern flank when conflict across the northern border is liable to draw Israel into a far bigger conflict there. Indeed, Iran may be encouraging its client Hamas to heat up the Gaza-Israel border precisely in order to distract the IDF from what it, Syria and Russia are doing in southwest Syria.

Then there is the nation-state bill (to be discussed in depth in a future Q & A), an equally controversial bill regulating military service for the ultra-Orthodox, and any other unfinished business deemed urgent before the Knesset breaks for a holiday that extends into early October. PM Netanyahu is apparently anxious to go the polls before he is indicted on corruption charges. As he contemplates the prospect of new elections either in late 2018 or early 2019, it is more important to him to cater to his party faithful and his coalition partners than to get embroiled in another inevitably inconclusive and unpopular Gaza war. But if there is about to be a war, better to manage it once the Knesset is no longer in session so Netanyahu can more easily control the problematic spin associated with loss of life and property and international condemnation.

Here is yet another reason not to target the balloon and kite launchers: most of them are minors and ultimately the damage caused by the fires to Gaza perimeter fields, orchards and nature reserves is limited and containable. IDF Chief of Staff Gadi Eizenkot spoke his mind on this issue in the weekly Cabinet meeting on Sunday when confronted by Jewish Home’s hawkish education minister, Naftali Bennet, who advocates targeting the youthful balloon launchers. Bombing civilians, and minors to boot, Eizenkot responded, is “contrary to the IDF’s ethical and operational stand”.

Finally, Israel’s subterranean anti-tunnel barrier along the Gaza border is still under construction. Until it is completed, the IDF cannot rule out the possibility that in a new war, Hamas commandos will infiltrate Israeli border communities by tunnel. Meanwhile, pinpointing and eliminating Hamas tunnels is a haphazard business: it was the Israel Air Force bombing of two such incomplete tunnels that triggered Saturday’s escalation.

Q. Where did this leave us at the start of a new week?

A. By Sunday night the Israel Air Force was attacking those balloon and kite launchers the IDF determined to be adult Hamas operatives (until now it had fired only warning shots at adults). And Iron Dome rocket interceptors were being deployed in central Israel in preparation for war. On the other hand, mediation by Egypt and United Nations emissary Nicolay Mladenov had persuaded Hamas to declare a ceasefire. All this, following an escalation of rocket and mortar fire on Saturday that produced an IAF bombing response targeting some 40 Hamas installations deep inside the Strip. Saturday’s fighting exceeded any escalation since the 2014 war.

The situation Monday morning was paradoxical. A brief but heavy escalation had taken place in which there were few casualties on both sides. Then a ceasefire had been declared that no-one believed would last.

Yet the overall impression was that neither Israel nor Hamas wants another round of all-out conflict. Previous rounds, in 2008-9, 2011 and 2014, ultimately did not benefit either side. Gaza suffered heavy human and material losses. Israel had to deal with prolonged disruption of daily life and considerable international condemnation. Who needs another round?

A. It depends whom you ask. One school of thought in Israel argues that another war could be Hamas’s only way out of its current dilemma of economic hardship and suffocating financial boycott by the PLO in Ramallah. A war, with its inevitable Palestinian suffering and casualties, could pressure the international community and particularly the Saudis and Emirates, who object to Hamas’s links with Iran and the Muslim Brotherhood, to deliver massive economic aid. Then too, as we approach the departure from the scene of West Bank-based Palestinian leader Mahmoud Abbas, Hamas perceives a need to flex its muscles as it gears up to compete for broader Palestinian leadership status. Certainly Saturday’s firing of over 100 rockets and mortar shells into Israel can be understood as an indication that Israel is not successful in deterring Hamas.

Further, Hamas has to take into account pressure from Iran--its principal backer these days. If Iran’s influence over Hamas is still somewhat limited, it exercises greater control over Islamic Jihad, which is more aggressive than Hamas in launching provocative attacks from Gaza.

On the other hand, similar factors can be cited to explain Hamas’s reticence to escalate. The Saudis and Emiratis are fed up with the Palestinian cause in general and Hamas in particular. They are offering financial incentives to Egypt, with Trump administration backing, to build economic infrastructure in Sinai that would serve the Gaza population, but only under conditions of peace.

Then too, with Iranian and Hezbollah help, Hamas is trying to expand its deployment to southern Lebanon and to strengthen its clandestine bases in the West Bank. These are works-in-progress that ostensibly mandate patience and give Iran a say in the degree of Gaza escalation Hamas can risk.

Q. A number of Israel government ministers appear to favor a unilateral effort by Israel to build a port and airport for Gaza, either on an artificial island to be constructed off the Gaza shore or in Cyprus. The idea is to connect the Strip to the world so it can develop and won’t be seen as Israel’s responsibility. Why is the security establishment opposed?

A. Both PM Netanyahu and Defense Minister Liberman are opposed. Their view reflects an effective veto by the security establishment, which has reason to fear that it could not enforce stringent enough security supervision of the harbor and/or airport. Hamas, which will not abandon its hostile stance toward Israel’s very existence, would use these facilities to build up a renewed military potential. Besides, Israel would have to recruit ten billion dollars for the project and it would take years to construct; there are cheaper and quicker palliatives for Gaza’s most urgent dilemmas--such as welcoming Gazan laborers to work in Israel--that the security establishment also nixes.

An additional reservation voiced by the security community as well as many in the government concerns the remains of two Israeli soldiers killed in the 2014 war and held ever since by Hamas. Israel demands their return and is offering remains of Hamas fighters and terrorists in return. Until then, it is holding up consideration of any economic gestures that go beyond the narrow limitations of what it permits today to enter Gaza from Israel. Hamas, however, insists on exchanging the two dead IDF soldiers for a large number of live Hamas prisoners held by Israel.

Note that current Gaza Hamas leader Yahya Sinwar is himself a returned prisoner, hence a direct stakeholder in the issue. There are powerful military and civil society lobbies on both sides holding out for the exchange deals they want. In general, the issue is too sensitive for the leadership on either side to flout the values (Jewish burial for fallen soldiers, ransoming prisoners) the lobbies represent.

Still, if Israel hesitates to offer the Strip economic “carrots”, it is quick to use economic sticks. Currently, to counter the fires and mortar shells, the number of trucks bearing goods from Israel into the Strip at the Kerem Shalom crossing has been halved to subsistence level. On the other hand, Egypt now keeps the Rafah crossing into Sinai open, and Israel has to depend on the Egyptian army to ensure the crossing is not being used for smuggling arms and ordnance.

In short, don’t look for too much cold logic in all of this.

Q. We’re back to square one: surely there are some good ideas for dealing more effectively with what has become a chronic and occasionally bloody stalemate with Hamas in Gaza . . .

A. As I have mentioned frequently over the years, Israel has no viable strategy for dealing with Hamas in Gaza. This assessment has not changed, even as some Israeli politicians display a populist inclination to portray the relatively harmless incendiary attacks as strategic threats. Indeed, Hamas’s embrace of civilian protest initiatives--mass demonstrations at the fence, incendiary kites and balloons--merely drives home the reality that there is no obvious strategy for dealing with a militant Islamist movement that hides behind civilians, refuses to negotiate, invokes radically asymmetric warfare, and seemingly doesn’t care if thousands die and its entire infrastructure is destroyed in a war.

Reoccupy Gaza? Even Liberman, who used to advocate this before becoming defense minister, now accepts the IDF assessment that the loss of life, financial cost and international condemnation would be intolerable. (This, incidentally, is a clear demonstration of how a loudmouth politician sobers up once he has agreed to shoulder real responsibility.)

Target and assassinate Hamas’s leaders? This is not a strategy insofar as they are replaceable. Moreover, such an act on Israel’s part would indeed launch a new war for which Israel can offer no “happy end”.

Topple newly-built skyscrapers in the Strip? Interestingly, it was only when Israel did this in August 2014 that Hamas agreed to end the last war. Late Saturday, the bombing of another skyscraper, this one used for Hamas military training in urban warfare, seemingly persuaded Hamas to ask for a ceasefire.

Toppling skyscrapers--the IDF phones warnings to the residents to evacuate in time--is hardly a strategy. But it may prove more effective than the current non-strategy of periodically “mowing the lawn”.