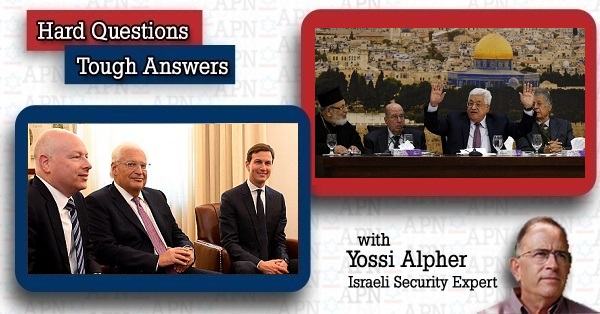 Q. The situation in Gaza continues to deteriorate in every way. Meanwhile, on Sunday in the West Bank Mahmoud Abbas made an incendiary speech cutting ties with the Trump administration and delegitimizing Israel. Which of these confrontations is more urgent? Which more important?

A. Gaza is more urgent because it could deteriorate at any time into another armed confrontation. Abbas’s Ramallah speech is more important due to its potential impact on the US role, on the future of the Palestinian Authority, and on attempts to restart a peace process.

A. Last week, Israeli security officials once again publicly warned that the deteriorating economic situation in the Strip could catalyze a total collapse there. Almost in parallel, the security establishment in Israel warned that the sporadic rocket fire into Israel from the Strip, coupled with Israel’s successes in detecting and destroying Hamas attack tunnels, could trigger a new Israel-Hamas conflagration.

The warnings of economic collapse came despite a decision by the Ramallah-based Palestinian Authority to again pay Israel to supply electricity to Gaza. But that sole positive development was apparently the exception that proves the rule of overall deterioration.

After all, Gazans still remain without electricity for at least 16 hours of the day. Fateh-Hamas reconciliation and reintroduction of effective Fateh rule in the Strip are still not happening. Inside the Strip, Hamas faces rocket-firing provocations by various jihadist groups that it cannot or will not stop, despite its protestations that it currently needs stability on the front with Israel and despite Israel’s repeated signaling that its priority is stable Hamas rule in the Strip. Meanwhile, Iranian influence over Hamas is reportedly growing--a bad omen for Hamas-Israel stability.

On the intra-Palestinian political front, Hamas refused to attend this week’s Palestinian Central Council meeting in Ramallah, thereby leaving the arena to Abbas (also known as Abu Mazen) and his fiery two and a half-hour speech. Hamas’s excuse or reason for not being represented was that its entire senior leadership, which is based in Gaza, Lebanon and Turkey, would be unable to get to Ramallah due to Israeli restrictions at the border crossings.

The entire complex of internal Palestinian disarray, the Palestinian perception that US President Trump’s Jerusalem decision is an intolerable provocation, and the future of Palestinian-Israeli relations were summed up neatly this week in the Palestinian context by Jordan-based columnist Oraib al-Rantawi: “If Jerusalem . . . and an end to creeping settlement expansion are insufficient cause for ending the [internal Palestinian] disagreement and lining up shoulder-to-shoulder . . . what can possibly bring these parties together? . . . If the aim of convening the PCC is to respond to the US decision regarding Jerusalem . . . is this how the PCC issue should have been managed?”

Q. Can you place last Saturday’s Israeli destruction of yet another Hamas attack tunnel in the context of these complex issues?

A. This was the fourth tunnel detected and destroyed by Israel in as many months. Clearly Israel now has the technological capacity to thwart Hamas’s tunnel-digging. By the same token, the IDF appears to be destroying the tunnels slowly and systematically in order to send a dual signal to Hamas. On the one hand, deterrence: between the Iron Dome system intercepting Hamas rockets and the new technology intercepting tunnels, Israel can neutralize Hamas offensive capabilities. On the other hand, Israel’s measures are calculated and defensive and are not intended to provoke a war.

This latest tunnel, impressively built as a full-fledged underground road, was apparently designed both to smuggle ordnance into the Strip from Egypt (it stretched from Gazan Rafiah under Israel’s Kerem Shalom into Egyptian Sinai) and to enable Hamas to attack the very lifeline of fuel and food supplies for the Strip that is anchored at the Kerem Shalom transshipment terminal. Israel retaliated by briefly closing the terminal.

Why Hamas would knowingly jeopardize its economic supply line from Israel and compromise its recently improved relations with Egypt is just one of several conundrums that define the Gaza reality. Any analytical attempt to assess Hamas’s ongoing belligerency, the deteriorating economic situation in the Strip, and the failure once again of attempts at Palestinian reconciliation must conclude that another round of Hamas-Israel violence is inevitable because it is Hamas’s only way out of its self-imposed dilemma.

Abbas’s own aggressive speech at the PCC in Ramallah on Sunday certainly did not point to a way out.

Q. What was so aggressive about the speech, which you define as the more important development?

A. The 83-year old Abbas spoke forcefully for over two hours. He rejected any US role: “We will not accept deals presented by the US, nor its mediation after the crime it committed against Jerusalem [i.e., Trump’s recognition of Jerusalem as Israel’s capital].” Abbas refused to host American Ambassador to Israel David Friedman because the latter avoided using the term “occupied” for the West Bank and East Jerusalem. He attacked UN ambassador Nicki Haley. He rejected Trump’s tweeted threats to cut American financial aid (to UNRWA and to the Palestinian Authority) which were based ostensibly on the grounds that the PLO boycotts negotiations, when in actual fact negotiations don’t exist. “Shame”, Abbas cried. “May your house be destroyed” he cursed Trump. (Incidentally, another looming, very controversial and more fact-based reason for the US to withhold aid is extensive Palestinian financial support for convicted terrorists and their families.)

Indirectly, Abbas also appeared to be saying ‘no’ to the new Saudi leadership, which summoned him to Riyadh a few weeks ago and apparently tried to sell him Trump’s impending “deal”. Then too, there was no serious discussion by Abbas of reconciliation with Hamas, an Egyptian project. Overall, Abbas’s speech certainly did not improve his relations with the Arab world, which is far more deferential toward Trump.

Importantly, Abbas claimed to remain committed to talking peace with Israel, continued to reject terrorism and did not negate Israeli-Palestinian security cooperation (the PCC assembly, but not Abbas, recommended to suspend recognition of Israel--an empty gesture). Yet Abbas could not resist falling back on the shopworn and incendiary Palestinian narrative that Israel is the colonialist creation of a western conspiracy. “Israel is a colonialist project that has nothing to do with Jews,” he stated. Britain must apologize for the 1917 Balfour Declaration. Holland was recruited to bring the Jews to Palestine because it “had the largest navy in the world”. (Holland, incidentally, had a large naval fleet four centuries ago. By dragging it into the Palestinian narrative Abbas seemingly predated Zionism to the seventeenth century.)

A. The mainstream ultra-nationalist right, from PM Netanyahu and President Rivlin on down, responded that Abbas had simply revealed his true rejectionist face and that he never wanted a reasonable deal. Here it is important to recall that Abbas did not invent the denigration of Israel as a colonialist provocation. It is in fact a broadly believed Arab narrative that has never prevented peace talks or agreements.

More charitable Israeli reactions noted that Abbas had not rejected peace talks with Israel--only US involvement--and that his speech reflected his isolation and frustration as he prepares to leave the international stage sometime soon with no peace prospect on the horizon.

A. The very fact of their publication appears to demonstrate just how bankrupt intellectually and historically the Trump peace team is. One rumored deal would fall back on an idea reportedly presented by PM Netanyahu to Egyptian President Sisi under the auspices of US Secretary of State Kerry in 2014: Egypt would cede the Palestinians land in the northeast Sinai Peninsula, adjacent to the Gaza Strip, to accommodate Gaza’s demographic and economic needs, thereby enabling Israel to hold onto West Bank settlement blocs within the framework of a two-state solution.

Back then, Sisi rejected the proposal. The PLO’s Abbas rejects the proposal. The notion of playing with Egypt’s (and, in another version, Jordan’s) borders to enable Israel not to withdraw from Palestinian lands has consistently been rejected by Israel’s Arab neighbors.

Jordan take the West Bank? That might have been possible 50 years ago if Israel had agreed to withdraw from all of the West Bank and most of East Jerusalem. Ever since then, the Hashemite Kingdom has been managing well without millions more Palestinian citizens.

Egypt take back Gaza? Anwar Sadat rejected that “gift” from Menachem Begin back in 1977.

The Bannon statement, if accurate, basically reflects the abysmal ignorance of the Trump team when it assumed the presidency. The Trump provocations rejected so forcefully by Abbas appear to indicate that Trump and company have learned very little about the Middle East in the ensuing year.

A. Right now there is no one around to stop the Netanyahu government from swallowing more and more West Bank territory on its way to generating a violent one-state reality that will endanger the entire Zionist enterprise. Abbas is not up to the task. Trump is not up to the task. The Arab world is broadly indifferent. Hamas is virtually dysfunctional.

The months ahead (predicting beyond that is folly) promise violence with Gaza and historically disastrous triumphalism from Netanyahu.