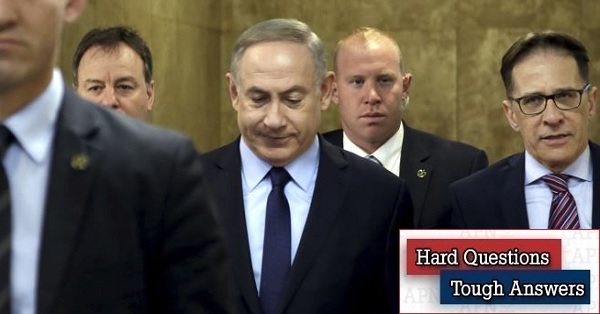 This week, Alpher discusses the dilemmas Prime Minister Netanyahu is leaving behind during his visit to the U.S.; whether Netanyahu could be trying to dissolve his coalition; the peace process; where the Gaza Strip is in these calculations; and the growing likelihood of a “first northern war” pitting Israel against Iran and its allies in Syria and Lebanon.

Q. This week PM Binyamin Netanyahu is in Washington, addressing AIPAC and meeting with President Trump. What dilemmas has he left behind in Israel and the Middle East?

A. The celebratory mood of Netanyahu’s appearance in the US can, at best, briefly distract attention from the mess at home and in the neighborhood. Criminal investigations are closing in on the prime minister. His coalition threatens to implode. The Gaza Strip is collapsing. Prospects for a productive peace process with the Palestinians are close to zero. Across the northern borders, the violence in Syria is taking on a new and very dangerous regional and global dimension. And Iran is threatening from the north.

If I were Netanyahu I too would need a brief respite abroad.

Q. You dealt with the criminal investigations last week and you suggested that one possible Netanyahu ploy could be to dissolve his coalition. Is that what is happening?

A. Possibly, but in a roundabout way. Netanyahu and one coalition partner, Finance Minister Kachlon of the Kulanu party, have been trying to pass a budget for 2019 many months in advance. Since Israeli coalitions have been known to collapse due to disputes over the budget, this is understood as a way of ensuring that the current coalition lasts its full term, meaning at least one more year. But now the ultra-Orthodox parties are threatening to vote against the budget unless the coalition makes good on Netanyahu’s commitment to pass laws that ensure their yeshiva students can avoid military service--a major issue of contention in recent years.

Defense Minister Lieberman and his Yisrael Beitenu party refuse to approve those laws. If the budget is rejected, the coalition falls. As usual, each party labels its cause an issue of do-or-die for the coalition.

There is nothing unusual about these controversies, and Netanyahu is skilled at navigating them. “Fake crisis that Netanyahu can resolve in ten minutes”, noted Justice Minister Ayelet Shaked of the Jewish Home party, another coalition partner. An extra budgetary allocation here, a postponement there, and the crisis goes away.

What is unusual is the possibility that, precisely because of the prime minister’s legal difficulties and in view of his Likud party’s reassuring lead in the polls, he might seize the opportunity presented by coalition partners Kachlon, Lieberman and the ultra-Orthodox and opt for new elections in June. Ostensibly, the elections would be about universal military service and good governance, both popular issues. Netanyahu’s real objective would be to throw a spanner in the wheels of the criminal justice machine, gain a new mandate with which to rebuff indictments, and preempt the effect on voters of an actual indictment as yet another Netanyahu confidante, Nir Hefetz, signs a plea deal to testify against him.

As seen from both Washington and Jerusalem, elections could be a tempting option for Netanyahu. Incidentally, they would also delay, for close to a year, any action by anybody on the following item.

Q. There is nothing new regarding a peace process?

A. Everything is new, yet nothing is new. Netanyahu will hear from Trump about the impending administration peace plan for Israelis and Palestinians. The Israeli prime minister will probably be pleased with at least some of the anticipated details: settlements remaining in place, a major role for friendly Arab countries, no mention of the 1967 borders, Israeli forces remaining in the Jordan Valley, etc.

The contrast with Palestinian demands has never been greater. Palestinian leader Mahmoud Abbas made sure of that on February 20 when he addressed the United Nations Security Council. Abbas, who has rejected a US-led process by way of protesting Trump’s recognition last December of Jerusalem as Israel’s capital, proposed an international peace conference that would replace the US role, facilitate Palestine’s acceptance as a UN member and promote mutual Palestinian-Israeli recognition based on the 1967 borders.

“Another peace plan for the collection”, Professor Eli Podeh of the Hebrew University cynically labeled Abbas’s latest approach. The Trump proposal, likely to be unveiled to the public in the weeks ahead, will merit the same designation. Netanyahu will have no regrets about consigning both to the overflowing dustbin of Israeli-Palestinian history. Involvement in a peace process could bring down his coalition, which is fueled to a large extent by the steady progress of creeping annexation of the West Bank and ultra-nationalist legislation at home.

Q. Where is the Gaza Strip in these calculations?

A. Nowhere to be found. Neither Trump nor Abbas has found a way to enable the official Palestinian negotiating body, the Palestine Liberation Organization, to represent Hamas-led Gaza in peace negotiations. The peace schemes that are currently on the agenda conveniently ignore Gaza. Trump’s threat to deny US financial aid to UNRWA, which supports more than half of Gaza’s population who are descendants of 1948 refugees, represents a negative American contribution. Only Egypt is trying to mediate between the PLO/Fateh and Hamas, thus far with little to show for the effort.

Hovering in the background are well-intentioned schemes to rehabilitate the indigent Strip by encouraging investment, building ports and lifting the Israeli and Egyptian economic blockades and border closures. The IDF has submitted one such plan to an international forum dedicated to funneling aid to Gaza. Israel’s minister of transportation, Yisrael Katz, has a plan to create an artificial island off Gaza’s Mediterranean coast that would ostensibly solve many of the problems. No one seems to be impressed, any more than they were back in the heady days of Oslo in the mid and late-1990s and during Israel’s 2005 withdrawal from the Strip, when Gaza was hyped as the “next Singapore”.

Everybody talks about Gaza while, in the meantime, nobody does anything. The humanitarian explosion is fast approaching. No peace scheme can hope to go far without a revolutionary reversal of Gaza’s fortunes. I doubt Gaza is even listed on the Trump-Netanyahu agenda.

Q. You also dealt recently with the growing likelihood of a “first northern war” pitting Israel against Iran and its allies in Syria and Lebanon. Are there new threats in this arena?

A. US Secretary of State Tillerson declared on February 13 that, in addition to its 2,000 troops on Syrian soil, the US and its coalition allies “control 30% of the Syrian territory, and control a large amount of population, and control a large amount of Syria’s oil fields.” Ostensibly, and allowing for exaggeration on Tillerson’s part, this gives Washington a place at the table where Syria’s future is determined.

But there is no table. Russian-sponsored talks do not involve the US, while for years UN-sponsored talks in Geneva have gone nowhere. Indeed, there appears to be no viable American strategy even for getting to the negotiating table or for influencing the outcome in Syria. Having essentially routed ISIS from the region, Washington has no clear rationale for the ongoing US presence. Rather, we confront only warfare that threatens to embroil the US in clashes with Russia, Turkey, and/or Syria and its Iranian-recruited allies.

On February 7-8, US warplanes supporting US-backed Syrian Democratic Forces near Deir al-Zor in eastern Syria reportedly killed several hundred mercenaries, many of them Russian. They were employed by private Russian security companies whose activities in Syria are backed by Moscow yet remain “deniable”. Apparently, Russia has not yet decided how to respond to an incident that during the Cold War might have constituted a casus belli.

In parallel, US-backed Kurdish and Arab forces in northern Syria are fighting a Turkish invasion that could conceivably lead to clashes between two NATO members, the US and Turkey. Turkey’s anti-Kurdish penetration has actually brought Syrian forces to the aid of Syrian Kurds who were formerly their enemies and had earlier threatened secession. And it has exacerbated the Turkish-Russian love-hate relationship on Syrian soil.

In short, the fighting in Syria is metamorphosing into a hodge-podge of fighting over Syria between its neighbors. The US is liable to become more deeply involved--yet without knowing why.

And the Iranian-led threat against Israel from Syrian and Lebanese soil, with Russia hovering in the background, has not gone away. Israel’s concern regarding the absence of firm US backing in this arena is undoubtedly on the Trump-Netanyahu agenda. Last week a bipartisan US Senate visit to Israel concluded with Senator Lindsey Graham of the Armed Services Committee stating, “Any time you leave a meeting where the request is ammunition, ammunition, ammunition, that’s probably not good. . . . When they [Israel] tell you we want help to deal with the blowback that might come from attacks on civilian targets where Hezbollah has integrated military capability, that was pretty striking.”