Hard Questions, Tough Answers (10.9.17) - Palestinian Reunification: The Questions That Need to be Asked 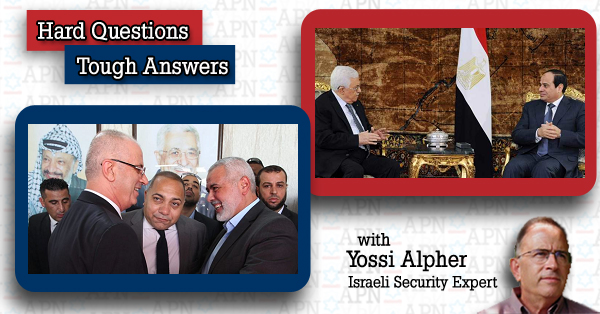 This week, Alpher discusses the Fateh-Hamas negotiations regarding a unified Palestinian Authority that were set to commence on Monday in Cairo under the tutelage of Egyptian Intelligence Chief Khalid Fawzi. As this crucial reunification process proceeds, many questions arise--more than our usual weekly count. Note that at this juncture in the process, many of the answers are instructive rather than conclusive.

Q. Is the Hamas Military Wing (Izz ad-Din al-Qassam Brigades), some 40,000-strong, being absorbed into the Palestinian Authority, and without its Islamist trappings?

A. This is the most important issue: will Gaza-based Hamas effectively disarm. Palestinian Authority President Mahmoud Abbas (Abu Mazen) insists on this condition. Hamas leaders say they want a “Lebanese solution”, meaning that Hamas, like Hezbollah, would remain a separate and totally autonomous military/terrorist force that dominates the “state”--in this case, the PA. Yet this issue is apparently not on the immediate Cairo agenda. Because it is the most difficult to resolve, it is being left for last.

Q. Are the Gaza Strip’s borders with Israel and Egypt opening up to commerce and human traffic?

A. This is being discussed in Cairo. Hamas is apparently prepared for West Bank-based Fateh, meaning the PA, to take over these functions. Yet Israel and Egypt, on the other side of the Gaza Strip’s borders, are likely to hesitate because of the issue of Hamas disarmament. Reopening of borders is a significant possible outcome of Palestinian reconciliation because it would begin to alleviate the catastrophic humanitarian crisis in Gaza by providing for more electricity and better sanitation and drinking water. Indeed, a successful agreement would almost certainly invite far-reaching regional and international aid and infrastructure-building programs for the Strip.

Q. Are Palestinian leader Mahmoud Abbas and PA Prime Minister Rami Hamdallah and their ministers spending roughly half their time in the Strip, as befits a West Bank-Gaza unity arrangement?

A. Not yet. Hamdallah is currently in Gaza, with his ministers. But Abbas has not yet agreed to even a visit. By holding out, he presumably hopes to obtain a better deal, one that significantly constrains Hamas and empowers Abbas’s Fateh movement in the Strip both politically and militarily.

A. No, not yet. Netanyahu wants Hamas to recognize Israel (presumably, in the conditional manner that the PLO does, meaning recognize Israel’s sovereignty and right to exist albeit not as the state of the Jewish people). Netanyahu, like Fateh, insists Hamas disband its military arm. And he wants it to sever its connections with Iran--another condition that West Bank-based Fateh would probably endorse. At the end of the day, under a successful reconciliation agreement Fateh and Hamas might be able to “fudge” all three conditions in a manner that satisfies the international community but probably not Netanyahu.

Q. In order for unity to happen, it would appear that Hamas has to change. Has this happened?

A. Here we are back to “fudging”. Hamas is Islamist; as such, it cannot accept Israel’s existence (on the sacred Islamic soil of Palestine) without ceasing to be Hamas. Its recent modification of its charter was precisely such an exercise in obfuscation, designed to facilitate reconciliation with Fateh and greater acceptance by the surrounding Arab world and the international community, yet without foregoing the basic Islamist tenets of Hamas’s ideology. Apropos fudging, there can be little doubt that the end product of the current negotiations on this issue, if they succeed, will upon close perusal prove contentious and highly controversial.

Q. How would success or failure in this reconciliation attempt correlate with the likelihood of Islamist violence against Israel?

A. It is difficult to predict whether and how different possible outcomes might contribute less or more to Palestinian Islamist violence against Israel. If the talks fail, Hamas could renew rocket and/or terrorist attacks to embarrass Fateh and signal that Gaza’s horrific humanitarian situation cannot wait. Yet if the talks succeed, one outcome could be a freer hand for Hamas in the West Bank and that could mean Hamas terror attacks against settlers there.

Deja vu. In the spring of 2014, Abbas initiated a reconciliation attempt with Hamas to signal to the Obama administration that its two-state-solution proposals were unacceptable. Hamas exploited its renewed entree to the West Bank by kidnapping three settler youths, thereby triggering an escalation that ended up by July 2014 in the most recent Gaza-Israel war. Note, in this connection, that the Hamas delegation to the Cairo talks is led by Saleh Arouri, the new Hamas political number two, who is from the West Bank, was responsible for the 2014 kidnappings, and is on Israel’s most-wanted list.

Many Israeli security authorities cannot help but viewing Arouri’s two new jobs as a signal of Hamas’s violent intentions for the future. On the other hand, Arouri’s new positions may simply represent an attempt by Gaza-based Hamas leader Yahya Sinwar, himself a former terrorist, to keep all the relevant Hamas camps happy and in balance while negotiations proceed.

Finally, successful negotiations that genuinely bespeak an end to Hamas violence would almost certainly provoke an armed response against Israel by a variety of more extreme Islamists, some linked to ISIS, who have taken root in the Strip. Would Hamas finally and effectively confront them? Would Fateh, if and when it has taken over security duties in the Gaza Strip?

A. Success will certainly encourage the Trump team to persist in searching for a peace formula. The Netanyahu government and the moderate Sunni Arab states will all have to acknowledge that the Palestinian partner to an agreement is finally able, at least in theory, to “deliver” on all the lands designated for a Palestinian state. Hamas has failed abysmally to administer the Strip and its two million inhabitants economically. If it now yields to the more pragmatic Fateh, the world may again begin to cultivate some hope for a Palestinian state.

Q. Apropos a two-state solution, is the notion of a fragmented Palestinian state (geographically, between the West Bank and Gaza with Israel in-between) any more realistic now than was in the past?

A. If there is an intra-Palestinian unity agreement and if serious two-state negotiations are subsequently renewed with US sponsorship (two huge “ifs” that at this juncture look doubtful), this issue will again come to the fore. Back in the days when the Rabin, Peres, Barak and Olmert governments engaged in such negotiations with the PLO, the scheme that was usually floated was for a 43 km.-long (27 mile) land bridge to link the two parts of the future Palestinian state. It would cross Israeli territory in the form of a tunnel and/or elevated road/rail and utilities connection and would, after a successful security transition period, enjoy some version of extra-territorial status.

Would this work? Attempts elsewhere in the world to maintain two separated segments of a single sovereign state, such as Pakistan before the secession of Bangladesh, failed. On the other hand, Alaska functions perfectly well as part of the United States. A great deal would depend on two factors: first, the tranquility of Israeli-Palestinian relations; and second, Palestinian success at state-building under difficult geo-political circumstances.

Q. So where do we go from here?

A. Watch what emerges from the Cairo talks and follow whether and to what extent Hamas and Fateh compromise, particularly regarding the key issue of Hamas’s military forces and intentions toward Israel. And keep in mind the long-term big question: can Hamas, at heart an anti-Semitic, violent Islamist movement, actually change?

Also, watch for dissident Fateh leader Mohammed Dahlan to make an appearance at some point. Dahlan, who is anathema to Abbas and persona non grata in the West Bank, is a favorite of the Egyptians. The uber-wealthy United Arab Emirates, a country capable of bailing out Gaza, will probably condition its post-agreement aid on a role for Dahlan, who is a Gazan and is making inroads toward establishing a relationship with the current Hamas leadership.

Note, though, that in a recent interview the relatively pragmatic and moderate Dahlan expressed great pessimism about the feasibility of a two-state solution. He cited West Bank settlements--which Netanyahu now insists must remain in place under any solution--as a major obstacle.