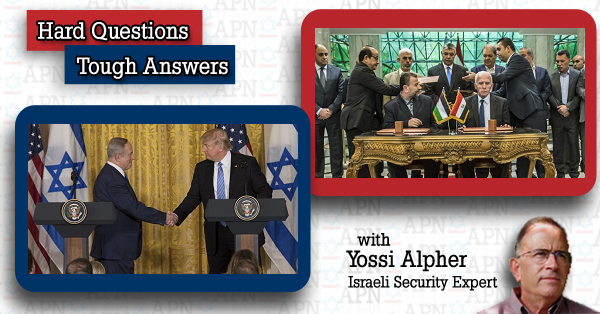 Q. Last week witnessed a Palestinian unity agreement, President Trump’s decision not to certify the Iran nuclear deal, a US decision to withdraw from UNESCO, and more escalation between the US and North Korea. Is there an Israel angle everywhere, even regarding North Korea?

A. Yes. But let’s deal with North Korea last insofar as it is the least proximate to Israel. The most proximate is the Palestinian unity deal signed last week in Cairo.

Q. Indeed, why has the Netanyahu government’s response to the Cairo agreement been so low key? Fear of Washington?

A. Yes, but also fear of Cairo, as well as confusion and hesitation regarding the possible tradeoff we are witnessing. In a best-case scenario, we are on the cusp of a radical reduction in the threat of war emanating from Gaza on the one hand, balanced on the other by the reemergence of pressures on the Netanyahu government to engage in a peace process with a united and representative Palestinian Liberation Organization.

Netanyahu and his right-nationalist-messianic supporters do not want a peace process in which they confront a strong Palestinian partner, particularly one whose unity efforts have won it the support of Egypt and the US. Yet they can hardly be seen to be scuttling the PLO’s reconciliation effort, particularly if it appears to guarantee relative quiet on the Gaza front where Israeli governments have never had a viable strategy for avoiding violence beyond hoping for the best. Nor can Netanyahu readily interfere in the Palestinian unity process sponsored by Egypt without angering that key strategic partner. Rather than intervene, an Israeli security delegation reportedly visited Cairo at the height of last week’s Fateh-Hamas negotiations there, most likely to ask Egypt to press Hamas to exchange prisoners and combatants’ physical remains with Israel as part of the process.

Then there is Hamas’s readiness to allow Fateh, meaning the Palestinian Authority, to reopen the border crossings between the Gaza Strip and its neighbors, Egypt and Israel. A European force, EUBAM Rafah (European Union Border Assistance Mission in Rafah), created 12 years ago for the purpose of monitoring the Gaza-Egypt border, has been taking in the Mediterranean sun patiently on the beaches of Ashkelon for the better part of a decade while waiting to resume this important task. Why should Netanyahu risk antagonizing the EU by objecting?

After all, Netanyahu is aware that the Palestinian agreement leaves so much unfinished business between Fateh and Hamas that it is likely to collapse. Israeli security authorities assess this will happen within a few months. So why risk being accused of interfering? Hamas’s military wing is still not a part of the agreement and could initiate aggression against Israel at any time--notwithstanding leaked but decidedly unofficial Hamas protestations that from herein Palestinian military action will be coordinated within the PA.

Last week’s agreement says nothing about Hamas relinquishing control over its Gaza attack tunnels, rocket factories and naval commandos. The joint Fateh-Hamas committees established to oversee the transfer of administrative power in Gaza to the PA do not even have dates for convening. A mechanism for integrating Hamas into the Palestinian Liberation Organization--officially, the PLO and not the PA is Israel’s Palestinian negotiating partner--does not yet exist. Arrangements for new comprehensive Palestinian elections in which Hamas participates exist in theory only.

Still, Palestinian leader Mahmoud Abbas can now inform Brussels and particularly Washington that he will soon represent a united Palestinian Authority and united PLO. Egypt can trumpet its renewed Arab leadership role. The Netanyahu government response is limited to reminding everyone that “Any reconciliation between the PA and Hamas must follow international agreements and the Quartet’s conditions--beginning with recognition of Israel and disarmament of Hamas”.

From Netanyahu’s standpoint, this is a wise move. If the agreement fails, Israel cannot be blamed. If, on the other hand, it gathers momentum and generates pressures from Cairo, Brussels and particularly Washington to prepare to facilitate Palestinian elections and to negotiate with the next Palestinian government, Netanyahu will cross (or double-cross) that bridge only if and when he has to. Meanwhile, in the ensuing months a lot can happen in the Middle East and in Israeli politics to put all this in a different perspective--for starters, trouble on Israel’s northern front and corruption investigations against Netanyahu that trigger elections.

Q. Last week, Trump “decertified” the Iran nuclear deal, to applause and praise from Netanyahu. Beyond Trump’s rhetoric, which for the time being changes nothing, how might this affect Israel?

A. Aside from Netanyahu most Israeli security experts, like their counterparts in America, advocate leaving the Iran nuclear deal, the JCPOA, alone. They recognize that by postponing any likely Iranian attempt to go nuclear, the deal well serves the goals of all those worried about Iranian aggression. Not so Netanyahu, who hastened to praise Trump’s decertification announcement while ignoring the fact that this actually accomplished little beyond rhetoric. So the ultimate effect is to leave Netanyahu squarely in the isolated and dwindling camp of Trump supporters globally and in the US.

On the other hand, Trump’s decision to impose economic sanctions on Iran’s Revolutionary Guards Corps could legitimately be welcomed by Netanyahu along with all those in the Arab world who have witnessed the Guards’ rampage in Syria. Israel in particular has a long score to settle with the Guards over their involvement in terrorism against Israelis and Jews worldwide.

Where does this leave Israel? Taking these two Trump announcements together, former deputy defense minister Ephraim Sneh argued effectively on Sunday that what is missing is “a definition of the overall objective of American strategy. It should be preventing Iran from establishing regional Middle East hegemony”--for example, in Syria and Iraq where Trump is broadly yielding to Iran and its Russian ally (see below). But Trump does not think strategically about the Middle East or anything else.

If Netanyahu did, he would recognize that Trump’s announcement last week regarding the Iran nuclear agreement sends a clear signal that the US does not uphold its solemn international agreements and undertakings. This is highly relevant to a potential Israeli-Palestinian deal--even a partial deal calling, say, for an Israeli withdrawal from part of the West Bank--that involves American security guarantees for Israel.

One additional alarming aspect of the Israeli discussion of Trump’s Iran announcement last Friday is that it almost completely ignores Trump’s lack of credibility and his inability to contemplate the complexities of international affairs. Israeli politicians and commentators tend to treat Trump’s refusal to certify the Iran deal as if it’s engraved in stone, while in fact it is barely carved in a thin layer of ice that is being melted by global climate change. It was revealed in the past two weeks that Secretary of State Tillerson called Trump a “moron” and key Senate Republican Bob Corker described the White House as “an adult day-care center”. This is the leader Netanyahu puts his faith in, and whose decisions the Israeli prime minister apes.

Q. The US also announced last week that by the end of 2018 it would leave UNESCO. Prominently, that UN agency’s blatant bias against Israel was cited as a reason. How might this affect Israel?

A. Netanyahu, who was caught off guard by this Trump administration announcement because Trump did not bother to inform him in advance, immediately aped this one too by declaring that Israel would also make preparations to leave UNESCO by late 2018. Here Netanyahu ostensibly had little choice: if Israel’s ally and the leader of the free world abandons UNESCO because of its anti-Israel bias, obviously Israel has to follow suit. Right?

Wrong. UNESCO with its huge Arab/Muslim voting bloc truly is blatantly unfair to Israel in many of its one-sided resolutions. Still, most of those resolutions have little practical effect. Further, the US threat to leave apparently helped elect Audrey Azoulay to the post of UNESCO director general. Azoulay, a former French minister of culture, is Jewish. In winning the post, she defeated a Qatari known for his anti-Semitic remarks. Audrey’s father, Andre, is a close adviser of Moroccan kings. Both Azoulays are friends of Israel.

An Israeli walkout is hardly the welcome that Ms. Azoulay deserves in her new post. Surely Israel, which reaps benefits from UNESCO despite its isolation within that and additional international organizations, should think long and hard before actually leaving one--regardless of its perceived need for solidarity with a dysfunctional and disruptive American president.

Q. Finally, back to North Korea.

A. Essentially, in looking at North Korea through Israeli eyes we are looking at the significance of possible precedents in American responses.

The Israeli security establishment is following the North Korea nuclear drama closely, and for significant reasons. First, the US security commitment to South Korea and Japan in some ways parallels its commitment to Israel. How Washington stands by its Far East commitments at this time of growing crisis could tell Jerusalem something about the way the Trump administration might address an Iranian threat to Israel from Syrian territory or even a Russian threat.

So far, the record is bad and Israel has been disappointed. The administration in effect abdicated a role in the Russian-sponsored security arrangements taking shape on Israel’s border with Syria. Nor is this readiness to abandon responsibility in the Middle East limited to Israel and Syria. The US, having trained and armed both Iraqi and Kurdish Peshmerga forces, now appears to have abdicated any active role in preventing Iraqi Army-Kurdish fighting in northern Iraq in the aftermath of the Kurdish referendum. Here a far more urgent crisis has also been turned over to Russia and Iran.

Then there is the question of President Trump’s resolve regarding North Korea’s nuclear capabilities. If he is seen to back down here from his bombastic threats, might he not also ultimately back down regarding Iran?

Finally, weapons performance. If it comes to war on the Korean Peninsula, Israel will want to learn from the Pentagon about the performance of North Korean missile and cyber technologies that for decades have been sold to Iran and Syria and that can be used against it. How well did South Korean shelters and civil defense tactics protect against the North’s missiles and what lessons can be drawn regarding Israel’s preparations against missile and rocket attack by Hezbollah? And how did American weaponry perform, particularly advanced aircraft operated as well by the Israel Air Force?

A. In following the Trump line with its inconsistencies, ambiguities and counter-productivity, Israel is liable to perform poorly and suffer serious setbacks as it deals with these and additional regional and global challenges. But Netanyahu long ago maneuvered himself into a strategic corner where he seemingly can contemplate no alternative.