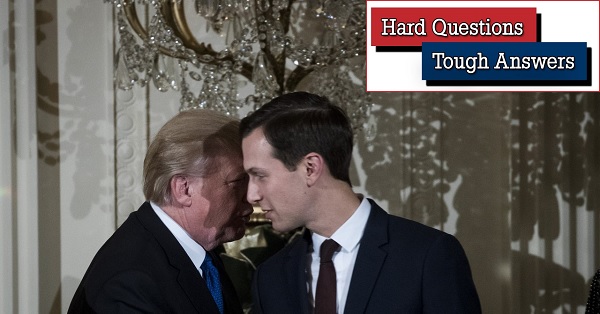 Q. President Trump just avoided war with Iran by backing off from attacking after Iran downed a US drone over the Persian Gulf. How does this decision sit with Israeli political and military leaders?

A. Israel is maintaining a relatively low profile regarding the current tension at the Strait of Hormuz. PM Netanyahu has actually briefed his Cabinet to avoid any public pronouncements on the issue while he himself offers generalized support for Trump’s anti-Iran stand. This is probably as good a way as any for Israel to avoid getting hopelessly entangled in the contradictions implied by both its own and Washington’s statements and actions.

Militarily, to be clear, Israel is anxious to avoid any sort of US-Iran strategic conflict that might spill over and escalate into conflict between Israel and Iran/Hezbollah. That would mean tens of thousands of Hezbollah rockets launched from Lebanon deep into Israeli territory. Hezbollah, backed by Iran, would seek to overwhelm Israel’s anti-missile defense systems (Iron Dome, David’s Sling, etc., all designed to intercept varieties of incoming missiles). Iran’s Revolutionary Guard could join in with missiles fired from Iraqi territory. This would very likely cause widespread civilian casualties and damage in Israel and could strike a mortal blow at Netanyahu’s reelection chances. Hezbollah could again turn to terrorism globally against Israeli and Jewish targets.

Q. Why doesn’t Netanyahu say this openly and ask Trump to be more careful in the Gulf?

A. Netanyahu can hardly voice this assessment openly and publicly. After all, he and Trump go back a long way in their joint approach to Iran. Trump revelled in Netanyahu’s attempts prior to 2015 to undermine the JCPOA--the Iran-nuclear deal. Now Netanyahu backs Trump’s sanctions.

Besides fear of a Hezbollah missile strike disrupting Israel’s elections and inflicting heavy casualties, the Israeli security and intelligence establishment (and presumably, in his heart of hearts, Netanyahu) has at least four good reasons to be wary of Trump’s decision-making regarding Iran.

First, because the JCPOA really did benefit Israel by postponing nuclear confrontation with Iran, whereas Trump appears to be hastening both Iran’s nuclear breakout and that confrontation.

Second, because late last week Trump appeared to be making contradictory decisions (“attack”, “stand down”) based on messages from cable news pundits or on fake news (e.g., the alleged Iran-Qaeda connection). At some point in the not-too-distant future Israel could feel the sting of this truly embarrassing style of so-called strategic decision-making. That style emerges not merely from Trump’s ignorance but also from the contradiction implicit in his pledge to both withdraw from the world’s conflicts and (Iran, North Korea, Israel-Palestine) to solve them with “deals” backed up by sanctions and threats.

Compare Trump’s style, if you will, with Iran’s carefully calibrated dynamic of calling Trump’s bluff. And recall: the Persians invented chess!

Third, because like Obama in 2013 in confronting Syria over chemical weapons, an American president has been seen (then by Syria, now by Iran) to back off from a red line that he himself drew in the Middle East. Israel does not benefit from damage to US deterrence in the region. To quote Eli Wallach from the spaghetti western “The Good, the Bad and the Ugly”, “You wanna shoot, shoot. Don’t talk.”

And fourth, because of the hint from a Trump intimate, Senator Lindsey Graham, that “There is one nation on the planet that is not going to give the Iranians the pass on their nuclear program, that's Israel. Israel will, as a last resort, attack to prevent a nuclear-armed Iran. We'll come to their aid.” Whoa, wasn’t Netanyahu’s idea that the Americans would take care of this? Now Graham is volunteering Israel for the job?

The conflict with Iran (America’s? Israel’s?) is not over. It may be just beginning.

Q. By “economic peace” you’re presumably referring to the Bahrain workshop planned for this week. True, with both the PLO and Israel (and Lebanon with its Palestinian refugee problem and Hezbollah influence) absent, the workshop can hardly advance the cause of peace. But what harm can it do?

A. As the Palestinians see it, with both Trump and Netanyahu advocating final status positions they reject and punishing them economically, the workshop is a slap in the face--not an incentive. Of course, all of Israel’s neighbors would like a piece of the $50 billion in aid and investments that Jared Kushner is dangling. But they all know that the diplomatic plan designed to complement the economic scheme is so short on satisfaction for the Palestinians as to be a non-starter.

Even Kushner now hints he knows this, which may explain why Israel’s second round of elections isn’t the only reason for the Trump administration to postpone unveiling the diplomatic plan. That Trump and company could treat the Israeli-Palestinian conflict with its deep historical, religious and geostrategic roots as an exercise in buying peace through prosperity is almost beyond comprehension.

Worse, we need to refresh our memory. What happens when well-meaning Americans try to advance an Israeli-Palestinian peace process and fail? Unfortunately, more often than not, violence. Recall the July 2000 Camp David failure and the second Intifada that followed in September 2000. Recall Secretary of State Kerry’s failure in the spring of 2014 and the Israel-Gaza war that erupted in July 2014.

Recall, also, the Arab-Israel economic conferences in Casablanca, Amman and Cairo that followed the Oslo breakthrough in 1993. Shimon Peres’s detailed and realistic plans for “New Middle East” regional economic development were all praised, then rejected, by an Arab world that insisted on a political solution first. According to Sever Plocker, Yediot Aharonot’s very knowledgeable economic commentator, Kushner’s plans are by comparison overly bombastic, unprofessional and financially distorted.

Turning to the present, how will Palestinian leader Mahmoud Abbas (Abu Mazen) deal with the fallout from Bahrain: all that money but no hint of progress. A West Bank-Gaza land bridge costing $5 billion when the PLO and Hamas can’t talk to one another? Nine billion dollars for Egypt to create employment for Gazans in Sinai when Egypt can’t defeat ISIS there and fears a ploy to attach part of its sovereign territory to a Palestinian state?

Abbas at least wants a genuine peace process. How will Hamas in Gaza, which opposes two-states, deal with the fallout from Bahrain? In the run-up to the Bahrain workshop, Hamas is threatening violent protests. In response, Israel and Qatar are bribing Hamas with projects for additional electricity and water supply in return for peace and quiet. Abbas, who boycotts Hamas, is fuming.

Unrest, instability and economic distress are rampant in both parts of Arab Palestine. When the violence erupts, remember Kushner.

A. MESA--Middle East Strategic Alliance--is an American idea proposed officially by Saudi Arabia in 2017 for galvanizing Arab opposition to Iran: a kind of Arab NATO. That way Trump would be able to keep his promise to humble Iran (regime change? a far better JCPOA?) without deploying US troops toward that end.

MESA “would serve as a bulwark against Iranian aggression, terrorism, extremism and will bring stability”, stated a US National Security Council spokesperson last year. The actual term MESA was officially presented by US Secretary of State Pompeo last January in a speech at the American University of Cairo. On April 8, Saudi Arabia hosted a preliminary organizational meeting with the participation of the UAE, Bahrain, Oman, Qatar, Jordan and of course the United States. Pompeo is now in Saudi Arabia and the UAE to continue discussions of organized pan-Arab opposition to Iran.

Is this a realistic idea? Absolutely not.

After all, the Gulf Arabs are already organized into a Gulf Cooperation Council which has failed to establish an effective joint military force. Jordan has already turned down an invitation to join the GCC. The Saudis and Emirates are leading an economic boycott of fellow GCC member Qatar. Kuwait and Oman remain faithful to a non-aligned position regarding Iran. And Oman is a frequent go-between and mediator in regional disputes; it helped launch the JCPOA a few years ago and hosted Netanyahu a few months ago.

Further, Saudi leadership for such an enterprise is a total non-starter. Saudi strategic decision-making capabilities have repeatedly been called into question by the inclination of Crown Prince Mohammed bin Salman to shoot from the hip, e.g., in apparently giving the order to butcher journalist Jamal Khashoggi in Istanbul and in briefly kidnapping Lebanese PM Saad Hariri. Saudi military capabilities have failed completely in Yemen; the term “paper tiger” comes to mind.

The only capable military forces among those invited to form MESA are the UAE and Jordan. Neither is about to subordinate its decision-making to an “Arab NATO”.

A. The bottom line should worry not only Israelis and not only Israel’s supporters but anyone with an interest in a peaceful and stable Middle East. One looks at these three Trump administration projects in the Middle East and has to conclude that neither the president nor his advisors has a clue as to what makes the region tick.

This is not a new phenomenon. Bush 43’s 2003 invasion and occupation of Iraq were a major trigger for the 2011 Arab revolutions and for Iran’s hegemonic drive into the Levant since then. Obama’s climb-down from his Syria chemical warfare red line has already been noted. He also offered initial encouragement for the “democratizing” influence of the Egyptian Muslim Brotherhood and Turkey’s Erdogan that proved badly ill-considered.

In Trump’s favor we have to note what appears to be his instinct to recoil from the option of using force in the region. That was evident in his response to the drone downing. Yet his style, his rhetoric, his total absence of strategic thinking, sent a very different message, not only to Iran and not only to the Gulf Arabs but to Israel as well.

Trump flinched. He thereby encouraged Iran to antagonize the US and possibly Israel again, next time more forcefully. Trump doesn’t even understand the dynamic he launched by pulling out of the JCPOA and threatening Iran. He won’t listen to anyone who tries to explain it.

This can only get worse.