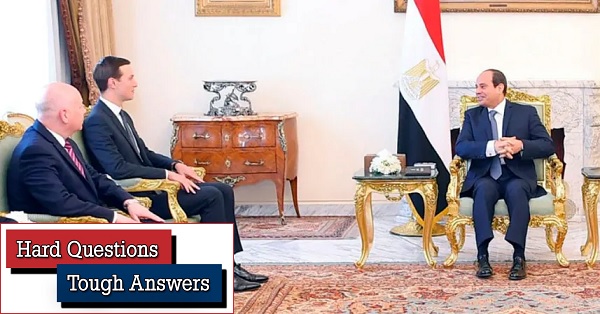 Q. Last week you looked at a number of schemes designed to enhance PM Netanyahu’s international image in the eyes of Israelis as elections near. Have there been new developments here?

A. This appears to be a constantly evolving scenario involving multiple regional and international actors. A key constant is Israel’s second 2019 election on September 17.

A. One dramatic report in the Israeli media, not confirmed by the US, places a number of Arab states, led by Saudi Arabia, at a Camp David summit in early September devoted to Israeli-Palestinian peace. This would apparently constitute phase B of the economic peace summit convened by Trump envoy Jared Kushner in Bahrain last month. Netanyahu would not attend, thereby enabling Kushner to expand Arab participation, but “vibes” from the summit concerning Arab financial incentives for Palestinian concessions would presumably upgrade Netanyahu’s peace profile and global reach.

Apropos positive Arab vibes ostensibly directed at Israel, there is an interesting Iranian angle. Last month, Bahraini Foreign Minister Khaled al-Khalifa stated in Washington that "If it wasn't for Iran being present--Iranian soldiers, Iranian money, Iranian support for Hamas and jihadis that take control of Gaza--we would have been much closer to achieving a better peace between the Palestinians and Israelis, and we would have a better chance."

Q. That sounds complicated. Can you deconstruct that statement and explain its strategic significance, if any?

A. When you look at Bahrain, think Saudi Arabia, Bahrain’s patron and financial and security guarantor in the Gulf region. This is Saudi Crown Prince Mohammed bin Salman talking via Bahrain, almost certainly in close consultation with Kushner.

The US, lest we forget, is locked in an economic and potentially military conflict with Iran over the nuclear issue and the Trump administration’s demand to change the regional behavior of the Islamic Republic--if not the Tehran regime itself. Iran’s response is unfolding in the Persian Gulf almost daily in the form of provocations against third-country oil shipments.

Now the US is trying to argue that, far beyond the Gulf and the Syria/Hezbollah arena to Israel’s north, Iran is a major actor in the Israeli-Palestinian conflict. “The Iranian regime has exploited the Israeli-Palestinian conflict for decades--profiting from the chaos and violence to advance its malign activities and influence in the region. A successful peace agreement would be the Iranian regime's worst nightmare” wrote Jason Greenblatt and Brian Hook late in July. Note the co-authorship: Trump’s point-men for Israel-Palestine and Iran.

None of these statements rings true: Iran is peripheral to the Israeli-Palestinian conflict, which raged when Iran under the Shah was friendly to Israel. Nor will these statements or even an Israeli-PLO peace agreement deter Islamist Iran from supporting Hamas and Islamic Jihad in the Gaza Strip. Iran can be counted on to continue arming Gaza-based Islamists. It certainly could incite or encourage them to attack Israel with their rockets and missiles in the event of an open conflict to Israel’s north with Iran itself and Hezbollah. Pro-Iranian Hamas leader Salah al-Aruri stated last week that “Hamas is the front line of defense for Iran”.

Yet talk and bluster are cheap in the Middle East. And in the White House. If these statements convince you that the Israeli-Palestinian conflict is all about Iran rather than about the heart of the Israel-Arab conflict with its growing religious extremist expressions on both sides, that is precisely the ‘win-win’ that both Bibi and Trump are seeking. Trump and his team, who think only in business terms about complex conflicts like Israel-Palestine and Iran, now appear to be trying to merge the two.

If blame can be pinned on Iran for a major aspect of the Israeli-Palestinian conflict, then Trump has another reason to oppose Iran, while Netanyahu is absolved from making any effort to resolve or at least alleviate the conflict. All the more so when Iran’s Arab enemies from the Gulf, led by Bahrain (read, Saudi Arabia), are working diligently with Kushner to find imaginary economic “solutions” (the “deal of the century”) for a conflict that is strategic, religious and territorial but not economic. Meanwhile, the US campaign against Iran has gained another rationale: not just Iran’s nuclear designs and its aggression against America’s Arab allies, but Tehran’s ugly involvement in fomenting aggression against Israel from Gaza.

Q. Does anyone in Israel take all this seriously?

A. Given that these elections are mainly about Netanyahu and perhaps secondarily about issues of rule of law and religion and state but not about the Palestinian issue, this is a good question.

First, to set the record straight: Hamas is the Palestinian Muslim Brotherhood, Gazans are Sunnis, not (like Iran and Hezbollah) Shiite Muslims, Hamas’s primary raison d’etre is the elimination of Israel and not the glorification of Iran, and Hamas will continue to oppose Israel with or without Iranian support.

Second, the idea behind the Trump-Netanyahu Iranian-Palestinian win-win appears to be, from the Israeli standpoint, to paint Netanyahu as a wise global statesman who deserves to be reelected.

Here, by way of taking this seriously, is Yediot Aharonot’s Ben Dror Yemini, a right-of-center commentator and occasional Netanyahu skeptic: “With the passage of time it seems that just possibly there is something in the deal of the century. Circumstances keep changing. The enemy of most of the Arab world is Iran, not Israel. Israel is becoming a strategic ally. . . . Criticism of the Palestinians in the Arab world is becoming more severe. . . . Slowly, too, the outlines of the deal of the century are becoming clear. Not just the economic plan launched in Bahrain. At the political level the idea is not for a [Palestinian] state, but autonomy. That’s what was revealed recently by David Friedman, who is not just US ambassador to Israel but a member of the team working on the plan.”

Q. So some Israelis are beginning to take the Iran connection seriously. But how does Netanyahu’s election effort benefit from Trump’s autonomy plan for Palestine--a scheme that not only the Palestinians but the entire Arab world reject?

A. Last week, in an extraordinary move, Netanyahu’s transition-government Cabinet unanimously approved the construction of 700 housing units for Palestinians in Area C of the West Bank. Area C, encompassing nearly 60 percent of the West Bank, is completely controlled by Israel, which builds and expands Jewish settlements there. Israel definitely is not in the business of building homes for the 200,000 or so Palestinians who live there. On the contrary, on occasion it destroys Palestinian homes, for example at Wadi al-Humus adjacent to the East Jerusalem neighborhood of Sur Bahr two weeks ago.

To placate some of his more extreme Cabinet members from the ultra-nationalist messianic right, Netanyahu also proposed, and they approved, construction of 6,000 more units in Area C Jewish settlements. But still, why approve new Palestinian homes in that major part of the West Bank that Israel controls?

Q. And why now, at election time, when Netanyahu needs votes from settlers and those who advocate Israeli annexation of the West Bank?

A. Here is the narrative that Netanyahu presumably sold to his ministers. President Trump, the greatest ally we have ever had in the White House, needs a gesture from us to show that we care about the welfare of Area C Palestinians. After all, when under Trump’s deal of the century plan we annex Area C, these people will become Israeli citizens. We also need to make a gesture that will show the Europeans, our most important critics on the Palestinian issue (they are, after all, our biggest trading partner, not the US), that we don’t just dismantle Palestinian homes in Area C--we also build homes. Of course, it will take years to plan and build these dwellings and a lot can change in the meantime.

What do we get in return for this decision? First, Trump’s blessing for holding on to Area C with its tiny Palestinian population and limiting the 2.5 million or so Palestinians in the rest of the West Bank (areas A and B) to “expanded autonomy”. And second, Trump is engineering closer security relations between Israel and the Gulf Arabs.

A. It is, for three reasons. To begin with, the most moderate West Bank Palestinians will not acquiesce in autonomy. They will either continue their struggle for a state in all of the West Bank and East Jerusalem, or gravitate to a demand for equal rights in an Israel that ceases to be democratic because it is an apartheid state.

Then too, no Arab state will actively endorse a Trump-backed ‘deal’ that falls short of a two-state solution. Some of the Gulf principalities will continue to cooperate strategically with Israel and adopt a passive role toward the Palestinians. But none will view this ‘solution’ as a rationale for upgrading relations with Israel. Kushner should read the lips of Arab leaders; most are explicit and outspoken on this.

Finally, when push comes to shove and Israel finds itself locked in a serious military conflict with Iran to its north and conceivably with Iran-backed forces in Gaza, it will have no active Arab military allies. The Saudis have already demonstrated in Yemen that militarily they are paper tigers. Israel’s strategic ties with the Gulf Arabs will prove meaningless. No, on second thought, the Gulfies will happily serve as cheerleaders for an Israeli military effort against Iran--down to the last Israeli.

Note, in this connection, that the only serious Gulf Arab military power, the United Arab Emirates, is giving up on the Yemen fight and withdrawing. And so fleeting is UAE confidence in the US as an ally against Iran in the Gulf that Abu Dhabi has initiated new strategic discussions over Gulf security with the Iranians in Tehran.

But if gullible Israelis and Americans are impressed by these ‘win-win’ schemes, then both Netanyahu and Trump will benefit electorally. The rest is unimportant to the two. That the Trump-Netanyahu scheme is liable, like previous misguided and failed American interventions in the Palestinian issue (Camp David in 2000, Kerry’s mediation in 2014), to lead to renewed Palestinian-Israeli conflict, is peripheral. No one will make the connection. And if someone tries, she/he will be labeled a lefty and a purveyor of fake news.

Besides, it’s just the future of Israel as a Zionist democracy that’s at stake.