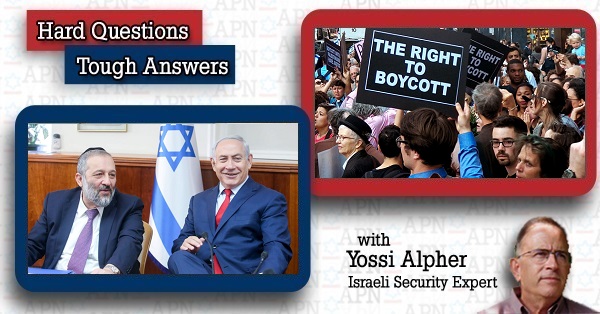 This week, Alpher discusses the main strategic issues, threats and opportunities that are likely to characterize the Middle East in the new year; the influence of outside powers; what a Korean war would mean for the Middle East; how Islam will affect Israel and the region; and what's next for Israel and the Palestinians.

Q. What are the main strategic issues, threats and opportunities that appear likely to characterize the Middle East in the new year?

A. One category involves the actions and influence of the major outside powers: the US, Russia and China. Here we must also consider possible Middle East ramifications of a clash between the US and North Korea. A second category concerns Islam: militant Islam as embodied in Iran, ISIS and al-Qaeda, but also the growing Sunni-Shiite clash.

And a third refers to Israel and the Palestinians. Here we encounter the ultimate paradox of Israel’s accelerating suicide as a rational Zionist state. That paradox is best understood only if we first look at the outside powers and Islam in 2018. As we proceed, bear in mind that the Middle East is essentially unpredictable. These are just informed assessments, subject to revision as the year unfolds.

Q. Then start with the outside powers.

A. Russia has become the most dynamic external power in the Middle East. The year 2018 should witness Moscow consolidating its grip on Syria and its military influence in the eastern Mediterranean basin. In the wake of years of Arab revolution and instability, Russia is making significant strategic inroads (nuclear power and military sales and coordination) in Egypt and potentially in Libya as well.

China, the world’s most dynamic economic power, may well emerge as the only external force willing and able to rebuild war-ravaged Syria, thereby adding it to Beijing’s sweeping “belt and road” initiative for expanding its global sway. Syria’s neighbors, particularly Israel, will increasingly have to factor both of these superpower neighbors to its north into their regional calculations.

This strategic dynamic is particularly important for Israel in light of the inconsistent and unpredictable behavior in the Middle East of the United States under the Trump administration. Taken together, Trump’s recognition of Jerusalem as Israel’s capital, his threat to withhold vital financial aid to the moderate Palestinian Authority, a demonstrated inability to deal constructively with Israeli-Palestinian final status, the virtual abandonment of Syria to the hegemonic ambitions of Russia and Iran, and the inept encouragement of instability in and around Saudi Arabia all spell a destabilizing influence in the region. As we shall see when we examine Israel’s anticipated behavior, this bodes ill for Jerusalem’s long-term interests.

A. Serious analysts and observers are no longer willing to discount the prospect of a war that involves, at a minimum, North Korea, the US and South Korea. Additional powers like China could conceivably be drawn into the conflict, which could be either conventional or nuclear. The unpredictable nature of the behavior of both the US president and the North Korean ruler is a major factor.

Q. What would such a war mean for the Middle East?

A. A prolonged and inconclusive Korean war (don’t underestimate North Korea’s staying power!) involving large multitudes of casualties would weaken and discredit the United States in the Middle East to a far greater extent than at present, thereby further boosting Russia’s strategic sway and Iran’s influence. In contrast, a dramatic American victory over North Korea would have the opposite effect of enhancing US global and Middle East influence. At a far lower level of probability, Israel’s close strategic identification with the US could conceivably make it a target for North Korean missiles, if indeed they exist at that range. Finally, if nuclear weapons are used even at the tactical level, this could open the floodgates of nuclear proliferation globally, and particularly in the Middle East.

In short, unless such a war produces a dramatic American victory, unless nuclear weapons are destroyed rather than used, and unless the Trump administration behaves rationally and responsibly, war involving North Korea would be bad for Israel.

A. Barring unlikely but nevertheless conceivable developments like a change of regime or of regime policy in Iran or a US decision to initiate conflict with Iran, 2018 will witness more Shiite extremism, more moderate Sunni behavior, and more clashes between the two. Shiite Iran’s influence will grow in Iraq and Syria and, via Shiite Hezbollah, in Lebanon. One outcome could be yet more Sunni refugees trying to reach the West. And because Iran is the only Middle East state that rejects Israel’s existence, the growing power and proximity of its forces and its proxies near Israel’s northern borders will increase the likelihood of armed conflict.

The Sunni Arab world, led by Saudi Arabia, the UAE, Jordan and Egypt, will increasingly oppose Iranian-sponsored Shiite extremism. Toward that end, the Sunnis will continue to move closer at the strategic level to Israel, though almost certainly not to the extent of normalizing relations--beyond the occasional bizarre event like a Bahraini visit to Israel sponsored by a US Jewish organization. Nor should Israel expect Riyadh and its friends, or for that matter Moscow and possibly even an unpredictable Washington as well, to do any heavy lifting for it against the Iran threat.

Meanwhile ISIS and al-Qaeda, chased from the Levant heartland, will focus on the Middle East periphery--Yemen, the Sahel states of Africa, Pakistan and Afghanistan—ensuring prolonged conflict in all these countries and regions. Turkey, increasingly Islamist in orientation, will continue searching for a new Middle East role, with occasional destabilizing results. And the autocratic Sisi regime in Egypt, facing growing economic turbulence and incapable of reining in its Islamists, will be in for a rough ride in the coming year.

Q. Finally, Israel and the Palestinians.

A. The strategic vacuum created by the extended absence of an Israeli-Palestinian peace process will continue and deepen into 2018. Of no less importance are the parallel and derivative developments.

Israel under Netanyahu, who has a fair chance to survive corruption investigations and coalition fragility through the year, will deepen its demographic and security grip on East Jerusalem and the West Bank.

Palestinian Authority leader Mahmoud Abbas will either pass from the scene this year or his grip on power will weaken further. A broad spectrum of candidates to succeed him will vie for power. They range from Hamas via current and former Palestinian security figures all the way to UAE-backed Mohammed Dahlan. This could further destabilize the scene. In any event, the Palestinian national movement will in 2018 come no closer to adopting rational compromise negotiating positions regarding the Temple Mount and the 1948 refugee “right of return”, thereby paralleling Israel’s own hard-line positions on territory.

Gaza-based Hamas may at some point this year finally decide conclusively if its future lies in political integration with the West Bank or in closer ties to radical Iran, Hezbollah and/or Sinai-based ISIS. All these options are open. By the by, another round of Gazan violence against Israel, provoking another pointless mini-war, is increasingly likely. In a worst-case scenario, a Hamas attack on Israel from Gaza in the south would be timed to coincide with an Israeli fight against Iran’s proxies and forces in the north.

Q. That accounts for the Palestinian contribution. What about Trump and Netanyahu?

A. Aiding and abetting this acute instability is the Trump administration and Arab anger at its provocations. What Trump act can conceivably follow the Jerusalem recognition and the threat to punish and impoverish UNRWA and the Palestinian Authority by withholding funds? (Yes, UNRWA is a dangerous anachronism and should be phased out, but not by throwing Gaza into even more poverty and chaos. As for the PA, weaken it and you invite anarchy and widespread violence.)

The most likely next Trump act is a Kushner/Greenblatt peace process proposal so tilted towards right-religious Israel’s territorial and economic greed that it buries everything: the two-state solution, Trump’s involvement, and Israel as a Zionist, democratic state.

Not that Trump can or will do this alone; his fellow protagonist is the Netanyahu government. As 2017 evolved into 2018 Netanyahu’s coalition was busy proposing and at times passing provocative yet ultimately impotent laws aimed at fortifying its status as the deliverer of darkness: imposing Israeli sovereignty in the settlements; a Likud party one-state solution resolution; kicking Palestinian residents out of Jerusalem; preventing future partition of Jerusalem; instituting the death penalty; and closing shops on the Sabbath. All these laws and resolutions can easily be ignored or revoked by this or future governments. All involve the deadly mixture of religion and populist ultra-nationalist politics that fuels this government. All are enhanced by assiduous coalition cultivation of the citizenry’s fears of Islam and Arab chaos and of its ultra-nationalist patriotic impulses.

The ultimate paradox of the Netanyahu government’s program for 2018 is embodied in its accelerating effort to deport tens of thousands of African asylum seekers. Granted, most of these Eritreans and Sudanese are really labor migrants. True, they entered Israel illegally. And yes, a case can be made that Eritreans can now safely return home and therefore their asylum requests should in any case be denied. On the other hand, there is plenty of work for the Africans in Israel and they are prepared to do the lowliest jobs for the lowest pay--the jobs Israelis don’t want to do.

The paradox lies in the government’s near-messianic fervor in deporting some 40,000 Africans for whom Israel ostensibly has no room, at the very same time that with equally messianic fervor it employs every devious legal and not-so-legal tactic to grab West Bank land and force millions of unwilling Palestinians to become second-class residents of an apartheid-like Israel. Israelis don’t necessarily hate Africans or love Palestinians, but you wouldn’t know it from their actions. Then too, by prohibiting entry to Israel of leaders of the BDS movement, Israel is now even excluding a number of Jews who under Israeli law have every right to come and request Israeli citizenship.

Such are the disastrous distortions of Zionism imposed by ultra-nationalist Judaism.