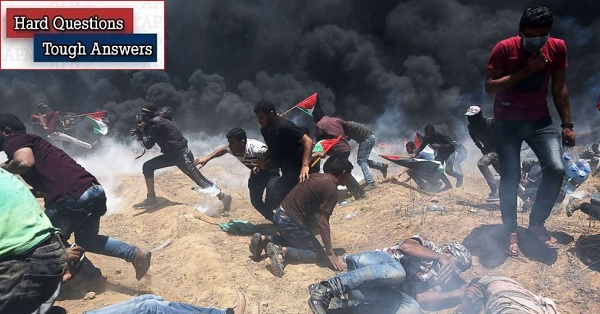 This week, Alpher discusses Jerusalem, Gaza, Nakba Day, Ramadan, Iran, and the Lebanese elections; US National Security Adviser John Bolton's statement that a US embassy in Jerusalem “enhances the chances for peace”; international opinion concerning Israel’s position vis-à-vis Iran in Syria and the Jerusalem issue; Netanyahu's influence Trump's decision to withdraw from the JCPOA; and the unanwered questions that remain.

Q. Let’s see. Jerusalem, Gaza, Nakba day, Ramadan: that’s the Israel-Palestine dimension of this week. Then there’s war with Iran in the north in the shadow of US withdrawal from the Iran nuclear deal and Lebanon’s elections. Did I miss anything? Where to start? Where to conclude?

A. From the standpoint of Israeli security concerns regarding Palestinian-related issues, this looks like a week from hell. Monday’s inauguration of a US embassy in Jerusalem, symbolizing US recognition of Jerusalem as Israel’s capital, is liable to incite Arab unrest in both East Jerusalem and the West Bank.

Monday already witnessed attempts by masses of Gazans to breach the Israel-Gaza boundary fence. Israeli efforts to rebuff them resulted in heavy Palestinian casualties. And Nakba Day is actually Tuesday, so more can be expected.

The advent of Ramadan on Wednesday this week can be depended on to further inflame Muslim emotions regarding both Jerusalem and Gaza. Weak leadership and anti-Semitic diatribes by Mahmoud Abbas in Ramallah only make matters worse. Still, reaction in the Arab world at large is likely to be more subdued. There, the entire Palestinian issue is currently pushed to the back burner due to concern--shared with Israel--regarding Iran and militant Islam. Not surprisingly, then, by early Monday afternoon the main condemnations of the embassy opening came from the Muslim extremes: Erdogan of Turkey, the Iranian leadership and al-Zawahiri of al-Qaeda. Jerusalem was quiet. But nearly 40 Palestinians had reportedly died at the Gaza-Israel fence.

Q. And on the northern front?

A. Last week’s massive Israeli air attack on Iranian military targets in Syria had to give the Iranian al-Quds force and its dynamic commander, Qasem Soleimani, pause. Thus far there has been no Iranian military response, nor has Israel openly pursued its air offensive. The outcome of Lebanon’s election last week--a small gain for Iran’s ally Hezbollah though probably not enough to change the overall delicate balance of political power--is not likely to alter Iranian calculations.

(I confess, Lebanese politics are so Byzantine and opaque as to defy logical analysis by anyone. As one astute Lebanese observer, Michael Young, put it, “Hezbollah’s greatest enemy will remain the Lebanese state, and what the elections showed is that Hezbollah, paradoxically, knows it has to be a part of that state to better escape it.” Hope that clears up the issue for everybody. . .)

Tehran also undoubtedly noticed the open support for Israel expressed last week by Bahrain, almost certainly speaking for the Saudis. The Trump administration is actively soliciting Saudi and other Arab military participation on the ground in eastern Syria. The plan is for them to replace a small US contingent that currently at least partially blocks Iranian freedom of maneuver there but that Trump insists on bringing home.

The Israel-Iran-Syria front is escalating. Unless Iran can be persuaded to revise its strategy, more and heavier Iranian-Israeli confrontations are to be expected. For Israel, the Palestinian front in and around Jerusalem and Gaza is urgent. But the Iranian front, while escalating more slowly, is strategically more important and more problematic.

Yet Israel, flush with last week’s success, must beware of overconfidence. Iran is almost certainly preparing new surprises in areas where it is strong, such as proxy-terrorism abroad. And Russia’s attitude toward the Israel-Iran conflict is still not clear; it may not be able to sit on the fence for long, and its position will undoubtedly be influenced by Trump’s dramatic decisions regarding both Iran and North Korea.

Note that the Syrian revolution that began in 2011 and gradually drew in both Russia and Iran to support the Assad regime, is now metamorphosing. The rescue of Assad was successful, albeit at a monstrous price in regime atrocities that have turned fully half the population into refugees and internally displaced persons. Still, the regime and its allies are now basically mopping up the remnants of Islamist and other opposition groups.

Yet the conflict is not over. Instead, it is drawing in more and more neighbors. Turkey now occupies parts of northern Syria. Israel is attacking Iranian targets. The US is trying to bring in Saudis and other Sunni Arabs to oppose both Iran and the remains of ISIS. Even the Iraqi air force is attacking targets in eastern Syria. Something similar, albeit on a smaller scale, has happened in war-torn and fragmented Libya and Yemen. This is a strategic development of importance for the Middle East, even if its outcome is not at all clear.

Q. US National Security Adviser John Bolton says opening a US embassy in Jerusalem “enhances the chances for peace”.

A. He also says US withdrawal from the JCPOA will hasten the collapse of the Tehran regime. Neither statement is based on rational analysis. Most Iranians support their regime, whether actively or passively. A vast majority support Iran’s nuclear program. Crediting and supporting Iranian exile opposition groups today (Bolton) is like listening to Iraqi opposition groups in 2003 (also Bolton): look where that got the US!

And if, incredibly, the Iranian regime does fall, who will take over? Almost certainly the Revolutionary Guards, who are more extreme than Mssrs. Rowhani and Zarif. Bolton should beware of what he wishes for regarding Iran.

A. This is indeed unique, yet not difficult to understand. When an Iranian or Iranian proxy mounted a feeble rocket attack on Israeli military positions on the Golan Heights a week or so ago, the Europeans quickly condemned an Iranian violation of Israeli sovereignty (even though that sovereignty is universally not recognized on the Golan). And the EU supported Israel’s hugely disproportional response against some 50 Iranian and Iranian-proxy military positions deep inside Syria. Even Russia, following a Netanyahu-Putin conversation in Moscow, looked the other way and agreed not to supply Syria with advanced SA missiles that could endanger Israel Air Force over-flights.

Meanwhile, as a bonus, Israel won the Eurovision song contest in Lisbon for the first time in 20 years despite a BDS campaign to blacklist the Israeli contestant with her over-the-top song and appearance.

Where’s the logic? Israel can make a persuasive case against Iran in the Syrian context. Iran consistently threatens to destroy Israel. Its forces are 1500 km from home on an imperialist adventure. The Sunni Arab world can support Israel on this one, just as Europe can support an Israeli Eurovision entry who represents a radical vision of tolerance.

European Union support for Israel in its Syria-based conflict with Iran is, incidentally, particularly significant in view of the UK, French and German determination to oppose the US and Israeli position regarding the Iran nuclear deal.

But the case for US preemption of the Jerusalem issue by opening an embassy is weak. The status of Jerusalem is, under the UN-sanctioned Oslo Accords, supposed to be determined in Israeli-Palestinian final status negotiations. The Trump administration claims to be readying its own proposal on final status issues for the two sides to consider. As of Monday it will have preempted and created a fait accompli regarding a key final status issue--a step whose timing and ramifications are roundly condemned and rejected by most of the international community, all the Arab states, the Israeli and pro-Israel peace camps, and of course the Palestinians. It is hard to see how this advances the cause of peace.

Of course Israelis across the political spectrum and Jews everywhere are happy to see embassies opening in West Jerusalem. No Israeli disputes the status of Jerusalem as Israel’s historic capital. It has never been the capital of any other country. From a logical standpoint, the Trump administration could conceivably make a case for recognition now if it were absolutely convinced that there is no prospect at all for resolving the Israeli-Palestinian conflict, meaning that moving its embassy simply doesn’t matter. But this is not what it tells the world and specifically the parties to the conflict. On the contrary, it still promises the “ultimate deal”.

Rather, by fulfilling yet another ill-conceived campaign promise, Trump is simply making matters worse for Israelis and Palestinians. Like with the JCPOA withdrawal, he is moving the entire Middle East closer to mayhem. I hope Israelis also notice that a Baptist pastor offering a blessing at the US embassy opening is on the record as having once stated that “all Jews will go to hell”.

A week or so from now, when the smoke has cleared from the Palestinians’ Jerusalem and Gaza protests and the Palestinian dead are buried, the Israeli-Palestinian conflict will essentially not have changed. Both sides will have slid a bit further down the slippery slope toward an ugly and violent one-state reality, with the Arab world staying largely on the sidelines. Jerusalem’s blatantly racist soccer team will henceforth be called Beitar Trump Yerushalayim: you can’t make these things up! Oh, and most US embassy and consular business will still be transacted in Tel Aviv. Did we mention fake news?

Q. Is it reasonable to credit Netanyahu with wielding far-reaching influence on the Trump decision to withdraw from the Iran nuclear deal, the JCPOA?

A. Netanyahu has campaigned consistently against the JCPOA. His cartoonish presentation of the Iranian nuclear archive some two weeks ago was timed to influence Trump’s decision. But it is also relevant to view the Iran nuclear deal withdrawal in the context of Trump’s determination to withdraw from every international agreement entered into by the Obama administration, including Pacific rim trade, global climate change and NAFTA. Netanyahu had nothing to do with these agreements.

Trump’s withdrawal from the JCPOA is, in my view, primarily a rejection of Obama’s legacy. And here it’s hard to avoid contemplating the possibility that Trump’s primary motive is, quite simply, racist resentment. . .

Q. Overall, your analysis leaves a host of dangling questions without immediate answers. . .

A. Indeed, here’s my list of open questions that will demand our attention in the weeks and months ahead. Not surprisingly, they concern Israel’s northern front where the issues are far more regionalized and internationalized, meaning there are far more unpredictable variables, than on the Palestinian front:

+ Under what circumstances is Lebanese Hezbollah liable to actively join the Israel-Iran confrontation, whether voluntarily or under heavy Iranian pressure? Will Israel’s response then drag Lebanon into the conflict?

+ How can Israel coordinate between its conflict with Iran in Syria, where Russian good will is the key, and the potential collapse of the JCPOA, where the US and EU are key?

+ Can we expect growing economic friction between Europe and the US regarding trade with Iran, or will the Europeans eventually bow to pressure from Washington as they have so often in the past? How will Israel maneuver between the EU and the US, its two biggest trading partners, in the event of a strategic confrontation between them over Iran?

+ Is Israeli euphoria over Iran’s setbacks--in Syria and regarding the JCPOA--dangerous and without foundation? Or is the Israel-Iran conflict in Syria as one-sided as it has looked so far? Can we expect Iran to cut its losses, shorten its supply lines, abandon its “forward defense” and its demographic campaign to render Syria more Shi’ite, withdraw from Syria and concentrate on reopening its nuclear program and confronting the US? Or will it knuckle down and escalate against Israel in an attempt to rally its own public, its Syrian ally and possibly Russia, and consolidate its gains in Syria?