Hard Questions, Tough Answers with Yossi Alpher (January 6, 2020) - No immunity for Soleimani. Immunity for Netanyahu? None for Israeli peace NGOs, either 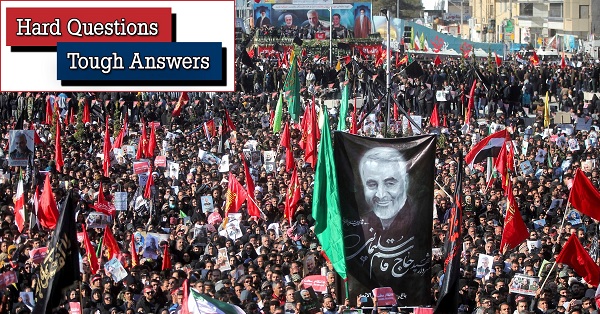 Q. American political and public opinion is sharply divided regarding the wisdom of the US assassination of Iran’s Qasem Soleimani early last Friday morning. Is Israeli opinion as divided?

A. No. With the exception of Israel’s Arab sector, opinion is near unanimous that Israel is well rid of Soleimani. This is where the Israeli and American perceptions of Soleimani’s activities differ.

The US viewed Soleimani and his Quds Force in the context of the US military presence in Iraq and Trump administration pressure on Iran regarding the nuclear issue--both highly controversial topics. True, for a few years US and Quds forces collaborated tacitly to defeat ISIS in Iraq. But for the most part, Soleimani’s Iraqi Shiite proxy forces were attacking and killing hundreds of American soldiers. The Iraqi Shiite siege of the US Embassy in Iraq, which inevitably brought back traumatic memories from 40 years ago in Tehran, was clearly the last straw for President Trump.

Yet the escalation that led to Soleimani’s assassination actually began with Trump’s ill-advised 2018 withdrawal from the JCPOA Iran nuclear deal, followed by his ineffectual economic boycott of Iran. This is understandably the critical prism through which many Americans and, indeed, most of the world, view the assassination: the US “lost” Iran long ago; now it is losing Iraq as well. In Iraq itself, Shiite opposition to Iranian influence will now disappear in favor of opposition to America. Soleimani’s death is also an effective lever for whipping up anti-American opinion and solidarity with Tehran’s troubled regime.

Trump, who inexplicably avoided retaliating when Iran attacked US and Saudi military and economic assets in the Gulf and then inexplicably assassinated Soleimani, is a loose cannon. And he is at the helm.

Q. And Israel, in contrast?

A. Israel perceived Soleimani solely as the mastermind of Iran’s drive to project power westward through Iraq and into the Levant (Syria, Lebanon), where the Quds force and its many proxies, along with Iranian missiles and drones, pose a direct security threat to Israel. Neither Trump nor Obama before him did anything about Soleimani's activities in the Levant. Indeed, Obama concentrated solely on the nuclear deal and acquiesced in an active Iranian role in the Middle East. Trump went a step further, and has been reducing the US military presence in Syria and threatening to reduce it in Iraq, much to Israel’s dismay.

It is in this context, not that of the US Embassy in Baghdad or of nuclear issues, that Israelis view the removal of Soleimani as a positive move. IDF Chief of Staff Kochavi recently (see last week’s Q & A) saw a high probability of an Israel-Iran war in Syria and possibly Lebanon and Iraq in 2020—a war that could involve highly destructive Iranian missile attacks on Israel’s cities. Soleimani's departure is likely to lower that probability at least temporarily, if only because he was a uniquely smart and charismatic strategist who will be hard to replace.

Why could the removal of a single Iranian commander have this positive effect for Israel? Not because Soleimani was the “second most important man in Iran”. He wasn’t. And not because he was planning new attacks on US forces and interests in Iraq. There is no evidence to support this claim by Secretary of State Pompeo. (Besides, the Quds Force, like the US Army and the IDF, undoubtedly has dozens of lethal contingency plans in its files.) And not because he was responsible for downing a US drone over the Gulf or attacking Saudi oil infrastructure in recent months. He almost certainly was not behind these Iranian operations.

Rather, Soleimani’s file was the Iranian drive westward. In executing it, he proved to be a strategic genius. He used few Iranian soldiers, preferring instead to muster, “on the cheap”, Shiite proxy forces from as far afield as Pakistan and Uzbekistan. When, in July 2015, he saw that Iranian intervention alone would not save Iran’s Syrian ally Bashar Assad, he traveled to Moscow and persuaded President Putin to intervene (in September 2015) and share the task with Iran. That move radically altered Israel’s strategic assessment of threats to its north.

Q. What were Soleimani’s strategic goals?

A. Iranian Shiite hegemony in Iraq, Syria and Lebanon (and possibly the north of Yemen, to pose a threat to Saudi Arabia from its southwest flank). A Persian presence on the shores of the Mediterranean for the first time in some 1500 years. And most significantly from Israel’s standpoint, the capacity to pose a strategic threat on its northern borders.

I devoted an entire chapter to Soleimani in my recent book Winners and Losers in the Arab Spring: Profiles in Chaos. Soleimani was a "winner", exploiting chaos in Iraq and Syria to project Iranian power dramatically westward toward Israel and the Mediterranean. He was a highly intelligent strategic thinker. He understood asymmetrical warfare.

Q. How will Iran respond toward the US? Toward Israel?

A. Iran has already escalated its nuclear response, further distancing it from the JCPOA nuclear deal. But as matters stood prior to Soleimani’s departure, this would eventually have happened regardless. As for a direct response, I doubt Iran will risk frontal military escalation with a US president whose unpredictability and even lack of strategic insight could, for a brief interval, prove a US asset by keeping Iran off-balance. Rather, Iran might do "more of the same" asymmetrically: attack Israel with proxies from Syria, escalate aggression against third-party targets in the Gulf, and continue its efforts to weaken or eliminate the US presence in Iraq, an effort Soleimani spearheaded.

Similarly, we might witness unattributed cyber-attacks on US infrastructure as well as missiles fired at US embassies. The short-term guiding principle will be asymmetry, the absence of direct Iranian accountability, and avoidance of escalation into open warfare with the US or, for that matter, with Israel.

Q. In a better world, with a genuine strategic-thinker as US president, what should he do at this point?

A. Follow up on the Soleimani assassination with a strategic conciliatory move. Concessions regarding a return to JCPOA would be smart. Removing US forces from Iraq would be controversial, but would reflect the obvious and inevitable conclusion that the US “project” in Iraq that began in 2003 was doomed to failure from the start. And by the by, it would fulfill a Trump campaign promise from 2016. It could conceivably result in the partition of Iraq between Shiites in the south and center and Sunnis/Kurds in the north, which would not necessarily be a bad thing for the US, Israel and the rest of the Middle East.

A conciliatory Trump move, made from a sudden position of strength, might effectively balance out the assassination and move the US-Iran relationship in a better direction for the good of all concerned. But this would require an understanding of Iraq and Iran--indeed, of the entire Middle East--that this administration does not appear to have. Further, it would require a US leader capable of thinking and projecting beyond his/her initial knee-jerk decision and addressing ensuing moves: reaction, counter-reaction, etc.

Remember: the Persians invented the game of chess.

Q. Turning to the Israeli political arena, with elections looming in under two months, where is the focus now?

A. The focus is on PM Netanyahu’s appeal for Knesset immunity, a ploy he hopes he can string out over the coming months and even years to avoid formal indictment, trial and jail. Last Wednesday, in a speech rife with hysterical accusations about “fabricated tales against me”, he asked the Knesset for temporary immunity so he could “implement my right, my duty and my mission to continue serving you for the future of Israel.”

Well, not exactly serving this writer! Still, this may prove to be an effective tactic for galvanizing Netanyahu’s base. This is exactly the sort of thing Netanyahu has done in recent days by appointing to temporary ministerial posts two of his political allies (Health Minister Litzman of ultra-Orthodox United Torah Judaism and Agriculture Minister Bitan of Likud), one of whom is also under indictment and the other expecting any day to be indicted.

But will the current Knesset deliver immunity? Here Netanyahu cannot muster a majority, any more than he could find a majority for forming a coalition after two successive elections. He is dependent on Knesset Speaker Yuli Edelstein, a fellow Likudnik with aspirations to be Israel’s next president, to manipulate this current very temporary Knesset, where there is an equally temporary majority against immunity, so as to avoid appointing a committee to consider Netanyahu’s appeal. The minute a committee is appointed and Netanyahu’s risky appeal is rejected, he is officially indicted and headed for trial.

This is a complicated maneuver on Netanyahu’s part, one he vowed very publicly a few months ago to avoid. It is liable to involve a Blue-White appeal to the High Court, whose jurisdiction Netanyahu will dispute, and could dominate the elections. The question for the moment is not whether Netanyahu can get immunity from the Knesset--he can’t--but whether, and how skillfully, he can manipulate Edelstein and the entire system so as to reach the March 2 third round, and after that possibly a fourth round, while hanging on as caretaker prime minister and staying out of jail.

Netanyahu, still “King of Israel” in the eyes of his many supporters, is behaving like the lowest of evasive crooks. His followers among the Israeli public are as culpable as he is. This is a sorry state of affairs for Israel, politically and morally.

Q. Finally, there are growing indications that Israel’s non-governmental peace advocacy organizations are losing their immunity and folding. . .

A. This is yet another aspect of the sorry state of affairs. At the end of 2019, Tel Aviv University closed its Tami Steinmetz Center for Peace Research, informing the Steinmetz family that its annual financial contribution to the Center’s budget would no longer be welcome. In parallel, two peace and security advocacy groups composed of retired senior members of Israel’s security establishment, the Council for Peace and Security and Commanders for Israel’s Security, were set adrift by the resignation of their leaders. (Full disclosure: I once belonged to the steering committee of the Council for Peace and Security; I resigned years ago.)

The primary motivation behind the apparent dismantling of these peace-minded organizations seems to reflect a number of interlocking perceptions. First, a two-state solution with the Palestinians is currently not high on the Israeli, Arab or international agenda. Second, peace with the Arab states is not likely without a Palestinian deal, while those few aspects of productive coexistence with the Arabs that are emerging are a by-product of the Iranian threat rather than of Israeli lobbying efforts for peace. And third, the Israeli public’s shrinking peace camp is not sufficiently robust to support so many peace-advocacy groups.

All the more reason to support those groups that remain, lest Israel lose its moral backbone entirely.