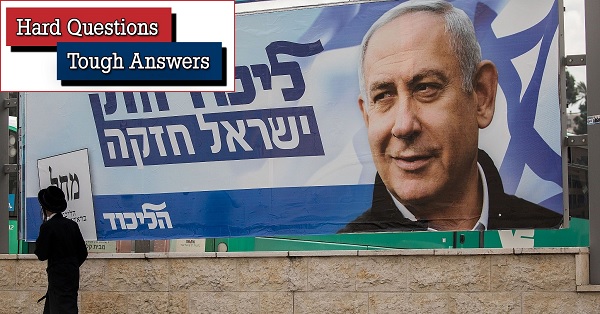 Q. PM Netanyahu appears to have emerged unscathed from Hezbollah’s response to the recent Israeli attack in the heart of Beirut. Does this boost his security profile and does the security effect boost his electability?

Incidentally, few dispute the necessity of Israel’s recent attacks in Lebanon, Syria and reportedly Iraq, all against aggressive Iranian initiatives. And few contest Netanyahu’s capable handling of Israeli intelligence and military activities against the Iran-backed threats from Israel’s north and northeast.

Rather, to the extent that he is exploiting legitimate security issues for electoral purposes, Netanyahu is looking for ways to distract voters from the near-constant revelations by major media outlets of details of the criminal charges he is facing. The polls continue to show Netanyahu’s Likud and allied right-religious parties falling short by three or four mandates of the 61-mandate right-religious coalition Netanyahu needs in order to legislate his immunity from prosecution. Hence his panicky efforts in multiple directions to augment Likud votes.

Beyond the security sphere, the distractions Netanyahu is engineering are on several political fronts. He is presenting himself as an indispensable global leader to attract voters of all persuasions. He just pledged again to annex settlements to draw settlers away from other right-wing parties. His interim government is deporting illegal aliens (Filipina caregivers and their Israel-born children) to demonstrate his devotion ostensibly to maintaining the rule of law but in reality as an outrageous sop to Orthodox and ultra-Orthodox voters devoted to Jewish racial purity. He is persuading fringe right-wing parties to drop out of the elections in favor of the Likud. And, most spectacularly, he just viciously attacked the media for its corruption revelations, smearing it for lack of integrity and lack of patriotism.

A. TV Channel 12, whose nightly news is the most popular and where Netanyahu himself was interviewed last election at his own initiative, has been revealing recordings of the testimony of former Netanyahu aides turned state’s witness against him. It has also been airing “Our Boys”, an HBO American-Israeli miniseries about the gruesome murders that led up to the summer 2014 mini-war between Israel and Hamas.

“Our Boys” focuses too much for Netanyahu’s taste on the murder by Israelis of an Arab boy in Jerusalem, and not enough on the Hamas murder of three Israeli yeshiva students in the West Bank that preceded it. Confronting the “Our Boys” narrative, together with state’s witness revelations that paint him as corrupt, Netanyahu responded with a widely-distributed clip of himself denouncing Channel 12 as unpatriotic and calling upon Israelis to boycott the country’s preeminent news channel.

Quite simply, this constitutes an unprecedented attack by a sitting prime minister on freedom of speech in Israel. It was also a calculated appeal by Netanyahu to the baser instincts of Israel’s ultra-nationalist mainstream. To their credit, mainstream media outlets like Channel 13 and Yedioth Aharonot responded with revelations of their own about the prime minister’s apparent violations of the law.

Q. And the other distractions? What is notable?

A. The Likud is understandably concerned about fringe right-wing lists that will draw away votes yet are not likely to pass the four-mandate threshold. These lists will waste right-wing votes that might otherwise augment a new Netanyahu coalition. Last week Netanyahu persuaded one of them, Zehut, to withdraw in return for fuzzy commitments by him to back part of its loopy agenda, which is pro-Cannabis, libertarian, and advocates a Jewish takeover of the Temple Mount.

Netanyahu is still working on the two remaining fringe-right lists, Noam (anti-LGBT) and Jewish Power (Kahanist-fascist). The problem with this tactic is that if these lists abandon the elections, their adherents will not necessarily vote Likud or even Yamina, a likely coalition partner. They could vote for Liberman; or not vote at all. Then too, some Likud voters could abandon Netanyahu because of these antics.

Elsewhere, to boost his global ultra-nationalist leadership image, Netanyahu is reportedly discussing with President Trump some sort of US presidential declaration regarding support for Israel in a security crisis. It will almost certainly be non-binding, reflecting very rational reservations on the part of both countries’ security establishments. A meeting with Russian President Putin is being discussed. Netanyahu is planning a brief visit to meet with India’s PM Narendra Modi.

Considering all these efforts, coupled with Blue-White’s seemingly inept campaign efforts, it is striking that, two weeks before elections, the polling picture remains static: a virtual Likud-Blue White draw, each party hovering at 30-31 mandates. The only mathematically-possible coalition at this point appears to be one that involves both of these parties. Liberman’s ten mandates give him leverage in this regard. But potential Blue-White and Liberman opposition to joining a coalition with a Likud party that is still headed by Netanyahu remains a major impediment even to this potential outcome.

Q. Returning to the security issues to Israel’s north, couldn’t US opposition to alleged Israeli anti-Iran operations in both Lebanon and Iraq cloud Netanyahu’s relationship with Trump?

A. They could cloud the Netanyahu-Trump relationship and/or they could force Israel to desist from some of its preventive attacks against Iranian proxy forces and ordnance in the Levant. In fact, the potential for US-Israel disagreements is broader, and involves US-Iran relations as well. Here we are undoubtedly going well beyond the confines of the next two weeks’ campaigning in Israel.

Trump administration officials last week leaked that recent attacks on Iranian proxy forces in Iraq and on Iranian munitions in Iraq were carried out by Israel, which has not officially acknowledged responsibility. Pentagon officials added that Iraq has the right to defend itself against aggression. Sixteen years after the US invasion and occupation of Iraq, some 5,000 American troops remain there at the request of the Iraqi government. And Baghdad seeks tenuously to balance that US presence by allowing Iran a free hand to organize Iraqi Shiite militias, to arm them, and to store on Iraqi soil additional arms destined for transfer to Iranian-proxy militias in Syria and to Hezbollah in Lebanon.

So Washington finds itself in a delicate position when it comes to Israeli attacks in Iraq. Israel’s “campaign between wars” (Hebrew: maaracha bein milchamot, or “Mabam”, a unique IDF concept) against Iran has scored successes that push the confrontation away from Israel’s border with Syria, where Iran’s al-Quds force aspires to deploy, all the way to Iraq, which borders on Iran, not Israel. But this achievement, it now emerges, comes with considerable risks vis-à-vis Washington. At a minimum, Israel has to avoid harming US troops when it (allegedly) attacks in Iraq. It also has to deal with Iraq’s complaints to its US ally regarding Israeli attacks in Iraq in general.

Something similar applies to Lebanon, where Hezbollah is now the dominant party in a coalition government that controls armed forces equipped and supported by the US. Further, Washington is mediating between Israel and Lebanon regarding their nautical boundary in a part of the Mediterranean where the Lebanese want to commence drilling for gas deposits that could financially help Lebanon, including Hezbollah. Yet Hezbollah is classified by the US as a terrorist entity. So an attack against Hezbollah attributed to Israel in Beirut some ten days ago is, like attacks in Iraq, complicated for the US-Israel relationship.

Add to this the potential for direct US-Iran talks that was broached in the course of President Trump’s participation in the recent G7 summit at Biarritz in France. This hints at the possibility of a US-Iran nuclear thaw similar to the thaw we have witnessed over the past two years between Washington and Pyongyang. While many in the Israeli security community would welcome a US return to a (presumably revised) JCPOA Iran nuclear agreement, Netanyahu most emphatically would not. After all, he takes credit for helping persuade Trump to abandon the JCPOA. Netanyahu was clearly alarmed by the visit to Biarritz during the G7 of Iranian Foreign Minister Mohammad Javad Zarif—even if “nothing happened” there.

Q. Yet not only Netanyahu but the Israeli security community as well is alarmed by the Pentagon’s discomfort over Israeli attacks in Iraq.

A. Indeed. While Trump can flirt with the idea of a thaw with Iran, on the ground in the Levant Iran and its allies and proxies remain in the eyes of the Israeli security community an existential threat to Israel. Netanyahu and Russia’s President Putin have managed thus far to coordinate Israeli attacks against Iran in Syria, where Moscow is dominant. Can Netanyahu (or his successor) and Trump do the same regarding Iraq and Lebanon? Or will Israel come under American pressure to back off from both arenas? And if so, what will Israel do?

A. Elections in two weeks. Anything can happen.