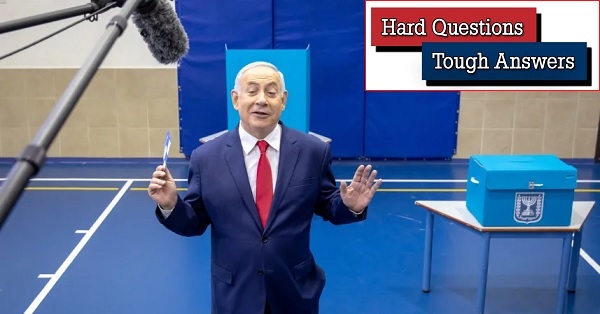 Q. Why is PM Netanyahu trying, just days before elections, to pass a law allowing party activists to take photographs at all polling stations all day long during election day, September 17?

A. According to the rationale Netanyahu and the Likud are spinning for this last-minute initiative, due to voting irregularities by Arab citizens of Israel last time around, on April 9, the extremist Balad party passed the voting threshold illegally, by cheating, at the expense of the Netanyahu-allied New Right, which therefore did not pass the threshold. The result was that Netanyahu was unable to put together a coalition of at least 61 members of Knesset. In order for this not to happen again, it is according to the Likud necessary to photograph voters entering the polls to make sure they don’t vote twice using different IDs (a typical case from the past might be using the ID of a cousin with a strong resemblance who is abroad) and to photograph vote-counting to prevent ballot-stuffing.

Voting irregularities are not new to Israeli elections, which are by design “low-tech” and use paper ballots. According to popular lore, it has always been Arab and Haredi (ultra-Orthodox) voters who “cheat”, ostensibly due to a low level of adherence to democratic norms. In fact, after the April elections the Election Commission investigated over 100 complaints, most filed by the Likud, and reportedly found only one serious infraction that actually added illegal votes . . . to the Likud list! There is no known case of Balad cheating last election.

Nevertheless, because Likud activists brought lapel cameras to Arab polling stations in April, thereby causing widespread intimidation, disturbances and protests, the Election Commission decided that from herein it would act on this issue. Some 3000 of its own non-party election inspectors will visit the country’s 13,000 polling stations on election day and take photographs in accordance with an agreed protocol. The Likud representative on the Commission, David Bitan, a Netanyahu ally, approved this procedure.

The Election Commission, the attorney general and the Knesset legal adviser all oppose Netanyahu’s current legislative initiative. Supreme Court Justice Hanan Meltzer, who heads the Commission, stated last week that the Likud law would “generate chaos at the polls.” Last-minute legislation to permit wholesale photographing at polling stations almost certainly either won’t pass in the Knesset or will be disallowed by the High Court, if only because the current government is a transition body not qualified to legislate.

It emerges, then, that Netanyahu’s initiative is a transparent attempt, taking a leaf from President Trump, to delegitimize in advance an election that Netanyahu fears he will lose. Netanyahu, who could be convicted and imprisoned unless a willing coalition gives him immunity, is by-the-by trying to further delegitimize the rule of law in Israel--particularly Attorney General Avichai Mandelblit, who is bringing the corruption charges against him.

This is a repeat of Netanyahu’s last-minute mendacious and racist rallying cry in April that “the Arabs are being bused to polling stations in droves” and therefore Likudniks must vote. This time, implicitly, Likudniks have to get out the vote to defeat the cheaters.

A. There are many indications that the US and Iran are moving in the direction of reopening negotiations. The sense that Trump is capable of arranging a meeting with the Iranian leadership was just reinforced when it became known that Trump had intended to meet the Taliban leadership from neighboring Afghanistan. (He cancelled at the last minute; but if Trump can plan to meet a non-state actor that kills Americans and fellow Afghans, even this president’s logic might dictate that he can meet Iran’s leader.)

Any sort of US-Iran warming of relations frightens Netanyahu, who needs to portray Iran as negatively as possible in order to galvanize voters with talk of another Holocaust. That the JCPOA Iran nuclear deal severely constrained Iran’s nuclear options, that a Trump-Rowhani meeting could lead to its renewal, and that Israel’s campaign against Iran’s military moves in Lebanon, Syria and Iraq is broadly successful, are all problematic realities that get in Netanyahu’s way.

That is why, in a panic, he reportedly tried to prevent a Trump-Zarif meeting at the G7 summit in Biarritz a couple of weeks ago. That also may be why Netanyahu traveled last week to London to meet US Defense Secretary Mark Esper. At a minimum, Netanyahu needs Trump to postpone a thaw with Iran until after Israel’s September 17 election.

Q. There are indications that Netanyahu is pursuing some sort of US-Israel security pact or security commitment by Trump as a last-minute election boost. Anything wrong with that idea?

A. That may have been a second topic on the Netanyahu-Esper agenda last week. It may even tie in with a US-Iran thaw, in the sense that the US would offer Israel assurances for its security to balance a US-Iran deal. If the outcome is a Trump declaration that falls short of a defense treaty, this will merely be empty election hype devoid of real validity. Still, potential Netanyahu voters may fall for it.

An actual security treaty does not appear to be achievable in the days remaining prior to September 17. US constitutional reasons might in any case get in the way, since Israel’s lack of permanent borders with the Palestinians apparently renders a treaty with it ineligible for congressional approval.

Then too, the security establishments in both countries are wary of such an undertaking. Would Israel do a “nuclear striptease” at the Pentagon’s behest? How would US troops stationed in Iraq and US military trainers in Lebanon respond to Israeli attacks on Iranian-backed military activity in those countries? Under what circumstances would the US actually come to the aid of a country that has always proudly claimed it could defend itself by itself as long as it had the necessary weaponry?

A. It appears to reinforce the sense that there really is no “deal of the century” ostensibly to end the Israeli-Palestinian conflict. This is bad news for Netanyahu at election time. True, the Trump administration is replacing Greenblatt. But why he couldn’t wait a couple of weeks is an interesting question.

Q. Finally, the most troublesome question of all: who will win the election on September 17?

A. I don’t know. No one knows. The polls show no real “winner”, meaning that after the election complicated coalition talks could end in a variety of ways. Besides, Israeli pre-election polls are less than fully accurate. Nor can voter turnout be predicted--a vital factor.

Then too, Netanyahu is setting the stage for massive disorder on election day, massive attempts to contest vote results and balloting irregularities, and yet further efforts to discredit the gatekeepers whose job it is to ensure that Israeli democracy functions (the Election Commission, the High Court, the attorney general, even President Rivlin who has criticized Netanyahu’s anti-democratic behavior). Last week Netanyahu attacked TV Channel 12, Israel’s most popular news station, as unpatriotic and called on the public to boycott it. Now he is preemptively attacking the entire democratic election system.

To his credit, Blue-White leader Benny Gantz maintains a calm poker-face in response to Netanyahu’s panicky maneuvers while stating that “the prime minister is trying to generate delegitimization of the democratic process.” Gantz has declared that he will form a secular coalition with Likud and Yisrael Beitenu’s Avigdor Liberman. He also says he will not agree to rotate the premiership with Netanyahu but will, if necessary due to a dead heat, do so with an alternative Likud leader.

The latest polls show Likud and Blue-White neck-and-neck at 32-32.