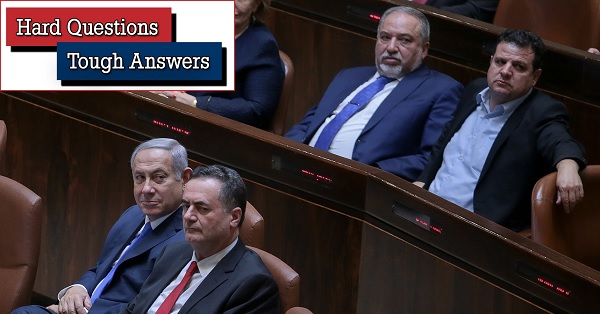 Q. Where does Israel stand with regard to the controversies that have arisen over the past ten days: the legitimacy of the Soleimani assassination, the Iranian low-key response of firing missiles at US bases in Iraq, the downing of the Ukrainian plane, Iraq’s demand that the US remove its troops, and Iran’s new steps toward abandoning the JCPOA and upgrading its nuclear enrichment program?

A. Iraq’s demand to remove US troops from its territory is very important from Israel’s standpoint. The other issues are secondary.

Israel is not participating in the discussion of the legitimacy of Soleimani’s assassination. When former US Secretary of the Navy Jim Webb asks in the Washington Post, “How did it become acceptable to assassinate one of the top military officers of a country with whom we [the US] are not formally at war during a public visit to a third country that had no opposition to his presence?”--the Israeli security community steps aside. It isn’t even bothering to offer its own fairly convincing reasons why Israel is happily rid of Soleimani, even though President Trump and Secretary of State Pompeo could use some rationales that are more convincing that their lies about impending Iranian threats.

Why can Israel step aside? Israel did not assassinate Soleimani--the US did. Iran is not at war with the US but for all intents and purposes it is at war with Israel. The question of Soleimani’s presence in a welcoming Arab country is also irrelevant for Israel, which has no relations with Iraq.

Israelis are by and large pleased with Soleimani’s removal because it weakens an immediate threat to Israel from the al-Quds force and its proxies, including Hezbollah. Note that these enemy militias have generally not threatened to exact revenge from Israel for the assassination. Even Hezbollah leader Nasrallah has declared that he will now target Americans, not Israelis. Altogether, Webb’s rhetorical (and intelligent) question may indeed be relevant to Americans. But not to Israelis--except, of course, on an important moral-philosophical level.

As for the Iranian low-key response to the Soleimani assassination, it is familiar to Israel from its confrontations with Hamas in Gaza. Hamas frequently fires a few rockets at empty Israeli territory--so empty that the Iron Dome missile interception system does not even bother wasting an interceptor to shoot them down. Hamas communicates with Israel in this way as well as via Egypt--explaining itself, coordinating temporary ceasefires.

Substitute Iran for Hamas and substitute Switzerland (on behalf of the US) for Egypt, and we have an approximate picture of what went on between the US and Iranian security communities, via Switzerland, following the Soleimani assassination: symbolic Iranian revenge and a signal that Iran wants to avoid direct escalation. Undoubtedly, Iran will now indirectly sponsor attacks on Americans by its burgeoning stable of proxies, non-state actors and non-attributable grey-zone actors; but there is nothing new here, and Iran will claim that its own hands are clean. (Already, an attack by Iraqi militias on an Iraqi airbase sometimes used by the US was reported on January 12.)

Here we can factor in the embarrassing Iranian downing of a Ukrainian passenger aircraft due to deplorable Iranian intelligence and operational errors, followed by open and vocal protests on the Iranian street. Then too, Secretary of State Pompeo has sent public signals to Iran that the US will from herein limit its contacts with Iranian exile and opposition groups like the Mujahedin-e-Khalq, which has hosted and paid prominent Trump backers like Rudy Giuliani and John Bolton.

In other words, for the moment both sides are standing down, even if Pompeo is barring Iranian Foreign Minister Zarif from coming to the United Nations in New York (talk about US mixed signals and lack of coherent strategy!) This explains the current standoff between Tehran and Washington--with emphasis on “current”.

Q. And Baghdad and Washington? From Israel’s standpoint, why is the future of US force deployment in Iraq now a central issue?

A. From Israel’s perspective, Iraq’s Shiite-majority government tolerated Soleimani and the numerous pro-Iranian Shiite militias he helped organize and arm. Baghdad has been complicit in enabling the Iranian hegemonic drive westward and facilitating the threat this poses along Israel’s northern borders with Syria and Lebanon. The small (5,000-plus troops) US presence in Iraq, along with that of additional western countries, is understood as a potential damper on this Iranian strategy--with or without Soleimani.

By the by, the US presence in Iraq also hampers renewed expansion of ISIS’s fanatic efforts in Iraq and Syria. ISIS is more a danger to Iraq than to Israel. This may help explain why Iraq’s demand that the US force leave the country appears half-hearted and why the Trump administration is brutally pushing back with threats of financial sanctions against Baghdad that can only provide Iraq with a rationale to back off.

One way or another, Israeli considerations do not appear to be prominent in the current US confrontation with Iraq. Here we must recall that President Trump’s 2016 campaign promise to bring US troops home from Afghanistan and Iraq is likely to be an important issue during the unfolding election year. Ironically, it emerges that getting the US out of Iraq was a mission undertaken, albeit for vastly different reasons, by both Trump and the Iranian general he just killed, Soleimani.

Q. Finally, is Iran’s final abandonment of the 2015 nuclear deal, the JCPOA, “secondary” for Israel?

A. It is in the sense that this is an outcome ostensibly desired by both President Trump, who pulled the plug on the JCPOA in 2018, and PM Netanyahu, who opposed the JCPOA from the start and encouraged Trump to abandon the deal. If indeed Iran, despite the impact of heavy economic sanctions, now moves forward with a military nuclear program, Trump and Netanyahu or their successors in office will confront the fruits of Trump’s disastrous 2018 decision, which is responsible for so much of the escalation of tensions between the US and Iran in recent months.

Here it bears recalling and emphasizing: the escalation of tensions between Israel and Iran in recent months and years can be traced to a different issue: Iran’s projection of force, under Soleimani’s leadership, westward toward Israel. The JCPOA, an achievement of the Obama administration, did nothing about this. Neither has Trump. Any further US military withdrawals from Iraq and/or Syria under Trump will only exacerbate this Iranian threat. It is important for Israel to explain to Washington why it prefers the US to remain militarily in the region.

A. As the deadline nears on January 15 for finalizing the various electoral lists, two key developments were registered on Sunday, January 12. Both work against Netanyahu’s interests.

First, Knesset Speaker Yuli Edelstein, a Likudnik, reluctantly cleared the way for a Knesset Committee to be established to discuss Netanyahu’s request for immunity from prosecution as long as he is prime minister. Edelstein bowed to both a ruling by the Knesset legal adviser and threats by the Blue-White party to remove him from office.

Assuming Avigdor Liberman and his Yisrael Beitenu party hold steadfast to their opposition to immunity, the Knesset Committee, like the Knesset itself, will now prove unable and unwilling to muster a majority in favor of immunity. By election day, March 2, there is a good chance therefore that Netanyahu will be indicted and facing trial on three counts. This can only hurt the Likud’s chances in the elections.

Second, also on Sunday January 12, two parties on the left, Labor-Gesher and Meretz-Democratic, agreed to merge their electoral lists. This appears to eliminate the danger that one or both of these left-wing parties will fall below the four-mandate threshold on March 2 and disappear along with its votes and mandates. Correspondingly, the prospects increase significantly for a Blue-White 61-member-of-Knesset blocking coalition that includes the parties of the political left, including the increasingly solid Arab Joint List, together with the secular-right Liberman.

This still does not guarantee Blue-White a governing coalition of 61. For that to happen, one of three developments will have to take place. Either Liberman will have to agree to cohabit in a genuine governing (not blocking) coalition with the Arab Joint List that he detests, or Blue-White will have to radically increase its vote count, or Likud, minus an indicted Netanyahu, will agree to join Blue-White in a broad centrist coalition.

As matters currently stand, this last option appears to be the most likely, particularly if disunity continues to prevail among the extremist parties to the right of Likud.

Q. Will there be anything truly unique about the next Knesset?

A. Yes, even if three right-wing parties unite into only two parties, the next Knesset will have fewer factions, or parties, than any previous Knesset. This, thanks to the four-mandate threshold law. It appears that, after several successive borderline performances, the smaller parties are getting the idea that they have to consolidate to survive.

Here the paradox is that the four-mandate law was sponsored several Knesset elections ago by the anti-Arab Liberman, who intended the outcome to be a reduction in Arab representation. What happened instead is that four Arab parties united in a single list (and prospered electorally) and now Labor and Meretz are uniting. In contrast, the right-religious parties are still so riven by rivalries that, in recent elections, they have been the main victims of the law.

Hopefully, fewer Knesset factions will mean a more manageable Knesset, no matter who wins, and correspondingly less likelihood of a hung-Knesset and a fourth round of elections.