Hard Questions, Tough Answers (May 29, 2018) - Iran in Syria, Hamas in Gaza: between war and compromise 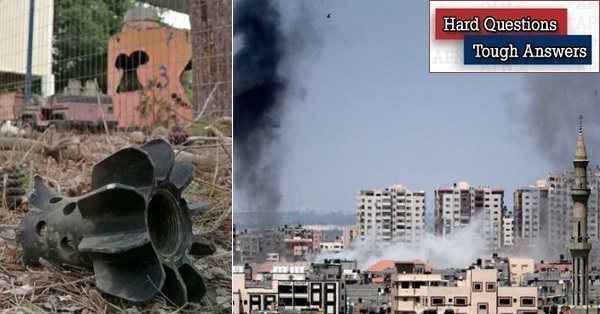 This week, Alpher discusses whether there is a chance to avert conflict in Syria and Gaza; the recent mortar fire on Israel's Gaza perimeter settlements; de-escalation on the Israel-Iran front in Syria; and Israel registering success or at least limited progress on both the Iran/Syria and Hamas/Gaza fronts.

Q. There appears to be almost simultaneous movement, both military and diplomatic, on Israel’s two “hot” fronts: Syria and Gaza. Is there a chance to avert conflict on both?

A. The Syria/Iran front could conceivably be more promising, largely because Russia is exerting its influence on both Iran and Israel. The Gaza front features more unpredictable strategic variables and more daily violence, hence conflict-mitigation seems less likely, albeit not impossible.

Q. On Tuesday, Israel’s Gaza perimeter settlements were the target of mortar fire for the first time in months. If this is the hotter front, perhaps we should start there.

A. This was ostensibly a “local” incident: Islamic Jihad firing 28 mortar rounds at Israeli communities, ostensibly in retaliation for an Israeli preemptive attack that killed three IJ operatives. Yet now that we have experienced Hamas’s capacity to completely control violence coming from Gaza--two months of carefully choreographed border demonstrations and fence attacks without a single rocket being fired--it should be clear that Tuesday’s flare-up was a signal from Hamas that escalation is an option.

Further, Hamas has announced that on the June 5 anniversary of the Six-Day War it will renew mass demonstrations at the fence on the scale we witnessed in mid-May when the US inaugurated its embassy in Jerusalem. In the interim the Palestinian Islamist Hamas continues to fly incendiary kites over Israel to burn the wheat fields of the Gaza periphery kibbutzim. So no near-term end of violence seems likely.

Yet there are also conflict-mitigation signals. A hudna (long-term ceasefire) offer by Gaza-based Hamas military leader Yahya Sinwar has provoked debate in Israel and beyond. The Trump administration is apparently discussing plans for major infrastructure investment in Gaza with Egypt and Qatar, ostensibly to be unveiled when the administration’s long-awaited Israeli-Palestinian peace plan is presented. (The latest date mooted for this long-promised event is late June, after Ramadan.)

Economic investment in Gaza is not possible without a number of preconditions: a ceasefire, close collaboration by Hamas with Gaza’s neighbors Egypt and Israel, and input from Qatar, which has both money and influence over Hamas. All parties seemingly recognize the desperate need for a major international role that could reverse the downward societal and economic slide of Gaza’s two million residents.

Then too, there are many flies in the ointment. The US, Israel and Egypt are all committed to the West Bank-based PLO rather than Hamas as their partner for dealing with Gaza. Yet the PLO’s attempts to reconcile with Hamas and restore genuine Palestinian Authority rule in Gaza, including control over the military dimension, have failed. Sinwar’s hudna offer appears to be predicated on Hamas retaining its offensive military capabilities, which Israel cannot accept. Further, Hamas will not talk directly to Israel, and still preaches its destruction.

Meanwhile, back in Ramallah a looming leadership crisis is paralyzing initiative: Palestinian leader Mahmoud Abbas (Abu Mazen) is apparently seriously ill, yet there is no agreement on a successor. Both Abbas and the PLO/PA are currently too weak to even attempt to play a serious role in a Gaza long-term ceasefire.

Q. De-escalation on the Israel-Iran front in Syria is more promising?

A. On Monday, Russian Foreign Minister Lavrov declared that only Syrian forces should deploy in southwest Syria near the Israeli and Jordanian borders and that foreign military forces should leave Syria. The first part of this statement is welcome news to both Israel and Jordan. The second, Lavrov’s call for withdrawal from Syria, appears to refer only to Turkey and the US insofar as their presence on northern and eastern Syrian soil was not solicited by the Assad regime in Damascus. In contrast Russian, Iranian, Iranian-proxy and Lebanese Hezbollah forces are all deployed in Syria by invitation of the Assad regime. Russia itself has contracted with Syria to maintain its new-old bases in the country for decades.

Both Russia and Jordan (which has diplomatic relations with Iran) are reportedly mediating between Iran and Israel regarding Israel’s demand that Iranian and Iranian-proxy forces including Hezbollah leave Syria entirely. Lavrov’s declaration constitutes at least a degree of progress by satisfying an earlier Israeli iteration of its demands regarding Iran: distancing itself from the Golan. And it reflects at least partial Russian recognition of Israel’s strategic interests in Syria.

Lavrov’s statement is also a prelude to an anticipated move by the Syrian armed forces, with Russian support, to extend their successful mopping-up efforts against anti-regime rebels to southwest Syria and the Syrian Golan. ISIS still controls a pocket of territory at the Syria-Israel-Jordan border junction and Syrian rebels still control parts of the town of Deraa on the border with Jordan, where the Syrian revolution erupted back in 2011. The Syrian armed forces are apparently also interested in renewing UN-mandated and patrolled ceasefire arrangements with Israel on the Golan, a development Israel would welcome.

Israel’s part of this emerging deal with Russia regarding Iran appears to be reluctant acquiescence in the survival of Assad’s rule in Damascus. Reluctant, because Assad’s bloodstained record of butchering Syrian civilians hardly recommends him as a desirable neighbor. This is balanced by apparent Russian acceptance that Israel will continue to attack Iranian targets in the rest of Syria, along with ordnance destined for Hezbollah in Lebanon.

Notably, all this is happening against the backdrop of the Trump administration’s recent decision to withdraw from the JCPOA, the Iran nuclear deal. Iran, Russia, China and the three European signatories of that deal, the UK, France and Germany, are currently weighing options for holding the deal together despite threatened US primary and secondary sanctions.

Then too, there is still a small US military contingent on Syrian soil, in the southeast of the country. It clashed a few months ago with Russian mercenary forces, reportedly killing hundreds. The US is also loosely committed to interdicting Iranian military passage overland from Iraq into Syria. And, based on a ceasefire agreement it was party to with Russia last year, Washington objects to Syrian plans to mop up opposition forces in southwest Syria. Accordingly, the potential for negative interaction between the JCPOA drama and Iran’s military presence in Syria remains broad and unpredictable.

Q. Still, Israel appears to be registering success or at least limited progress on both fronts: Iran/Syria and Hamas/Gaza.

A. True. But complacency or arrogance on Israel’s part would be a mistake. There remain endless possibilities for escalation on both fronts.

At the time of writing, on Tuesday, Israeli retaliation for the mortar fire from Gaza had begun and a new escalatory spiral might be emerging. Up north, Syrian military activity on the Syrian Golan could easily overflow into the Israeli Golan. And Israeli efforts to stem Iran’s buildup in both Syria and Lebanon will certainly continue. Indeed, on Sunday PM Netanyahu threatened Israeli attacks on Iranian-supplied strategic weaponry and weapons plants not only in Syria but in Lebanon as well--a potential new departure that could ignite Israel-Hezbollah fighting.

Thus far, Israel’s aggressive stance against Iran in Syria and Hamas in Gaza appears to have paid off. Deterrent messages to Iran and Hamas have been delivered effectively if not comprehensively. Israel has cautiously avoided involvement on the ground in either enemy arena. Interested parties are seeking ways to de-escalate on both fronts without negatively affecting Israel’s interests or curtailing its freedom to respond to aggression.

Still, if and as the ISIS and Iran threats are tamed, neither Egypt, Jordan nor Saudi Arabia may be quite as interested in maintaining close strategic cooperation with Israel. Those countries could then reassert pressure on Jerusalem to do something about the Palestinian issue. Yet for its part, Israel still has no strategy for either Gaza or the West Bank other than “mowing the lawn” (Gaza) and slowly drifting into apartheid (the West Bank).

Then too, another war with Hezbollah across the border in Lebanon could do devastating damage to both Israel and Lebanon. Iran remains close enough to provoke and join in.

Finally, there is the looming prospect of Abu Mazen’s departure from the scene. A new Palestinian leader who beseeches Israel to make peace at any cost and can deliver on an agreement is hardly a prospect. Rather, matters will probably be worse: anarchy, power struggles, an end to security cooperation with Israel, and a Hamas bid for power in the West Bank are all more likely possibilities.

Currently, the Israeli-Palestinian status quo appears to serve the needs of both sides. But it is not likely to last. Whether on any front--Syria, Hezbollah, Gaza or the West Bank--we move toward stabilization or escalation depends on so many actors and factors as to be unpredictable.