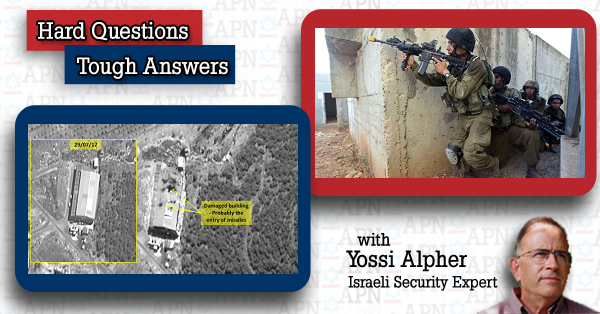 This week, Alpher discusses the Israeli Air Force's alleged attack on a Syrian missile plant deep in Syrian territory; whether this is Israel's only new security front; Israel's internal security; why the Border Patrol's theatre of action is a new security front; what Hamas is doing in Lebanon; the "front" of expanding global strategic reach; and what happened to the conventional Arab military challenge to Israel.

A. Very possibly both. The attack, which Israel has neither acknowledged nor denied, focused on an unusually sensitive target at a sensitive location-- unlike some 100 attacks against Hezbollah munitions targets in Syria recently claimed by outgoing Israel Air Force chief Amir Eshel. Israel’s aircraft, reportedly firing their missiles from Lebanese airspace, almost certainly had to negotiate or neutralize Russia’s highly sophisticated S-400 anti-aircraft installations on Syrian soil.

The attack followed publication of a UN report accusing Syria of launching chemical attacks on its soil. The chemical weapons report places the latest attack in a relatively sympathetic context. The missile plant attack, incidentally, took place ten years almost to the day after the destruction of a Syrian nuclear weapons reactor being built by North Korea. That attack too was attributed to Israel.

The alleged Israeli attack also follows a recent Netanyahu-Putin meeting that was reportedly contentious. According to some sources, Russia’s President Vladimir Putin followed up that meeting with notification to Syria’s President Bashar Assad that Israel would henceforth cease attacking targets on Syrian soil. This broaches the possibility that the attack on the Syrian missile plant constituted a kind of red flag to Putin, in effect putting the Russians on notice that Israel could choose to ignore their presence on Syrian soil and conceivably neutralize their sophisticated defenses when vital Israeli interests are at stake.

This in turn suggests possible new Israeli-Russian tensions regarding Syria and the Iranian presence there. Note that there was and is apparently no US military or diplomatic dimension to this affair. This is significant: outgoing IDF deputy chief of staff Yair Golan, an outspoken straight-shooter, just declared at a Washington DC seminar that Israel would not be able to defeat Iran without American support.

To keep Israeli-Russian matters in perspective, we are nowhere near the July 1970 confrontation between the Israeli and Soviet air forces over the Suez Canal where the IAF shot down five Soviet MiGs at the height of the Cold War. Nor has there as yet been any significant Israeli-Iranian clash on Syrian soil. Nevertheless, we are apparently looking at a new level of Israeli engagement regarding Russian- and Iranian-defended Syria. And we may be looking at a new era of parallel US disengagement in Middle East conflicts that seriously threaten Israel.

Q. Is this Israel’s only new security front?

A. The IDF just released statistics to the effect that the Border Patrol is now its most popular branch of service in terms of rates of volunteering by new recruits, outdistancing traditional attractions like the elite Paratroopers. Veterans of IDF service will be excused for raising eyebrows: the Border Patrol?

This combination army/police unit used to be at the bottom of the list. It has risen to the top because a) it no longer patrols borders but rather guards internal hotspots like the Old City of Jerusalem, and b) this is now where the “action” is. Highly publicized incidents in which female Border Patrol soldiers were killed recently at the Old City’s gates have generated a flood of female volunteers. The Border Patrol has even built a training facility replete with full-scale models of Old City hotspots like the Damascus Gate.

Q. But why is the Border Patrol’s theater of action a new security front?

A. Because as Israel continues to absorb the West Bank and East Jerusalem, thereby rendering the two-state solution increasingly tenuous, its conflict with the Palestinians becomes internal and domestic. Increasingly, soldiers dealing with Palestinians carry out policing tasks. The Border Patrol is best suited to this mission. Israeli eighteen-year olds seeking actively and personally to defend their country grasp that this is now the challenge. But this has strategic significance, too: this is a new front, one that corresponds with the slippery slope Israel and the Palestinians are sliding down toward an ugly one-state reality.

Q. What is Hamas doing in Lebanon?

A. The militant Sunni Islamist Palestinian movement finds itself almost without friends in the Sunni Arab world. Its association with ISIS activists in Sinai has lost it the allegiance of the moderate Sunni monarchies led by Saudi Arabia. Egypt views it as a subversive agent for the same reason. Hamas’s lone Sunni supporter, Qatar, has been isolated strategically by a Saudi-led boycott.

Hamas’s new leader is the militant Yahya Sinwar. His background is terrorism and many years in Israeli incarceration. Having little regional political experience, he has now turned back to Iran and Syria. Hamas was aligned with these two extremist regional actors back before the 2011 revolutions that forced it to line up with fellow Sunni Arabs.

Sinwar has lost the adherence of the Sunnis and apparently reasons he has little to lose and something to gain (by way of arms and financial support) by re-aligning with Iran. And because Iran, via Lebanese Shiite Hezbollah, effectively controls southern Lebanon up to Israel’s border, elements from Hamas are now there too.

Accordingly, for the first time since Israel’s 2000 withdrawal from southern Lebanon we confront the possibility of a renewed Israeli-Palestinian front there, with Sunni Hamas and Shiite Hezbollah deployed in tandem.

Q. And the “front” of expanding global strategic reach?

A. Prime Minister Netanyahu just departed for an unprecedented visit to Argentina, Colombia and Mexico--an historic first for a serving Israeli prime minister. He is bringing a coterie of business executives with him, particularly from the cyber and security sectors. The idea appears to be to enhance strategic ties with an eye to diplomatic, security and economic payoffs.

This Latin America visit follows recent prime ministerial trips to east and west Africa and to Central Asia. Everywhere, Netanyahu seeks to benefit from the current low profile of the Palestinian issue. He also wants to leverage the enhanced profile of Israel’s security ties with its Arab neighbors. If the Gulf Arabs can quietly buy Israeli cyber and intelligence know-how in order to combat ISIS and Iran, why shouldn’t the Latin Americans take an interest?

This is a broadly successful set of ventures that enhances Israel’s global standing. Yet the ventures have limited staying power. First, because the Palestinian issue will not go away; indeed, it could flare up at almost any time--in the West Bank (intifada, Abbas’s passing from the scene), Gaza (Hamas) and/or, as just noted, Lebanon. And second, because to date there is nothing to indicate that Netanyahu’s international “conquests” are being translated into more favorable votes for Israel in United Nations bodies. Last December’s UN Security Council condemnation of the settlements is a case in point that the globetrotting prime minister found difficult to explain.

Q. What happened to the more traditional front, the conventional Arab military challenge to Israel?

A. For the foreseeable future, it does not exist. Recall that the last major state-to-state conflict fought by Israel was in October 1973. For decades we have been confronting primarily non-state actors--in Lebanon and in the West Bank and Gaza Strip--or more distant one-off missile offensives, as in 1991 with Saddam Hussein’s Iraq.

What is new concerning “fronts” is the very flexibility we must now assign to the term. As Israel swallows up the Palestinian territories they become a “domestic” front. As Iran infiltrates the Levant, we confront a nebulous collection of potential fronts on Lebanese and Syrian territory that involve both non-state actors (Hezbollah, Iran’s Shiite proxies) and state actors like Iran and Syria.

Hovering somewhere behind or over them is a resurgent Russia, now once again a major Middle East player. Hovering further back is the United States, whose role in the Trump era remains a mystery.