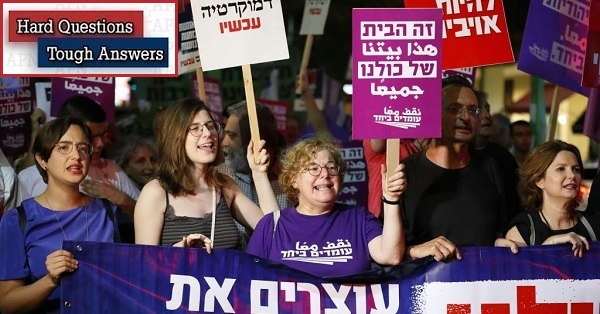 Q. Last week, the Knesset passed the Nation-State Bill, sparking a rash of criticism that Israel under Netanyahu is now officially a racist country in which Judaism outweighs democracy. What’s your take?

A. Even though this law is primarily declarative and has little “bite”, it represents two dangerous dynamics in Israeli politics and society. One dynamic, embodied in the decade-long history of the legislation involved, reflects the manner in which the peace process with the Palestinians has become corrupted by both Israeli and Palestinian ultra-nationalism. The second dynamic reflects the actual political process in Israel: center right parties like the Likud and ultra-Orthodox parties whose main focus is usually religion are becoming increasingly jingoistic as elections approach.

Q. Where did this leave us at the start of a new week?

A. By Sunday night the Israel Air Force was attacking those balloon and kite launchers the IDF determined to be adult Hamas operatives (until now it had fired only warning shots at adults). And Iron Dome rocket interceptors were being deployed in central Israel in preparation for war. On the other hand, mediation by Egypt and United Nations emissary Nicolay Mladenov had persuaded Hamas to declare a ceasefire. All this, following an escalation of rocket and mortar fire on Saturday that produced an IAF bombing response targeting some 40 Hamas installations deep inside the Strip. Saturday’s fighting exceeded any escalation since the 2014 war.

The situation Monday morning was paradoxical. A brief but heavy escalation had taken place in which there were few casualties on both sides. Then a ceasefire had been declared that no-one believed would last.

Yet the overall impression was that neither Israel nor Hamas wants another round of all-out conflict. Previous rounds, in 2008-9, 2011 and 2014, ultimately did not benefit either side. Gaza suffered heavy human and material losses. Israel had to deal with prolonged disruption of daily life and considerable international condemnation. Who needs another round?

A. To the best of my memory, the idea of a law declaring Israel the nation-state of the Jewish people was first broached by Tzipi Livni, a liberal now allied with the Labor party, when she headed Israel’s negotiating team with the PLO, Israel’s Palestinian negotiating partner, a decade or so ago. She and others were concerned over the effect on Israel’s Arab community of the prospect of a Palestinian state situated next to Israel: Arab political and intellectual leaders in Israel, influenced by Palestinian nationalism, were increasingly advocating that, following a two-state solution, Israel become a bi-national Jewish-Arab state rather than a Jewish and democratic state that offers equal rights for minorities. Livni also sought to signal the PLO that the issue of “return” of 1948 refugees could not be conceived of as a back-door means of “Palestinizing” Israel after peace.

Further, Israel was created by the United Nations in 1947 as a “Jewish state”, a term with religious connotations, and in the interest of international legitimacy this was the term incorporated in Israel’s 1948 Declaration of Independence. This terminology has contributed to a Palestinian drive to reject the term “Jewish people” and treat Israelis as religious usurpers of sacred Arab and Muslim territory. This in turn explains hard-line Palestinian negotiating demands that Israel accept the right of return and Palestinian leadership declarations that there never was a temple on the Temple Mount.

Accordingly, the initial concept of a basic law defining Israel as a nation state essentially did not go beyond the opening line and a half of the new law: “Israel is the historical national home of the Jewish people in which the state of Israel was established. The state of Israel is the nation-state of the Jewish people.” As a complement to the Declaration of Independence, there was little here to arouse opposition from any but militant Israeli Arab circles.

Q. And the ultra-nationalist and jingoistic influence on the language of the new law exercised by the current Israeli mainstream?

A. Over the past decade, the nation-state law went through many additions, amendments and permutations as Israel itself became more ultra-nationalist. Mindless and extreme members of Knesset saw the emerging law as a vehicle for their ideological fantasies. The law that passed last week talks about the Jewish people’s “religious. . . right for self-determination”. It asserts that “The actualization of the right of national self-determination in the state of Israel is unique to the Jewish people”. Israel views “Jewish settlement” as a national value. Jerusalem is not just the capital of Israel but the “unified and complete” capital. The law goes so far as to determine that “The state will act to preserve the cultural, historical and religious legacy of the Jewish people among the Jewish Diaspora.” The words “democratic” and “equality” are never mentioned in the law.

Here and there, the extremist drafters got cold feet. After demoting Arabic from “official language” alongside Hebrew to “special status”, they added that “This clause does not change the status given to the Arabic language before the basic law was created”. A clause allowing for exclusively Jewish communities was removed after President Rivlin protested. Earlier, a clause prioritizing the Jewish over the democratic components of legislation was excised under widespread protest.

Q. What, in reality, will this law change?

A. On one level, this law is declarative and not operative. Clauses about Jerusalem, Hebrew, national holidays and even settlements were borrowed from earlier basic laws to decorate this one.

But even at the declarative level the law is an affront to many in Israel and beyond. Israeli Druze, whose men serve in the IDF in greater proportional numbers than Jewish males, are appealing to the High Court of Justice over the law’s provision that they play no role in “national self-determination”. Israel’s Arabic speakers, some 20 percent of the population, are angry over the law’s demotion, even if in theory, of the Arabic language. The many secular and liberal Israelis who have no problem with the country being defined as the nation-state of the Jewish people resent the addition of the “religious right to self determination” (we recall that Zionism began as a revolt against the Jewish religious establishment). Diaspora Jews have every right to take affront over Israel’s presumption of guardianship over their values.

Then too, surprise surprise, this law was passed on the day PM Netanyahu was hosting a visit by his ultra-nationalist role model from Central Europe, PM Orban of Hungary. It was passed during a week in which the Knesset passed three additional prejudicial laws: a measure transferring West Bank Palestinian appeals against Israeli land grabs from the High Court to a lower court that is more sympathetic to the settlers, a law banning “Breaking the Silence” (a watchdog group of ex-soldiers reporting on human rights violations in the West Bank) from Israeli high schools, and a law regarding surrogacy rights that discriminates against LGBT men because the prime minister caved to protests from the ultra-Orthodox.

Yes, some of the reactions inside Israel and beyond are exaggerated. Still, no one should be surprised that this law is widely understood as prejudicial and racist. Even the opening passage of the new law that survived the original basic law proposal could have been considered “covered” by the passages in the Declaration of Independence stipulating that “The Land of Israel was the birthplace of the Jewish people” and invoking “the natural right of the Jewish people to be masters of their own fate . . . in their own sovereign State”.

Israel cannot really begin to define itself until it has recognized borders and peaceful co-existence with the Palestinians who claim the same land. Even then this will be a divisive task. And even in its final, watered-down form, this law hurts far more than it helps.

Basic laws are supposed to reflect a broad consensus. This one was approved by 62 members of Knesset, one more than the minimum required. Go back and reread the Declaration of Independence: it is a magnificent document that says all that needs to be said.

Q. Also last week, the Trump-Putin summit produced a press conference widely cited as moving Trump further into the ultra-nationalist pro-authoritarian camp. What was in it for Israel and the Middle East?

A. First and foremost, and notwithstanding declarations made in Helsinki that PM Netanyahu had reason to praise, Israel should be as concerned as most people in the US and Europe over Trump’s expression of doubt in his own intelligence establishment and his approval of Putin’s denial of election interference. Israel works closely with that intelligence establishment. Israel also holds democratic elections the Russians might wish to manipulate. Most important of all, in the long run Israel needs to rely on an administration in Washington that is not built on lies and fabrications, even if for the moment both Trump and Putin support Israel’s security needs.

Still, at the regional Middle East level Israel seemingly heard positive statements from Helsinki. Putin wants Assad to be in “full compliance” with the 1974 Israel-Syria Separation of Forces Agreement that kept the peace on the Golan Heights prior to 2011. Trump stated that “We both spoke with Netanyahu. . . . Creating safety for Israel is something that both President Putin and I would like to see very much. . . . President Putin also is helping Israel.” By insisting that the US would “not allow Iran to benefit from our successful campaign against ISIS”, Trump seemed to suggest that for the time being he will maintain the small American military contingent in Syria--an Israeli interest, if only for its symbolic tripwire presence. Putin and Trump apparently did agree in Helsinki to facilitate refugee return to Syria, a process that has picked up steam since the summit.

In Helsinki, the two leaders indicated that they disagreed over the Iran nuclear issue. For Putin, constraining Iran’s nuclear ambitions (Iran is within missile-striking distance from southern Russia) is more important than Trump’s obsession with the Tehran regime. Still, the fact that Israel carried out air attacks against Iranian bases and interests in Syria without Russian interference the day before the Helsinki summit and again on Saturday indicates that Putin continues to tolerate the attacks even as he apparently is not ready or able to push Iran entirely out of the country as Israel demands. Note that at on a different but recent occasion Putin stated that “in the Golan Heights” Russia was “taking into account the interests of Israel. We earlier talked about it with our Iranian partners”. Putin’s terminology refers to Israeli interests but Iranian partners: not the same thing.

Finally, Netanyahu should take note that, regarding the Golan Heights, Putin mentioned not only restoring the 1974 ceasefire but also implementing UN Security Council Resolution 338 of October 1973, which reaffirms UNSCR 242’s “territories for peace” demand that applies to the Golan. Note that Trump did not react to this press conference demand. At a time when Netanyahu is sending emissaries to Washington to lobby the administration and Congress to recognize Israel’s December 1981 annexation of the Golan, Putin has staked out his support for the territorial demands that a revitalized Assad regime will undoubtedly soon reiterate.

That Assad’s hands are drenched with the blood of half a million dead Syrian civilians and that half the Syrian population fled their homes on his watch does not interest Putin, whose military helped Assad carry out these atrocities. This is Assad who called the White Helmets, the indigenous Syrian humanitarian rescue force that Israel helped evacuate over the weekend, “terrorists”. These are Israel’s neighbors now. As for Trump, judging by the “music” of the Helsinki summit press conference, his interest in Syria is extremely limited at best.