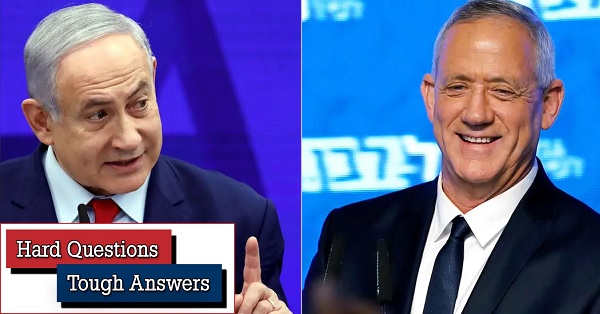 Q. As we end 2019, you are putting security before politics?

A. True, that may sound counter-intuitive. After all, as we approach a third consecutive election, politics is foremost in the minds of most Israelis. But precisely because of Israel’s political stalemate, a recent strategic assessment by IDF Chief of Staff Aviv Kochavi rings courageous, controversial, and very important.

It is rare for the head of Israel’s army to direct remarks to civilians in such a blunt manner. This in itself is apparently a reflection of the security establishment’s concern that political stalemate could be bad for the country’s security stance.

Q. What exactly did Kochavi say that raised eyebrows?

A. Before the provocative statements, note that Kochavi has a clear agenda--first for the army, then for the public. In one previous public speech, he focused on the IDF commander in the field as the only figure authorized to manage military units--not rabbis or other interested parties. In another, he presented his concept of military values, including truth and accuracy (a rare commodity these days) in military reporting.

On December 25, Kochavi presented his threat assessment for Israel and ways to deal with the threats. From the standpoint of the general public, several highly significant points stood out. First, the main threat is missiles from the north, from Iran and Iran-backed militias. Second (spoken looking right into the TV cameras), “Know that this is the reality: the warheads and range of those missiles has grown. In the next war, enemy firepower against the [Israeli] civilian rear will be great. They plan to fire their missiles on built-up [civilian] areas. We have to realize this and prepare, both through local government and at the level of public consciousness. . . . This will not be a war without casualties and I don’t promise a short war. We’ll need national resilience.

“In the next war we will attack the enemy’s urban spaces. We’ll warn the population first. Immediately thereafter we’ll attack energy infrastructure, electricity and roads of the country that hosts and encourages the terrorists within.”

Kochavi was referring not only to Syria and Lebanon. “Advanced weaponry is being transferred freely to Iraq. That cannot be ignored”. And of course, behind all this is Iran, which is escalating its threats and producing missiles that can reach Israel. Iran, according to Kochavi, has “changed its policy. In the past year it has become more active and aggressive. This policy is directed first and foremost against the Gulf states.” And here, in an indirect but clear critical reference to the US, he added, “There is no response, no counter-action, and no deterrence against these Iranian activities.”

The thrust of Kochavi’s remarks was that war with Iran and its allies and proxies to Israel’s north is likely in the near future and that the passive American stance is encouraging Iranian aggression. Israel will be alone in a long and bloody battle in which the IDF needs support, awareness and active participation from the Israeli civilian rear, which has for the most part been immune to attack for many long years. The public must shake off its complacency and prepare for serious casualties.

One distressing aspect of Kochavi’s assessment is that, given Iran’s size and distance from Israel, it is impossible to point to a war aim of decisive victory. At most, the confrontation Kochavi describes (accurately, in my view) can inflict extensive damage to Iran and its assets and deliver a reasonable period of deterrence, but at the cost of massive missile damage to Israel’s cities. Unless, of course, Iran’s regime changes radically. But that is not something Israel can deliver or even hope for in the near future.

It is rare to hear an Israeli military leader openly acknowledge the need to attack enemy civilian targets. Even more controversial is what Kochavi said about the seeming inevitability of war with Iran. Some analysts think a war can be prevented by, for example, Israel moving toward a two-state solution with the Palestinians and making fewer blustery threats against Iran and Hezbollah, and by the US returning to the Iran nuclear agreement.

There is food for thought here. Worth a try. Nothing Kochavi said negates these options. But one way or another, Kochavi delivered a message that should not be ignored. It should be high on the agenda of Israel’s impending elections, but probably will not be.

A. Listening to Kochavi and additional Israeli security figures, it is clear that the IDF wants to sharpen its focus on an impending clash to Israel’s north by deescalating to the greatest extent possible on the Gaza front. The IDF does not want a two-front war. Kochavi believes Israel has a unique opportunity to achieve this be reaching and expanding understandings (“hasdara” in IDF parlance) with Hamas in Gaza. He appears to have persuaded skeptics like previously blowhard and belligerent Defense Minister Naftali Bennet as well as PM Netanyahu himself. At a minimum, the politicians are on board during the months ahead, in which elections and yet another attempt at forming a coalition will preoccupy them.

Q. What’s encompassed in this Israeli-Gazan enterprise, which is by far not the first attempt at hasdara? And what is not included?

A. Encompassed are more Qatari money and more infrastructure projects for the Strip. A serious attempt is being undertaken to enable more Gazans--merchants as well as laborers--to access Israel on a daily basis. In return, Hamas is expected to cease attacking Israel. Hamas has already responded by cancelling the Friday demonstrations on the Gazan side of the fence and the incendiary balloon launchings that in the course of the past year have proven so disruptive.

On the other hand, Israel is not extending Gaza’s permitted fishing zone deeper into the Mediterranean. Hamas remains free to build up its military force and even to hatch terrorist plots in the West Bank. In the foreseeable future there will be no exchange of prisoners and the remains of two IDF soldiers will continue to be held by Hamas--an incendiary issue in Israel. Nor is Hamas’s capacity to deliver a ceasefire by Palestinian Islamic Jihad, which is more directly under Iran’s control, a certainty. Last month’s IDF assassination of a particularly belligerent renegade PIJ commander in Gaza was intended as a deterrent message in this regard.

In other words, this looks like, at best, a short-term arrangement that will only be maintained if both the IDF and Hamas exercise restraint and if Egypt can be relied on to offer emergency mediation when needed. Talk of a five-year agreement appears extremely optimistic. Rather, the idea is to maintain quiet on the southern front in anticipation of war on the northern front in the not too-distant future.

Here it emerges that Israel is encouraging the flow of cash to Gaza-based Hamas with its terrorist and anti-Semitic credo while continuing to withhold funds from the West Bank-based Palestinian Authority in response to the salaries and pensions it pays jailed Palestinian terrorists and their families. This is only one of the paradoxes generated by this hasdara. After all, Hamas and PIJ are not candidates for long-term coexistence with Israel while the PA, which cooperates with Israel on security matters, is. But of course, Netanyahu and the dominant right-religious mainstream in Israel are not interested in anything resembling a two-state solution anyway.


Q. On to politics: can we begin to see how March 2’s third round of elections is shaping up?

A. Definitely. Last week Netanyahu won the Likud primary handily against challenger Gideon Saar. He registered a resounding 72 percent majority. Saar’s last-minute offer to guarantee election to Israel’s ceremonial presidency of the indicted Netanyahu flopped as a vote-getter among Likudniks. Netanyahu even got near 90 percent majorities from Likudniks in the Gaza periphery settlements that he has proved incapable of protecting from Hamas attack for the past ten years. Go figure!

Netanyahu is almost certain any day now to request immunity from prosecution from the Knesset. This cannot be voted on until after elections, and cannot be approved unless Netanyahu finally achieves majority Knesset support in those elections after failing twice. But the move does offer a clear statement of Netanyahu’s objective: electoral victory and avoidance of prosecution or jail for the crimes he is accused of.

At this early juncture, the polls indicate that he still cannot succeed. According to the latest channel 12 poll, even one-third of right-wingers oppose immunity. Neither the Likud-led right-religious bloc nor the Blue-White center-left bloc has a majority without Avigdor Liberman’s eight mandates. Meanwhile, Netanyahu is busy appointing new ministers--many of them controversial back-benchers, some under police investigations but all of whose support he needs.

A. As in the two previous rounds, interest focuses on the smaller parties on the left and right. Will Meretz (currently polling at four mandates, barely above the threshold to enter the next Knesset) and Labor-Gesher (five) merge to save the left from possible electoral oblivion? Will the New Right (five) merge with the prospective Union of Right-Wing Parties (four mandates) that features a coalition between current Minister of Education “Rav Rafi” Peretz and a blatantly Kahanist faction, Jewish Power? Or will they too again risk loss of mandates due to internal political rivalries?

A. Not yet. What remains fascinating is the absolute contrast between Likud’s Netanyahu and Blue-White’s Gantz. Netanyahu, fresh from his primaries victory, is on the offensive, throwing out smoke screens of baseless promises that are quickly forgotten and encouraging his son and a team of digital propagandists to fire in every direction. Gantz, who enters these elections now in firm control of his party, with his fellow generals and Yesh Atid’s Lapid willingly stepping back, projects the image of self-assured elder statesman. No incendiary rhetoric.

A debate between them would be fascinating. But that’s not Bibi’s style.