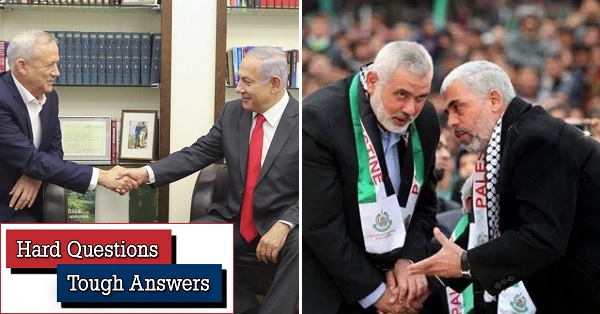 Q. Israel assassinated a Palestinian Islamic Jihad leader in Gaza last week, then fought a brief three-day battle with PIJ in Gaza. Meanwhile, the clock kept ticking on the deadline for forming a new coalition in Israel. What’s the connection?

A. More than one connection, actually. First, any military initiative by Israel at a sensitive time in domestic politics is tricky and risky. Second, Prime Minister Binyamin Netanyahu used the occasion to bring Naftali Bennet, a frequent critic of Netanyahu’s Gaza strategy, into the government as minister of defense.

Third, the fight against a Palestinian enemy put wind in the sails of Netanyahu’s effort to delegitimize and discredit efforts by Blue-White’s Benny Gantz to establish a minority coalition with tacit backing from members of Knesset who are Palestinian Arab citizens of Israel.

Finally, Israel assassinated Baha Abu al-Ata, a troublesome PIJ brigade commander who for years consistently attacked Israel when prohibited from doing so by Hamas, Gaza’s primary Islamist movement. Abu al-Ata was out of control: he was responsible for 99 percent of recent years’ spontaneous rocket attacks from Gaza on Israel. He had consistently disrupted life in Israel’s Gaza periphery towns and villages. He had also disrupted Israel-Hamas efforts to find, with Egyptian assistance, a political-economic-military modus vivendi for Gaza.

When PIJ retaliated for the assassination, the IDF confined its response to attacking PIJ targets, not Hamas, while the latter did not join the fighting. In the past, Israel would have blamed Hamas as the “sovereign” power in the Gaza Strip for any attack launched from there and Hamas would have responded militarily. This latest departure has implications for Israel’s relations with the Palestinians, a controversial issue in Israeli politics.

Q. Start with the complications caused by domestic politics.

A. The assassination of Abu al-Ata had been contemplated for years and planned for months. Both Netanyahu and the heads of the IDF (Chief of Staff Aviv Kochavi) and the Shabak or General Security Service (Nadav Argaman) were sensitive to the inevitable charge that the timing of the assassination was political and intended to boost Netanyahu’s chances of heading the next coalition.

This explains why in September, when PIJ rockets were fired at Ashdod to disrupt a Likud election rally and embarrass Netanyahu while he was speaking there, the security chiefs rejected the angry prime minister’s demand to attack PIJ immediately. They insisted on security cabinet approval first.

Then, around ten days before the assassination, the security chiefs announced they were ready from the Intelligence and operational standpoints. This may explain Netanyahu’s decision to bring his right-wing nemesis Naftali Bennet into the Defense Ministry the morning of Israel’s dawn attack on a sleeping Abu al-Atta. Bennet has long advocated a tougher military approach toward Gaza. This certainly explains why potential rocket targets as distant from Gaza as Tel Aviv were locked down--schools and businesses were closed and people were told to stay close to shelter. If things went wrong and Israeli civilians were killed in the Gazan response, Netanyahu could at least partially blame Bennet.

At any rate, the cautious Netanyahu had to be aware that the PIJ attack could benefit him politically but could also, if gone awry, seriously jeopardize him politically. By the same token, a simultaneous dawn attack in Damascus was intended to assassinate an even higher ranking PIJ official than Abu al-Ata, Akram Ajuri, presumably by a missile launched from an aircraft. The attack killed only the official’s son and a bodyguard in their sleep. Had it gone awry or escalated or been clearly attributable to Israel (which did not take credit for it), Netanyahu could have been blamed at a sensitive time politically for uncontrolled escalation on Israel’s northern as well as southern borders.

While all this was transpiring, Netanyahu went out of his way, in the Knesset and on social media, to insinuate that Knesset members from the 13-MK strong Joint Arab List constitute a Palestinian “fifth column”. Because of their sympathy for fellow Palestinians in Gaza and elsewhere, the Arab MKs’ potential tacit support for a Gantz-led minority government would, according to Netanyahu’s rhetoric, render that government anti-Zionist and pro-Palestinian. Rather than recognize that the readiness of at least some Arab MKs to enter a Knesset alliance with a governing coalition is a step forward for Israeli democracy and inclusiveness, Netanyahu opted for narrow political reasons to preach domestic discord and exacerbate Jewish-Arab tensions.

Here Netanyahu was leveraging the fighting in Gaza to weaken Blue-White’s chances of going it alone in an alliance with Labor, the Democratic Union (Meretz, Ehud Barak, and others) and Avigdor Liberman’s Yisrael Beitenu--a minority government that relies for political survival on the Arab MKs. He called such an undertaking an “unprecedented emergency” for Israel and virtually accused the Arab MKs of treason. By doing so he hoped to improve his chances of leading a new unity government with Blue-White, one that guarantees him at least temporary immunity from prosecution for corruption.

Q. How does the Gaza outcome, whereby Hamas stood aside during the fighting, reflect on Israeli politics.

A. It reflects on Palestinian politics, too. Netanyahu has for a decade consistently sought to deal separately with the two territorial-political components of the Palestinian Authority. Broadly speaking, he has avoided agreeing on terms for negotiating with the PLO/Fateh in the West Bank, while seeking to weaken Hamas in Gaza and bring it, with Egyptian and United Nations mediation, to a point where it agrees to coexist with Israel militarily in exchange for economic and infrastructure aid.

Netanyahu has been aided in this endeavor by seemingly perpetual Fateh-Hamas enmity, ever since Hamas took over the Gaza Strip by force in 2007. To the extent Israeli efforts, military or otherwise, can “tame” Hamas and stabilize the situation in Gaza, PLO/Fateh in the West Bank is correspondingly weakened and the Israeli right wing’s settlement expansion plans there can prosper. Lest we forget, the Oslo Accords obligate Israel to negotiate with the PLO, not Hamas (which in any case refuses direct contact with Israel), on Palestinian issues. Of course, the Trump administration’s “economic peace” plans for the Palestinians have helped too by radically reducing the prospects for any sort of viable internationally-shepherded peace process.

Hamas, as noted, stood aside last week and allowed Israel to batter Hamas’s local nemesis, PIJ. Egyptian Military Intelligence played a key role in relaying reassuring messages between Israel and Hamas to the effect they would not attack one another. This could be a foundation stone for future Israel-Hamas understandings that contribute to stability in Gaza--but that correspondingly weaken the prospects for a two-state deal with PLO/Fateh in the West Bank, thereby bringing Israel and the West Bank Palestinians ever closer to a one-state reality.

The Israeli political connection lies in the fact that Gantz and the center and left members of his potential coalition sense deep-felt alarm at this one-state prospect, while Netanyahu and the right seemingly acquiesce increasingly in an apartheid reality. Besides, in view of Hamas’s nature as a virulently anti-Semitic Islamist organization dedicated to Israel’s ultimate disappearance, any “stabilization” agreements with it are written in sand.

A. Gantz has until this Wednesday at midnight to form a coalition. At the time of writing on Monday, his chances of success appeared poor. One major difference regarding coalition-forming between the coming days and the 21-day “free for all” period that follows is that, currently, it is possible to form a minority government based on a Knesset plurality (with the majority supplied, when needed and as agreed, by all or most of the 13 Arab MKs who are not officially in the coalition). From Thursday and for three weeks, an absolute majority of 61 will be needed to form a government.

On the other hand, sometime during those three weeks, Attorney General Avichai Mandelblit is expected finally to deliver at least one indictment against Netanyahu, thereby possibly rendering the Likud more ready to compromise. Note, too, that the Israeli political system has until now never needed the 21-day “free-for-all” parliamentary option for forming a government: conceivably, surprising new dynamics may develop.

Assuming during this next stage that the Arab MKs don’t join a coalition (they do not wish to and Blue-White is not offering them portfolios), the only remaining possibility will be either a right-wing coalition joined by Liberman’s eight-mandate-strong Yisrael Beitenu or a Likud-Blue White coalition, with or without Liberman or perhaps Labor-Gesher. Or new elections.

A. Israel demonstrated a capacity for impressive pin-point “needle-in-a-haystack” attacks. Its defenses--Iron Dome and a cooperative public--ensured that no Israelis were killed. It enhanced its deterrent profile toward its rocket-firing enemies on all fronts.

This latest Gaza operation, labeled “Black Belt” by the IDF, was good for Israeli-Egyptian strategic cooperation. The weakening of PIJ, in Gaza and in Damascus, was a setback, however minor, for PIJ patron Iran.

Whether the targeted assassination of Abu al-Ata was a good idea is a different question. There are precedents from the past (e.g., the targeted killings of PIJ leader Fathi Shikaki in Malta in 1995 and of Hamas leader Sheikh Yassin Gaza in 2004) whereby decapitating an Islamist enemy bought a few months of peace and quiet. But no more than a few months; and besides, the successor to the assassinated leader can be worse from Israel’s standpoint and can launch a retaliatory new wave of terror against Israeli and possibly Jewish targets. After all, the PIJ and Hamas are still with us.

A. Abu al-Ata was a legitimate target. He was a loose cannon on a ship steered primarily by Gazan Hamas. Few Palestinians, Hamas included, mourn his loss. His assassination and Israel’s pinpoint targeting of PIJ targets are technical feats--marred, inevitably, by the IDF’s mistaken killing of a family of eight civilians in the final hours of the operation (this produced a renegade Hamas rocket response targeting Beersheva before this round truly ended).

All told, this is almost certainly a tactical and temporary rather than a strategic achievement. Still, if Operation Black Belt generates a stable truce with Hamas in Gaza, this will be welcomed by hundreds of thousands of Israelis who are within range of rockets launched from the Strip.

But this is convenient not just for Israeli civilians who deserve peace and quiet. Netanyahu and Israel’s right-religious mainstream are content to negotiate with Hamas indirectly regarding non-peace issues: economic investment, infrastructure-building. Hamas, for its part, refuses for Islamist reasons to recognize or talk directly to Israel. It will continue to arm itself and preach the destruction of Israel. In other words, absent stronger foundations, a truce with Hamas will almost certainly not remain stable for long.

Meanwhile, Hamas and PIJ will continue building up their military arsenals. In parallel, Israel will continue to hold back from committing to inflicting a decisive defeat on the Islamists in Gaza for fear of the consequences of such a major military operation: the hundreds of Israelis killed and wounded, the international condemnation of the thousands of Palestinian casualties, and the unanswered question what to do with Gaza after pacifying it.

That is one reason the current ceasefire with Gaza is merely tactical. The other is that it moves us further away rather than closer to a solution to the Palestinian issue. Accordingly, it leaves us continuing to slip-slide down a slippery slope toward one-state apartheid status and Israel’s demise as a Zionist, democratic country.

If for no other reason--and regardless of how cynical one might be about the near-term prospect of a two-state deal with the PLO--that is why Israel desperately needs a new, less nationalist and more rational government.