Hard Questions, Tough Answers (May 14, 2019) - Approaching a moment of truth for Israel-Palestine 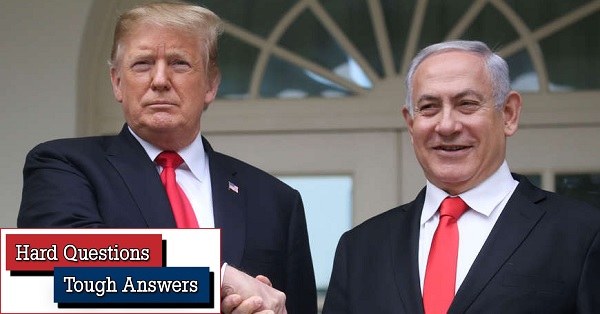 Q. We’re nearing the climax of two key dynamics regarding Israel and the Palestinians: formation of a new ultra-nationalist Netanyahu government, and presentation by Jared Kushner of the Trump ‘deal of the century’. Care to offer any insights? Make any predictions?

A. First and foremost, the two issues are connected. Netanyahu’s fellow Likudniks and future right-religious coalition partners know he is desperate to evade criminal charges and a trial. To do this through immunity-delivering legislation, which could require an absolute majority of 61 Knesset votes, Netanyahu needs his party’s and his partners’ unanimous support. Accordingly, he is ready to entertain their most extreme demands, whether for ministries that will advance Israel toward fascism and away from pluralist democracy, or for annexing West Bank territories. Meanwhile, for Netanyahu and his lawyers every dirty trick and every evasive measure appear to be kosher in beating back judicial pressures and mangling Israel’s rule of law.

Concerning the West Bank, Netanyahu’s own personal views and legendary caution become irrelevant; he wants to survive politically. That he is operating in a world increasingly dominated by US President Trump and fellow populist ultra-nationalists (the Hungarian version, Viktor Orban, is visiting Washington this week), just makes it easier for Netanyahu to accommodate the demands of his fellow right-wingers. Somewhere in the back of his mind--he is, after all, an experienced politician, capable of thinking strategically regarding the long term--he may know better. But first he has to stay out of prison.

This is a case wherein cynicism totally trumps integrity. The results could be awful.

Netanyahu has about two weeks to complete formation of his new coalition. As always, his task will come down to the wire. He is bargaining with his coalition partners from the right and religious right over the nuances of potential legislation on religion-and-state and judicial-immunity issues, pressures to award them choice portfolios like the justice and education ministries at the expense of Likud politicians, and the demands for annexation.

Ultimately, when there is no more time for horse-trading, everyone will bend a little and Netanyahu will have his majority coalition. At that point, as Jared Kushner has assured us, the US will unveil the ‘deal of the century’.

What is only slightly less certain is, within additional days or weeks, rejection of the Kushner proposal by Palestinian leader Mahmoud Abbas (Abu Mazen). Abbas will cite what for him and for most Palestinians are the proposal’s unacceptable drawbacks: it awards Israel too much territory and recognizes its West Bank settlements; it doesn’t award Palestine half of Jerusalem; it does not honor the Palestinian demand for the ‘right of return’ of 1948 refugees; etc., etc.

Assuming these suppositions are correct, and recalling Netanyahu’s recent election pledge to annex to Israel parts of the West Bank, we can anticipate within the next half-year a move by Netanyahu’s coalition to “apply Israeli law” to one or more portions of the West Bank where the majority of residents are Israeli Jews. These could comprise the Etzion Bloc, other settlement blocs, the Jordan Valley, and additional parts of Area C (some 60% of the West Bank) that have few inhabitants, like the Judean Desert. Conceivably, quasi-annexation measures will extend to every West Bank outpost and settlement--even those (and they are many) that are not in settlement blocs and are enclaves surrounded by Palestinians.

Netanyahu’s declared rationale will be that Trump’s plan awards these areas to Israel in any case and that, with anticipated American backing and in view of PLO rejection, there is no longer any reason to wait. The formula of “applying Israeli law” will be invoked rather than “applying sovereignty” or “annexing” because that is what Israel did in 1981 regarding the Golan Heights, whose Israeli status Trump just officially recognized.

Q. If this scenario or something similar emerges, how will the Arab world react?

A. Abbas’s anticipated refusal to negotiate on the basis of the Trump plan will be supported, albeit with relatively reduced enthusiasm and involvement, by most Arab countries. They will respond with condemnation, but for the most part with little inclination to turn these Israeli acts of annexation into a casus belli.

After all--and conveniently--the Arab/US confrontation with Iran is heating up. The Arabs know that Trump is an unpredictable ally who, while provoking Iran, actually shies away from involving the US military in a fight in the Middle East. That leaves Israel, whose hostility toward the Islamist regime in Iran is crystal clear and whose readiness to deploy the IDF against Iranian aggression is unquestionable. Accordingly, this is not the time for an Arab confrontation with Israel in defense of the obstinate, ungrateful and fragmented Palestinians.

The principal exception is likely to be Jordan. The Hashemite Kingdom is already in bad shape financially and King Abdullah II is challenged by an increasingly demanding Islamist movement. One indication of the depths of his dilemma is the frequency with which Cabinet ministers have been replaced lately in Amman. Abdullah is dependent on Saudi and UAE financial largesse.

If the Trump/Kushner plan, as anticipated, tries to award the Saudis a portion of Jordan’s Islamic responsibility for the Temple Mount in return for its financial and political support for the administration’s peace proposal, Abdullah will be furious. And if this ‘deal of the century’ catalyzes Israeli annexation initiatives and consequently generates the kind of unrest on the West Bank that is liable to cause Palestinians to seek to move eastward to Jordan, Abdullah will legitimately fear unrest at home, where around 50 percent of the population is in any case Palestinian.

This could endanger the stability of the Hashemite Kingdom. And that could be disastrous. Jordan is Israel’s “strategic depth” looking eastward toward Iraq and especially Iran. In recent years, as Israel’s (mostly clandestine) strategic relations with Saudi Arabia and the UAE have improved, Netanyahu has apparently felt comfortable neglecting the relationship with Jordan in favor of neighbors further east.

This is a major strategic mistake: Jordan has proven to be a reliable shield against Iranian, Islamist and extremist-Palestinian threats from the east and a vital partner in ensuring that a future Palestinian entity of any sort on the West Bank is friendly and demilitarized. In contrast, the Saudis have proven themselves to be paper tigers militarily and are ruled recklessly by a capricious and vicious crown prince. Unless Netanyahu defies his own coalition and exercises caution, the Jordanian dimension is one aspect of the Trump/Kushner plan that could prove disastrous.

Q. Will this also be the fateful step that turns Israel into an apartheid state?

A. Assuming Israel annexes only West Bank lands where the Palestinian Arab population is sparse, it could award those Arab residents full citizenship rights or Jerusalem-style Israeli residency rights precisely in order to rebuff such accusations. Yet the end result would look like a form of apartheid in any case. After all, the remaining Palestinian-populated 40% of the West Bank (areas A and B), a tiny disjointed region with no viable land-link to Jordan and no territorial reserves, is unsustainable as a state. Hence, in the “best” case it will continue to maintain a form of autonomy that will increasingly approximate a jumble of Bantustans.

Q. Let’s turn briefly to Gaza, which you dealt with last week. Does the likelihood of Avigdor Liberman returning to the Ministry of Defense in the emerging coalition change anything in your scenarios?

A. Last week we noted that the most likely scenario for the Gaza Strip is more of the same “choreographed” dynamic of intermittent truces punctuated by relatively low-level rounds of conflict. We relegated the scenario of a major Israeli attempt to destroy Hamas or batter it into total submission to low likelihood, if only because Netanyahu prefers Hamas rule in Gaza as a means of splitting the Palestinian polity and reducing pressures on Israel to reach a two-state solution.

But suppose the spillover from a failed ‘deal of the century’ followed by unilateral Israeli annexation reduces the likelihood of a negotiated solution with the West Bank-based PLO to zero. Indeed, such a scenario could well provoke major unrest and Palestinian Authority regime-change on the West Bank itself, probably with Hamas involvement. And suppose, meanwhile, that armed provocations from Gaza continue or even escalate despite gestures by Israel. Liberman is known to favor an IDF land invasion of the Gaza Strip. New IDF Chief of Staff Aviv Kochavi wants a more aggressive approach to Hamas than that favored by his predecessor, Gadi Eizenkot.

Under this scenario, Netanyahu may no longer fear that Israel’s actions will somehow generate a united Palestinian front that Israel will be forced by global pressure to negotiate with. Accordingly, he may relent and agree, as early as this summer, to a major IDF ground-based initiative designed to beat Hamas into submission. As always, Hamas or some other Gaza-based extremist group will provide the casus belli.

And as always, the problem here will be that it is easy to start a war but difficult to end it favorably, quickly, with minimal Israeli losses, without damage to Israel’s regional relations with Egypt and other Arab states, and without dragging into the fray friends of Hamas like Iran and Hezbollah.

Liberman has no real military experience, appears to be trigger-happy, and wants to make his mark. Kochavi has yet to prove that he has the strategic intelligence of Eizenkot who, following the legendary Chinese strategist Sun Tzu (who lived around 500 BCE), believed that the best way to win a war is not to have to fight it. Netanyahu and his coalition are sensitive to pressure from about a million Israelis living near Gaza who are under constant threat of Hamas missile and mortar attack. If Trump’s peace plan eliminates the prospect of peace with the West Bank, and if the Egyptians are as fed up with Hamas as is Israel, anything might be possible in Gaza once the new Netanyahu government is in place and the ‘deal of the century’ has, as anticipated, died a quick death.

A. On the seventy-first celebration of its independence, Israel encounters the sad history of biblical and Hasmonean independent Hebrew states in the Holy Land: they never lasted much beyond 80 years. Netanyahu seems to think that, under his stewardship, today’s Israel will easily defy that historical curse. He may be handling the economy skillfully and may be dealing deftly with Iran, with Islamists like Hezbollah and Hamas and with Israel’s new neighbor Russia.

But when it comes to the Palestinian issue, and particularly the West Bank, Netanyahu, with a hand from Trump, seems determined to turn Israel into an ultra-nationalist, ultra-religious, undemocratic binational state with an unstable eastern neighbor--even before it turns 80.