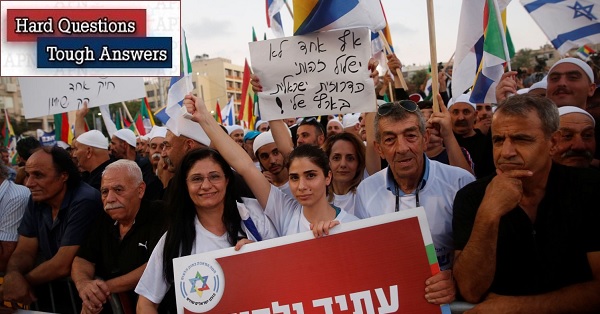 Q. The Knesset is in recess and many Israelis are on vacation. The only heavy issues on the national agenda right now appear to be the fallout from the nation state basic law and the waning efforts to bring about a long-term ceasefire with Hamas in Gaza. Is there a connection?

A. There is both a short-term connection and a very important long-term link that will be addressed toward the conclusion of this Q & A.

The obvious short-term connection is the prospect of Knesset elections early in 2019. It is increasingly clear that one of the objectives of Netanyahu’s coalition in passing the nation state basic law on July 19 (see Q & A of two weeks ago) was to feed red meat to the prime minister’s electoral base, which is ultra-nationalist and increasingly messianic and racist.

The nation state law determines that the Jewish people alone will shape the character of the state and relegates Israel’s minorities, together with the Arabic language, to secondary status. It mentions neither democracy nor equality. Netanyahu’s supporters approve. Indeed, with elections on the horizon, Netanyahu assesses that his main rivals in recruiting votes are political parties to his right rather than on the dwindling Israeli political center and left. The nation-state law helps him co-opt his own right wing by being at least as ultra-nationalist.

The short-term link between elections and the Gaza ceasefire efforts is more nuanced. Another war with Hamas in Gaza, a war the outcome of which is impossible to predict, could hurt the electoral chances of the ruling right wing and religious parties. Hence war should be avoided, if possible by negotiating a renewed ceasefire that puts an end to incendiary balloon and kite attacks from the Strip.

But the ceasefire package put together by Egyptian military intelligence and UN emissary Nikolay Mladenov leaves to a later confidence-building phase the issue of repatriation to Israel of the remains of two Israeli soldiers killed in the last Gaza war, in 2014. Precisely because this issue is dear to his political base, Netanyahu believes he cannot really afford to relegate it to a later phase which, given the unstable nature of the Gaza border, might never be reached.

The families of the two fallen soldiers constitute a powerful lobby that campaigns against any Gaza deal that does not involve immediate repatriation of their sons’ remains. Hamas, for its part, insists on the freeing of its prisoners in Israeli jails in return for the soldiers’ remains. This in turn generates lobbying against an exchange deal by the families of Israelis killed by those prisoners. Paradoxically, then, by whipping up ultra-nationalist fervor in Israel Netanyahu has helped ensure that no deal can take place.

Q. And the long-term issues and connections?

A. Mladenov and the Egyptians have put together a five-year Gaza package that commences with an immediate ceasefire and the opening of border crossings to facilitate trade into Gaza. The cause of a genuine ceasefire was advanced by Israeli and Egyptian agreement to the entry into Gaza of Saleh al-Arouri, the Beirut-based number two man in Hamas who is in charge of Hamas terrorist activities in the West Bank.

Four years ago it was Arouri’s activities, then emanating from Turkey, that brought about the kidnap-murder of three yeshiva students from settler families in the West Bank and the subsequent summer war between Israel and Gaza. A new ceasefire is worthless without Arouri’s agreement to end terrorist activities outside of Gaza. Arouri’s arrival in Gaza, which required Israeli guarantees for his safety, signaled more than any other development that this ceasefire effort was serious.

Beyond the ceasefire, the recent negotiations have featured a serious effort to promote the sort of economic development that could help put Gaza on track toward greater stability. The plan envisions hundreds of millions of dollars in investment, including by Qatar, into building infrastructure for Gaza in northern Sinai where Egypt would be responsible for security. So tempting did this seem late last week that Netanyahu canceled a trip to Colombia, where he was to meet with Latin American leaders, in the hope of seeing the ceasefire deal to fruition. From Netanyahu’s standpoint a Gaza ceasefire, whether short-term or long-term, would be an ideal achievement to take to elections.

Q. But as of Monday the deal appeared to be off the agenda. Why?

A. One impediment is Israeli: the sensitive issue of repatriating the two IDF soldiers’ remains in the first rather than a later phase. A second is Egyptian and apparently American: the demand to involve the West Bank-based Palestinian Authority by restoring its presence in Gaza. Here PA and PLO leader Mahmoud Abbas (Abu Mazen) is the impediment. He adamantly refuses to implement a new “unity government” measure under which the PA is reinstalled in Gaza as the civil administration while Hamas retains its armed forces. Under such an arrangement Hamas could claim to be the ultimate defender of Palestinians and could start another round of fighting in which, this time around, Abbas’s administration would bear the brunt of Israel’s response.

Abbas is also reluctant to cooperate with a measure endorsed by the US. His objections to President Trump’s recognition of Jerusalem as Israel’s capital have brought about a diplomatic break between the PA and the US. From their standpoint, Trump’s peace emissaries Jared Kushner and Jason Greenblatt can support the proposed Gaza ceasefire precisely because it need not involve Abbas and is based on the chimera of “economic peace”. Yet, at least at the formal level, they still need Abbas’s acquiescence, which he is withholding.

Accordingly, the two most obvious obstacles to finalizing a Gaza ceasefire deal are involvement of the Abbas-led Palestinian Authority and repatriation of IDF soldiers’ remains. What this really means is that the level of trust in the militant Islamist Hamas on the part of both Abbas and Netanyahu is too low to proceed any further. That little progress is likely in the near term was evident when Mladenov, who is a talented negotiator and whose participation is vital, left the area for vacation. The danger of unintended escalation in the August heat remains high.

A. I went to the mass demonstration in Rabin Square last Saturday night that was organized by Israel’s Druze community. In attendance were many thousands of Israeli Druze along with tens of thousands of Israeli liberals and security community veterans, all told about 100,000. No Netanyahu supporters spoke. I saw not a single recognizable religious Israeli (men with kippot, women with long sleeves or skirts) in the crowd--a powerful statement regarding at least one of the divisions plaguing Israeli society.

Retired generals and heads of Mossad and Shin Bet were there to show their solidarity with the Druze, who serve in the security community in large numbers, and with Israeli pluralism and citizen equality. A few serving Druze officers in the IDF had already voiced their objections to being relegated to second class citizenship by the nation state law. This explained the sense of urgency to show solidarity with the Druze at the security level. It was underlined indirectly last week by a statement from IDF Chief of Staff Gadi Eizenkot in which he pleaded to keep politics out of the army and emphasized that the army is blind to soldiers’ ethnic origin. (Currently serving in the IDF are one Druze major general, three brigadiers and 11 colonels; almost 10 percent of Druze in the army volunteer for officers training.)

Q. And the long term effect of the nation state law?

A. Here we encounter what appear to be the real goals of Netanyahu’s coalition in pushing through the nation state basic law. Consider the following two statements made on Sunday in the course of rebuffing Druze and liberal Israeli demands to cancel the law and, instead, offering the Druze financial and material compensation (more “economic peace”) for the insult they have suffered.

Netanyahu: “Without the Nation State law if would be impossible to ensure Israel’s future as a Jewish state for the coming generations”.

Tourism Minister Yariv Levin, who over the past year steered the law through the Knesset: “The hysterics of the political left prove that this is an excellent law. Once the composition of the [High Court] judges is changed, we can get what we wanted”.

Deconstructing these two statements, we arrive at the following insights. First, the ultra-nationalist right, currently Israel’s political mainstream, intends to continue absorbing the land of the West Bank into Israel. Simultaneously it seeks, in one form or another, to disenfranchise more than three million Palestinians living there lest they become Israeli citizens and tilt the demographic balance away from “Jewish” and (with a combined population including 45 percent Arabs but still excluding Gaza) toward “bi-national”. A Jewish nation state in which only Jews determine the country’s constitutional nature is the perfect “legal” legislative vehicle for taking the necessary apartheid-like measures to make this happen.

But a second insight holds that the ultra-nationalist camp knows it needs a judicial vehicle too. Currently it is conceivable that the High Court of Justice will concur with Druze and liberal Jewish appeals against the new basic law. Minister of Justice Ayelet Shaked from the far right Jewish Home party has already threatened a constitutional crisis if this happens, arguing that the High Court cannot strike down what is in effect a new clause in Israel’s emerging constitution. But as matters stand it is only a matter of time until, through high court justice selection and selective legislation, the High Court is packed with right wingers. Hence Levin’s celebratory taunt against Israel’s shrinking liberal political left.

Finally, a third insight. From now until after Knesset elections, almost certainly in early 2019, the prime minister and his followers will cite the Nation State law as a litmus test of loyalty to their concept of Zionism. Half the Knesset, all of Israel’s minorities, and most of the former leaders of Israel’s security establishment are fair game. They are expendable; they can be branded disloyal; they don’t vote for the right anyway. Anything to shore up Netanyahu’s electoral base.