Hard Questions, Tough Answers (10.30.17) - A week to remember: Rivlin and the “handmaiden” vs. the Netanyahus 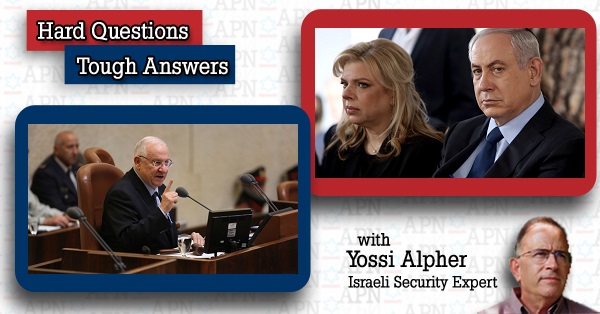 This week, Alpher discusses President Rivlin's attack on Prime Minister Netanyahu and his coalition; Netanyahu's response; how you explain Rivlin; Netanyahu's birthday celebration and his son's birthday greeting; another lawsuit against Sara Netanyahu from an employee of the prime minister's residence; and the bottom line.

A. Rivlin is a very independent-minded Likudnik who places Israeli democracy and pluralism above all. He is obviously appalled at the attitude of Netanyahu’s government toward civil society and by its attempts to fend off, by any means, looming criminal investigations against Netanyahu. Accordingly, in his speech opening the Knesset Rivlin defended the “gatekeepers” of Israeli democracy -- the chief of police, Supreme Court justices, the state comptroller, the media, the IDF and the Shin Bet -- all of whom Netanyahu and his retinue have attacked brutally. Rivlin warned cynically of a “revolution” in which the ruler plays the victim. “‘We’ll show them’ is the soundtrack of the revolution. The stateliness has gone from our country, after us the deluge."

“Tell me, ladies and gentlemen”, he stated, “how can a weak media, begging for its life, be in the interests of the State of Israel or of democracy in general?"

“Majority rule has become exclusive rule”, Rivlin continued, clearly addressing his critique to Netanyahu. “Democracy [now] means rule by the strong. . . . We should bear in mind that governance means navigating the ship and not ensuring that every sailor on its deck is in your image. Leadership in a democratic country is the art of generating agreement, not submission. . . . You, the government, the legislators, have the right and the obligation to make changes in the system, sometimes dramatic and necessary ones. But what do these changes share with attacks on the legitimacy of the institutions themselves? Don’t you still need them?” So angry was Rivlin with the government that he cancelled a traditional social gathering with the prime minister, wives included, prior to the Knesset opening ceremony.

A. Netanyahu’s speech was prepared in advance, hence was not an improvised response to Rivlin. Still, the prime minister found himself responding indirectly to Rivlin by reciting his accomplishments: “The country is experiencing an unprecedented diplomatic and economic boom. In terms of security, we are more powerful than ever. . . . Within a decade we will be a country of ten million citizens, with a GNP of half a trillion dollars. . . . [I meet with] dozens of world leaders. They admire us for our steady and determined war against terror, our technological innovations, and our readiness to send life-saving rescue teams around the world.”

Then the prime minister attacked his critics from the media, the opposition and the left as an “industry of gloom. . . the sourpusses”. Here he used the Hebrew term “chamutzim” which can mean sourpuss but also pickles. Then Netanyahu -- known for the cigar and champagne gifts he solicits from well wishers -- continued sarcastically: “They claim ‘there is a sour feeling among the public. . . isn’t the situation here terrible? Isn’t everything collapsing? By the way, did you remember to reserve tickets for a weekend in London, or are you flying to Berlin?’”

Q. How do you explain Rivlin?

A. He is an old-time Revisionist, a throwback to the Jabotinsky era, who prioritizes pluralistic democracy. His presidency is by law limited to one seven-year term. He is in his seventies. He knows Netanyahu voted against him when he ran for president precisely because the prime minister fears being called to order by an independent head-of-state. He has nothing to lose by going on the offensive.

A couple of years ago, Rivlin faulted national unity by noting that Israeli society is divided into no fewer than four “tribes”-- secular Zionist, national religious, Arab, and ultra-orthodox -- with divisions worsening. Now he is genuinely appalled by the ultra-nationalist, fascistic tone of attacks on state institutions and the media and legislative initiatives emanating from the prime minister’s office and his entourage.

Yet lest we forget, Rivlin is hardly a leftist or a true liberal. In the past, when the police and the state’s attorney investigated his own land dealings, he criticized them as an “evil empire”. The High Court, too, was singled out in the past by Rivlin for “endangering the most sacred foundations of Israeli democracy”. And Rivlin is a strong advocate of a one-state solution that ostensibly enfranchises Palestinians yet magically remains Jewish, Zionist and democratic. As columnist Yaron London noted Friday in Yedioth Aharonot, “It emerges that in his Knesset speech Rivlin was preaching morals to the very politicians who share his territorial yearnings”.

That is Rivlin. His Knesset speech was courageous. Yet it will have no effect on politics. As for Rivlin’s criticism, Netanyahu has little to fear beyond his own paranoia.

A. “I so admire and appreciate the sacrifice you make for the sake of the land of Israel and the people of Israel,” Yair Netanyahu told his father at a party for the prime minister’s 68th birthday. “As someone who will never go into politics”, he added, “it’s an amazing thing to see.”

Thus did Yair Netanyahu kowtow to his father in neo-Stalinist language, with Sara and only the most loyal ministers (those still too young to threaten her husband or suggest they might succeed him) and officials looking on and applauding. Of course the sycophantic clip was posted for public consumption.

For the uninitiated, the Netanyahu family’s understanding of “sacrifice” will be illustrated below. And in the current establishment’s doublespeak, the 26-year old Netanyahu, who lives at home and is unemployed but launches vicious Twitter and Facebook attacks on the prime minister’s political opponents, is very obviously being groomed by his parents for a political career in the best tradition of Israeli political “princes”.

Q. By week’s end, yet another disgruntled and browbeaten employee of the prime minister’s residence was suing Sara Netanyahu. What was unusual about this instance?

A. Allegations of Ms. Netanyahu’s high-handed treatment of employees of the PM’s residence are by now legion. She has been fined for this misconduct. Recently she was indicted over misuse of around $100,000 in state funds allocated for the residence. But last week’s scandal appeared to set new standards for indecency.

Whether this reflects Ms. Netanyahu’s unstable personality or, as her entourage contends every time this happens, an ongoing vicious vendetta of fake news against the Netanyahus, the public will judge. Even if only half of the new allegations are true, they certainly portray incredible delusions of grandeur and lack of sensitivity on the part of Israel’s “royal family”.

The employee in question, S.R., is an ultra-orthodox mother of three hired by a cleaning company to work at the residence. She lasted there one month before resigning, claiming she had been brutalized and humiliated by Sara Netanyahu. The employee stated that Netanyahu did not permit her to eat, drink or take breaks throughout the workday. She was forced to change her clothes and wash her hands repeatedly. Bathroom breaks had to be taken in the security detail’s facilities, outside the residence. First son Yair inspected the cleaning performance by running his finger over elevated spots and stating, “Mom, come look, they didn’t clean here”. Sacrificing for Israel (see above, Yair’s birthday speech)? When the cleaner asked to take a short break, Sara Netanyahu allegedly replied, “I was just in Argentina where I suffered for the State of Israel. It’s chutzpah for you to dare ask for a break.”

A. PM Netanyahu and family long ago wore out their welcome. Netanyahu’s political groupies are trying desperately to legislate the prime minister’s way out of looming indictments. Netanyahu himself is apparently toying with holding snap elections to save himself. This week he will be in London to celebrate the one hundredth anniversary of the Balfour Declaration, where he will undoubtedly claim he is presiding over an “unprecedented diplomatic and economic boom” for Israel. Never mind that the leaders who praise Netanyahu are mainly autocratic ultra-nationalists themselves. Never mind that many of the coalition’s anti-democratic proposals are rejected even within the coalition, not to mention the Knesset.

Netanyahu is an extremely skillful demagogue/politician. In the current ultra-nationalist atmosphere (not just in Israel), his scorched earth tactics toward Israel’s democratic institutions and civil society can still be packaged attractively for loyal Likudniks. Unless Israel’s legal system succeeds in maintaining its integrity and unless it can pin serious charges on the prime minister, it is very possible that only a disaster will cause Israelis to wake up.

And sadly, disaster is inevitable as Israel under Netanyahu slides down the slippery slope toward an ugly one-state entity.