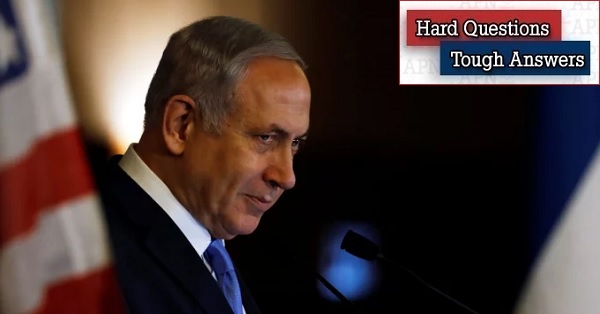 This week, Alpher discusses the possible indictment - on at least three counts - that Prime Minister Netanyahu faces; what the allegations are about; what Netanyahu's options are; how to account for the public's lenient attitude; and if anyone in Israel will emerge from this looking good.

Q. PM Netanyahu now faces possible indictment on at least three counts. What is this about?

A. Netanyahu is implicated in one way or another in five major Israel Police investigations. Most involve crony capitalism at the highest level of government. In two of the cases, investigations have already produced police recommendations to the attorney general to indict the prime minister.

Allegations of this extent of corruption are unprecedented at the prime ministerial level. The ramifications for Israeli society, for standards of governance and for Israel’s overall security are potentially far reaching.

Q. What are the allegations about?

The Israel Police have recommended to the attorney general to indict Netanyahu, Milchen and Moses. A former Netanyahu aide, Ari Harow, has turned state’s evidence in file 2000.

File 3000 is the only security-related case. It involves at least one senior defense official, two lawyers who are very close to Netanyahu and are related to his family, a former commander of the Israel Navy, a former deputy head of the National Security Council, and a former chief of staff in the PM’s office. They allegedly attempted to influence the awarding of a contract to manufacture submarines for Israel to a German firm in return for bribes. That firm would also be permitted by Israel to supply the same model submarine to Egypt, a decision with potential security implications for the Israel Navy. Here too there is a state’s witness. Netanyahu has until now not been implicated directly but is expected soon to be interrogated.

File 4000 involves alleged huge financial benefits from regulators for a media empire in return for favorable coverage of PM Netanyahu and his wife. Last week the police arrested the heads of the media empire and a former media consultant to the Netanyahu family. The director general of the Communications Ministry under Netanyahu, Shlomo Filber, has turned state’s witness and will apparently implicate the prime minister.

Finally, file 1270 involves an alleged attempt to appoint a former judge as state’s attorney general in return for closing a separate case against Sara Netanyahu involving misuse of funds allotted for the prime minister’s residence. Hefetz is under suspicion here too.

One of the striking features of these police investigations, some of which have gone on for well over a year, is the increasingly confident public profile of Chief of Police Roni al-Sheikh and Attorney General Avichai Mandelblit. Over the past two weeks, both have expressed confidence in police findings and recommendations. Note that both are Netanyahu appointees.

Q. And what are Netanyahu’s options?

A. The prime minister proclaims his innocence almost daily. He has also repeatedly attacked Police Chief al-Sheikh, the media and the political left in connection with the investigations and recommendations. Netanyahu’s first and most obvious option is to tough it out and hope he is not indicted or, alternatively, if indicted, try to remain in office. Apparently, from a strictly constitutional standpoint the prime minister is not obligated to resign unless convicted.

The process under which the attorney general reviews police indictment recommendations, decides whether to indict, and permits a hearing for Netanyahu if indicted, could take a year. At least for the moment, however, there are growing calls from the media and the moderate right, center and left for Netanyahu to resign.

So far, Netanyahu’s coalition and his ultra-right base have closed ranks behind him, blaming fake news and left-wing conspiracies. Note that at this point in time, fully 50 percent of the public wants Netanyahu to remain in office and his Likud party continues to lead in the polls. In other words, Netanyahu’s political base is solid at least for the time being.

This presumably gives Netanyahu the confidence to invoke a business-as-usual approach. On the other hand, during the coming months more police indictment recommendations and more state’s witnesses ready to testify against Netanyahu could pile up.

An alternative option is to seek early elections in the hope of scoring a resounding victory. The election process might delay police investigations. The victory would be intended to inhibit and deter investigations by demonstrating public support. But this would be a gamble on Netanyahu’s part: elections take months, the atmosphere could change, he could lose, and in any case he could still be indicted.

Then too, Netanyahu could step aside and allow another Likud minister to take over as acting prime minister, on the grounds that Netanyahu needs all his time and resources to fight the accumulating allegations. But this tactic could backfire if Netanyahu’s replacement becomes entrenched in power and/or Netanyahu loses his legal battles.

That is more or less what happened to Ehud Olmert in 2008-9. He resigned prior to being indicted, in order to fight the indictment. Ensuing efforts to replace him while maintaining his Kadima-led coalition failed, leading to new elections that brought Netanyahu back to power.

Meanwhile, Olmert was indicted, convicted and jailed. Incidentally, at the time it was Netanyahu, leading the political opposition, who called explicitly for Olmert to resign merely because he was under investigation and despite the fact that he had not yet been indicted.

Then too, assuming Netanyahu’s attorneys are convinced and that they persuade Netanyahu that the cases against him are overwhelming, he could instruct them to negotiate a plea bargain that would presumably involve his resignation, fines and a suspended sentence but would keep him out of jail. As prime minister, Netanyahu is best positioned to negotiate a lenient deal, the sooner the better.

Finally, some media observers speculate wildly that Netanyahu could do something extreme such as starting a war to divert public attention, or encouraging his base to take to the streets and engineer some sort of putsch against the legal system.

This last option is definitely unlikely and does not at all fit Netanyahu’s profile of leadership. Toughing it out during the months ahead is Netanyahu’s most likely course. If Netanyahu’s base or a leader of one of the parties in his coalition turns against him, he would presumably look at the other options: early elections or stepping aside in favor of a temporary replacement. If Netanyahu’s legal position, as seen by his attorneys, worsens, a plea bargain attempt becomes a major option that the attorney general and many others would presumably prefer rather than indicting and prosecuting a sitting prime minister.

Q. How do you account for the public’s lenient attitude?

A. The last supposition above regarding hesitation to prosecute a sitting prime minister who enjoys widespread support is important because of what it says about Israeli society. Corruption at the prime ministerial level--even corruption involving Israel’s security (File 3000)--does not seem to bother the ruling Israeli right. Here is Hebrew University historian Dmitri Shumsky in last weekend’s Haaretz:

“We must internalize the fact that the perception of a leader suspect of corruption as a model for emulation reflects an unprecedented change in values, a reversal of ethical norms. The ramifications of such a change cannot but be expressed in the judicial sphere. Accordingly, we must recognize the possibility that none of the files in which Netanyahu is involved will eventuate in indictment. . . . Will [Attorney General Mandelblit] dare to imprison a leader seen by many Israelis not only as one who did not violate laws, but as one who realized the Israeli credo with regard to legitimate individual moral liberties?”

Netanyahu has been in power too long. As Nachum Barnea wrote in last week’s Yedioth Aharonot, “the common denominator of all the police investigations is Netanyahu’s overextended stay in the swamp of ruling the country. . . . The more time goes by, caution dissipates and the sense of entitlement grows.” That is the simplest and most direct explanation of Netanyahu’s behavior.

Most of the public agrees that the prime minister is corrupt. But half the public still supports him. Lest we forget, Netanyahu’s three predecessors--Olmert, Sharon and Barak--all faced corruption charges too.

Israel is by no means the only country displaying public support for authoritarianism, rejection of pluralism and democratic values and, as a corollary, toleration of corruption. This is something of a recent trend in democracies. Netanyahu is in good company with the likes of Trump, Putin, Erdogan, Modi and the current leadership of Poland and Hungary. Indeed, Netanyahu appears to be emulating Trump when he relies on the readiness of his political base to stomach any and every excess, transgression and insult to the intelligence.

Moreover, like in the US, in Israel too the far-right cultivates conspiracy theories about a veteran elitist-leftist “deep state” acting behind-the-scenes to oust Netanyahu. This, regardless of the fact that those prosecuting the cases in question are the prime minister’s own appointees. Revelations on Sunday regarding improper collaboration between a prosecutor and a judge concerning extending the detention of suspects in File 4000 fed right into this paranoia. So did an earlier revelation regarding the judge in File 1270 and Supreme Court Chief Justice Esther Hayut, her close friend: both knew about the bribe attempt yet neither treated it as a crime to be reported to the police. True, these are relatively trivial side shows. But Netanyahu’s supporters are having a field day with them.

In Israel’s case, there are also heavy and ostensibly “existential” security factors. Large portions of the Israeli public perceive Netanyahu as an effective leader successfully blunting threats of Palestinian intifada, Hamas and Hezbollah rockets and Iranian nuclear missiles. Most recently, Netanyahu and his policies are seen as enjoying the all-important sweeping support of the president of the United States.

Netanyahu skillfully encourages the public’s view of him as its indispensable protector through demagogic fear-mongering. Meanwhile, the political opposition in Israeli has failed in recent years to present a persuasive alternative message or leader.

Q. Does anybody in Israel emerge from this looking good?

A. The Israel Police has performed admirably. The State Controller, another Netanyahu appointee, remains independent. The IDF stays out of politics and performs with caution and reserve. And enough of the media has evaded right-wing attempts to intimidate or bribe it (see files 2000 and 4000, above) to continue to present all the news to that part of the public that remains receptive and interested.

Sadly, the otherwise sound justice system has been weakened at least temporarily by the revelations connected to files 1270 and 4000 (see above).

A. Hopefully, some person of stature and integrity from the political opposition or even from Netanyahu’s own political camp will soon emerge to galvanize public and political support for holding the prime minister to a higher standard of personal and political behavior. But that has yet to happen.

Finally, Israel still has plenty of enemies that would be more than happy to exploit an extreme display of national weakness. This means that if and when the crunch does come and Netanyahu leaves the scene and some sort of national crisis ensues, the political system and the public must both demonstrate a greater degree of responsibility and maturity than they currently seem capable of mustering.