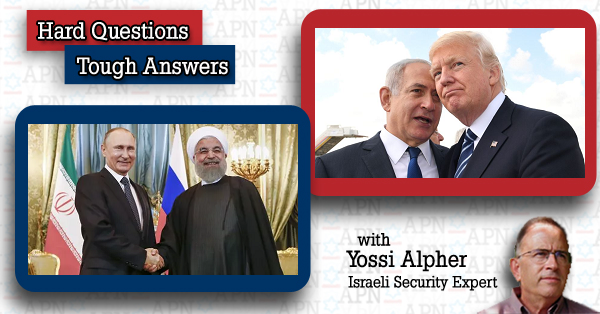 This week, Alpher discusses Prime Minister Netanyahu's urgent trip to Russia; whether the US is prepared to acquiesce in an Iranian power-play under Russian auspices in Syria; if the Putin-Netanyahu conversation yielded the desired breakthrough; how seriously Netanyahu takes the prospect of an Iranian military presence in Syria; and the results of the US peace delegation's recent trip to the region.

Q. In mid-August, PM Netanyahu dispatched a high-level intelligence mission to Washington. Then he himself traveled to meet Russia’s President Putin on August 23. Isn’t this supposed to be vacation time? Why the urgency?

A. Both missions and meetings were about the alarming evolving situation in Syria. The Israeli security community is concerned that recent US-Russian agreement on a ceasefire in southwest Syria near Israel’s border will ultimately perpetuate Iran’s growing military presence in that country. That presence, in turn, is seen as a threat not only to Israel but to the moderate Sunni Arab countries in the region.

On an even broader scale, Iran’s expanding grip on Syria--by means of its own al-Quds Force as well as a variety of Shiite proxy forces from Lebanon (Hezbollah), Iraq and as far afield as Afghanistan--is understood to be part and parcel of a broader Iranian strategy. As Shiite Iranian forces displace defeated Sunni rebel groups, Tehran seeks to establish hegemony from the Iran-Iraq border all the way to the Mediterranean Sea as well as in quasi-Shiite northern Yemen.

Q. The US is Israel’s military ally. Is it prepared to acquiesce in an Iranian power-play under Russian auspices in Syria?

A. That is the question posed in Washington less than two weeks ago by Mossad head Yossi Cohen and a delegation of high-level Israeli intelligence officials. They reported back to Netanyahu that the senior security officials with whom they spoke in Washington were not able or not prepared to commit the US to endorse Israel’s minimal demand: that any future agreements regarding Syria include an explicit commitment that Iranian and/or Hezbollah forces would not be deployed on the Syrian Golan, facing Israel.

The Israelis visiting Washington reportedly encountered “confusion and the absence of a clear policy” in the US National Security Council. They understood this in the context of Trump administration disarray along with US preoccupation with seemingly more pressing crises such as North Korea and Afghanistan. Then too, there is Trump’s own apparent lingering desire to find ways to work with the Russians, beginning in Syria.

One way or another, the Cohen delegation’s report back to Netanyahu sent the prime minister directly to Putin, for the two leaders’ sixth meeting in less than two years.

Q. Did that Netanyahu-Putin conversation last Wednesday, held in Sochi on the Black Sea, yield the desired breakthrough?

A. Apparently not. Netanyahu briefed the press afterwards that “I told Putin that [the Iranian presence] is directed against us and we will not remain indifferent. I said this in the clearest and most detailed manner. We’ll respond wherever necessary on the basis of our red lines”. In the past, those “red lines” were understood to mean Israeli rejection of Iranian strategic arms supplies to Hezbollah in Lebanon and of Iranian or Iranian-proxy forces near the Golan border.

Thus far the challenge confronting Israel has been the modalities of interdicting hostile Iranian activity in Syria without clashing with the Russians there. More recently, Defense Minister Avigdor Lieberman committed Israel to preventing Iran from manufacturing strategic weapons for Hezbollah (to bypass Israel’s attacks on Iranian arms supplies) on Lebanese soil.

On a broader scale, Israel seeks assurances that Iran and its proxies will eventually leave Syria entirely. Here Israel is backed up by pro-western Sunni Arab states like Jordan and Saudi Arabia.

We don’t know what Putin responded. But it seems logical to assume that he would not commit to removing Iranian forces from Syria. Iran, after all, is the ally of both Russia and Syria. In any case, it is likely that Iran would reject such a Russian demand. Meanwhile, Netanyahu and his intelligence chiefs have been sketching out for both the US and Russian leadership Iran’s progress toward establishing its own naval facilities on the Syrian Mediterranean coast--the first presence on the Mediterranean shores of Persian military forces for nearly 2,000 years, since before the dawn of Islam.

As for the area near Israel’s border with Syria, Russia has pledged to police a ceasefire zone there, but Israel has no obvious way of enforcing its demands there regarding Iran while avoiding friction with Russian “peacekeepers”. Indeed, Moscow may consider it useful to allow Iranian-Israeli friction in Syria insofar as this reinforces Damascus’s need for a Russian presence.

Q. Exactly how seriously does Netanyahu take the prospect of an Iranian military presence in Syria?

A. Netanyahu appears to take that presence as seriously as he took the Iranian nuclear program when he sought to thwart the nuclear freeze agreement, the JCPOA, that Iran eventually agreed with the international community more than two years ago. According to a number of former Israeli senior security officials, it was only their vociferous objections at the time that sidelined Netanyahu’s plan to attack Iran.

Now, too, it appears that at least some security officials are cautioning Netanyahu that Israel need not escalate recklessly against the Iranians in Syria, thereby risking clashes with the Syrians and even the Russians, and that more moderate alternative military options are available. Thus for example Udi Dekel, a former chief of strategic planning in the IDF, wrote last week for the Israel Institute for National Security Studies that “the Iranian threat from Syria does not at present constitute an insufferable security threat for Israel, nor apparently in the future. This is particularly so if Israel correctly exploits the tools at its disposal in order to reduce Iran’s dominance and limit its threat in the Syrian arena”.

Some would add that, as with Iran’s nuclear program, Netanyahu is whipping up popular Israeli concern with the Iranian presence in Syria to serve his own demagogic objectives and divert attention from both the Palestinian issue and his own pending indictments for corruption.

On the other hand there are former security officials who harbor no special allegiance to Netanyahu who agree with his extreme threat assessment regarding Iran in Syria. They caution, on the basis of extensive experience, that Russia has its own agenda for Syria and the Middle East and that, in view of the Trump administration’s lack of direction, Israel has effectively lost strategic control over what happens to its north. Add to this the prospect for a confrontation over the Syria issue with Trump, and we risk a replay of the prolonged crisis with the Obama administration generated by Netanyahu’s objections to the JCPOA.

Q. Last week a US Middle East peace delegation led by Jared Kushner and Jason Greenblatt visited Israel, the Palestinian Authority and a number of Arab states. Any breakthrough here?

A. None reported. Palestinian leader Mahmoud Abbas complained publicly that he could not get the Americans to commit to the two-state solution that has been a hallmark of American policy since the George W. Bush administration. Indeed, a US official stated last week that such a commitment would “bias” Washington’s peace efforts. Confronted with Kushner’s advocacy of little more than regional plans for security and economic investment, Abbas tried lamely to put the best face possible on the situation.

But the Palestinian media reported that in the absence of progress, Abbas would consider dissolving the Palestinian Authority. Sadly, that step has been threatened so often that it carries little weight these days.

All in all, no new plans for renewed Israeli-Palestinian negotiations emerged. Indeed, it seems increasingly likely that the Trump team, having sized up the dismal prospects for negotiating a two-state solution under current circumstances yet remaining “very committed” to achieving Israeli-Palestinian peace, has decided simply to dance around the real issues. Meanwhile, it will rally the Gulf states to provide financial support to the Palestinians. And it will try to patch up the dispute between Qatar and the rest of the Gulf that erupted following Trump’s May visit to Riyadh.

Putting the best face on the situation was also the response of Egypt’s President Sisi when meeting with the American team last week. The visit came on the heels of a State Department decision to withhold nearly 200 million dollars in US aid as a penalty for Egyptian “lack of progress on human rights” and for new and drastic Egyptian constraints on non-governmental organizations.

How can Sisi reconcile Kushner’s pleasantries with Secretary of State Tillelson’s penalties? He is presumably aware of what his neighbors did. Confronted with the Trump administration’s inconsistencies and contradictions, Netanyahu went to the Russians. And Abbas famously sent independence day greetings to the North Koreans just prior to the Kushner team’s visit.

A. All over the Middle East--from Israel to Qatar, from Cairo to Ramallah--we are witnessing the appalling ignorance, inconsistency and indifference of the Trump administration. Russia and Iran are reaping the benefits in Syria. Traditional allies of the US are dismayed. Israel has serious reason to be concerned.