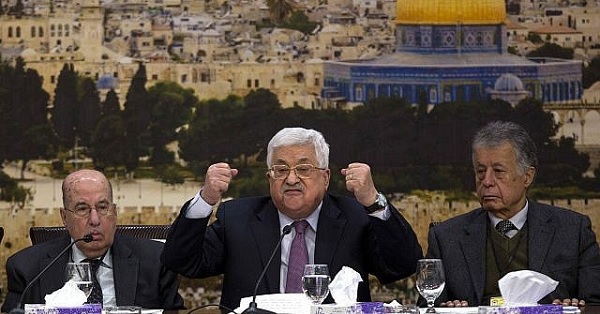 The Chairman of the PLO and its Central Council over the past couple of days nullified the Oslo Agreements, conditioned recognition of Israel on Israeli recognition of Palestinian sovereignty, shunned the Trump Administration as a peace broker, and announced they would seek further recognition in international fora.

The Palestinian Central Council (PCC) statement followed an inflammatory and unconstructive speech by Palestinian Authority President and PLO Chairman Mahmoud Abbas to the Council in Ramallah on Sunday.

Americans for Peace Now (APN) condemns the offensive language that Abbas used and particularly the unacceptable conspiracy theories that he repeated.

As unfortunate as some of Abbas's comments were, he was expressing the Palestinian public's deep frustration with the Trump Administration's disregard for the national aspirations, practical requirements, and sensitivities of Palestinians in shaping their future relations with Israel and the administration's failure to effect progress toward a viable, lasting Israeli-Palestinian peace.

Likewise, the PCC's statement reflects an utter lack of confidence in Trump's leadership and his ability to broker peace negotiations with Israel, as well as a Palestinian conviction that the current Israeli government is not a partner for peace.

It is important to note that neither Abbas nor the PLO's governing body have abandoned diplomacy, nonviolence, the commitment to a two-state solution, or future peace negotiations with Israel.

These developments in the Palestinian arena must serve as a wake-up call for President Trump, who came into office promising to broker the "ultimate deal" between Israelis and Palestinians, and instead is using his office as a wrecking ball to damage progress reached in the past toward a viable two-state solution.

APN's President and CEO Debra DeLee said: "Yet again, we see the results of Trump's miscalculation in assessing that the United States could take Jerusalem 'off the table' and elicit a mere 'cooling off period' among Palestinians. The current crisis was entirely preventable and generated in the Oval Office. The resulting damage impacts primarily Palestinians and Israelis who need and deserve peace, but also American national security interests. It is a self-inflicted wound by Trump, who ignored the advice of America's leading regional experts.

"Right-wing Israeli politicians, themselves opponents of a two-state solution, have spun opportunistically Abbas's statements as proof that he does not want peace in order to portray him as the reason for the lack of Israeli-Palestinian peace. These demagogues should be reminded that, as he has done for many years, Abbas embraced the two-state solution: a sovereign and independent Palestinian state in the West Bank and Gaza with its capital in East Jerusalem, living side by side with Israel in peace and security."