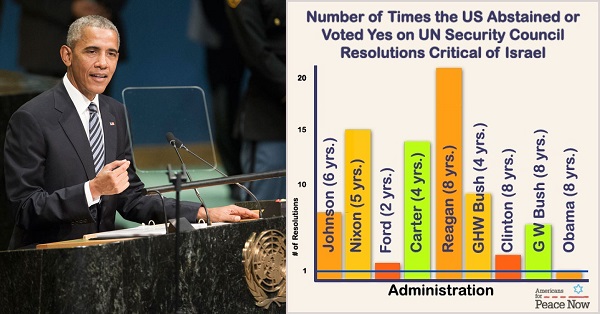 And they particularly matter when it comes to a respectable publication like Bloomberg.com and a reputable journalist such as Eli Lake.

In an article that discusses the Trump transition team’s apparent efforts to lobby foreign governments to veto a UN Security Council resolution critical of Israel from which the Obama administration abstained, Lake writes the following: “Even though the Obama administration had less than a month left in office, the president instructed his ambassador to the United Nations to abstain from a resolution, breaking a precedent that went back to 1980 when it came to one-sided anti-Israel resolutions at the UN.”

This assertion perpetuates a canard, which APN has refuted multiple times, that portrays Obama’s foreign policy as hostile to Israel. In fact, as we demonstrated in a New York Times op-ed in April 2016, President Obama’s term in office was the one in which the US abstained from voting on the fewest UN Security Council resolutions critical of Israel (when it could have “protected” Israel with a veto). Most recently, we heard a repetition of this bogus condemnation of President Obama from US Ambassador to Israel David Friedman in his speech to the Zionist Organization of America. 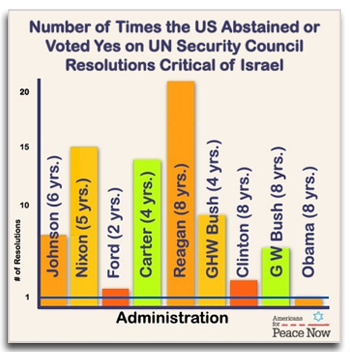 For Obama, the December 23 2016 abstention from UNSC Resolution 2334 was a first. During his eight years in office, this was the only resolution critical of Israel that the United States allowed to pass. Furthermore, since 1967, every other American president allowed -- or even had the United States vote for -- Security Council resolutions taking Israel to task for actions and policies toward the Palestinians and other Arab neighbors. It happened seven times under President Johnson, at least 15 times under President Nixon, twice in Gerald Ford’s short term, 14 times under Carter, a whopping 21 times under Reagan, nine times under George H. W. Bush, three under Clinton and six under George W. Bush.

These are the facts. One should keep them in mind in coming days and weeks, as the discussion around the actions of Trump’s transition team intensifies.