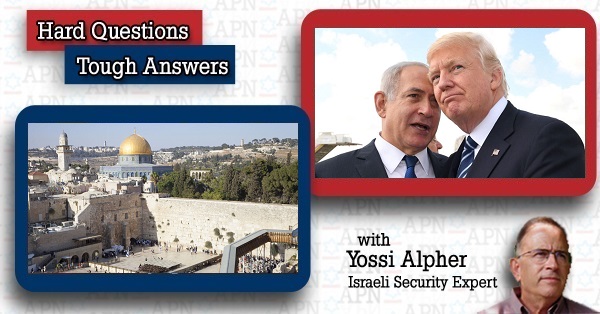 This week, Alpher discusses whether Trump will announce his decision to recognize Jerusalem as Israel's capital and whether this would spark the next intifada; the settlements issue as part of the Trump-Russia investigation; the 70th anniversary of the United Nations decision to partition Palestine and the Palestinians' and Arab countries' rejection of it in 1947; and whether the Netanyahu government should and could have intervened in Syria in 2012, toppled the Assad regime and installed the secular opposition in power.

Q. Trump will reportedly announce this week his decision to recognize Jerusalem as Israel’s capital. Could this be the spark that starts the next intifada?

A. The Palestinian leadership in Ramallah is crudely threatening such an intifada, using language like “violence could ensue and we won’t be able to stop it.” Strictly speaking, this is an unacceptable admission that the Palestinian Authority does not exercise basic control over its populace. In fact, it is a not so subtle threat of PA-approved violence against what the Arab world is liable to consider a scuttling of the peace process.

At the time of writing, President Trump was scheduled to announce whether or not he would extend for an additional six months the freeze on moving the US embassy to Jerusalem. One way or another, some sort of groundbreaking pronouncement on Jerusalem has been projected by the administration for announcement on Wednesday December 6.

Trump apparently feels it necessary to take action on Jerusalem in order to make good on a campaign pledge to “move the embassy” before his first year in office is up. As the Russia investigation closes in on him, he presumably also wants to whip up support from his pro-Israel base of evangelicals, Orthodox American Jews and hawkish ultra-nationalists. Then too, Netanyahu is undoubtedly egging him on: the Israeli prime minister, too, is facing growing legal threats and needs to rally his base with a Jerusalem “victory”.

On the other hand, some of Trump’s advisers are undoubtedly telling him that a move on Jerusalem now will contradict the spirit of his anticipated Israeli-Palestinian peace plan. The PA/PLO’s Abbas threatens to cease all peace process contacts in response to the move. Jordan’s King Abdullah II has lobbied Washington strongly against the move, warning of negative consequences. Egypt too has warned against a Trump move on Jerusalem.

There are a number of ways Trump might address the Jerusalem issue that could either dampen or fan the flames of Palestinian and Arab state anger. On the side of moderation, he could recognize only West Jerusalem as Israel’s capital. This could be seen to imply endorsement of a two-state solution in which East Jerusalem is the Palestinian capital. Trump could also extend the freeze on moving the embassy even as he recognizes Israel’s capital in Jerusalem, thereby removing at least one cause of threatened Palestinian unrest.

None of this might make any difference to Palestinians and the Arab world. Certainly recognition of “Jerusalem”, without distinguishing east from west or a united city from a partitioned city, will be an obvious casus belli for Palestinians, as will moving the US embassy.

Of course it’s also possible that Trump, Kushner and partners know perfectly well that their peace plan has no change at all of being accepted by the PLO. Conceivably they view a provocative Trump initiative on Jerusalem as a way to scuttle the process, please their constituents, and “blame the Arabs”. After all, at a time when Arab revolutions and civil wars that have nothing to do with Israel are decimating countries like Syria, Yemen and Libya, a statement by Kushner (at the Saban Forum on Sunday) to the effect that “if we're going to try and create more stability in the region as a whole, this issue has to be solved," shows just how out of touch the Trump team is.

The region will remain unstable no matter what happens to the Israeli-Palestinian peace process. Militant Islam is not interested in a two-state solution, which should be advanced first and foremost for the good of Israel and the Palestinians. Meanwhile, whatever Trump touches in the rest of the region--the Kurds, Syria, Saudi Arabia-Qatar--seems to go bad.

Q. Now the settlements issue has become part of the Trump-Russia investigation. . .

A. It emerges that in December 2016, during the presidential transition period, Netanyahu asked Trump to lobby against UN Security Council Resolution 2334 which declared the settlements illegal. Trump son-in-law Jared Kushner sent future National Security Adviser Michael Flynn to the Russians to persuade them to veto the resolution. The move failed, to Netanyahu’s consternation, and the resolution passed. Kushner’s and Flynn’s activities constituted, at a minimum, illegal collusion with a foreign power before the new administration had taken office.

In historical perspective, we will look back and recall that the settlements cause, already a disastrous symbol of Israel’s decline as a Jewish and democratic state, was also sullied by being caught up in a host of illegal, unethical and plain outrageous acts of collusion with Russia by Trump and his entourage.

Q. November 29 constituted the seventieth anniversary of the United Nations decision to partition Palestine. Back in 1947, the future Israel welcomed the decision while the Palestinians and Arab countries rejected it. Has the Arab world learned anything from this?

Accepting 181 openly is important for Palestinians if they are to accept a two-state solution, meaning another version of partition--this one inevitably far less generous to their needs and demands than that of 1947 which they turned down. Resolution 181 awarded them around half the land of Mandatory Palestine; a two-state solution based on the 1967 lines awards them at best 22 percent of the land. Perhaps more significant, acceptance of partition’s creation of a “Jewish state” also implicitly obliges Palestinians to abandon their demand for the right of return of 1948 refugees--perhaps the biggest ideological-historical stumbling block to successful two-state negotiations.

But it would not be enough, particularly when on the Israeli side more and more adherents of the dominant right-wing nationalist mainstream are taking their distance from two states and from partition. The West Bank settlement enterprise represents a claim to Israeli sovereignty over all of Mandatory Palestine. A majority within the current governing coalition appears to agree. True, PM Netanyahu ostensibly still adheres to the idea of a Palestinian state with security restrictions on its sovereignty. But he insists he won’t remove a single settlement. He is undoubtedly aware that even if conceivably he has his way--backed apparently by the Trump peace team--this will not be a genuine two-state solution, real partition will be off the negotiating agenda, and conflict will continue.

Incidentally, had the Palestinians and Arab states accepted 181 back in 1947, an expanded Jerusalem including Bethlehem would have belonged to neither state. It would have been a corpus separatum under UN rule. Instead, in the fighting that followed the partition resolution Jordan took control of East Jerusalem while Israel declared its capital in West Jerusalem. That partition status prevailed until 1967 when Israel “united” Jerusalem. But note that under international law, 181 prevails. This explains why there are no embassies in any part of Jerusalem.

Q. Turning to Syria, several serious strategic thinkers in Israel are arguing that the Netanyahu government should and could have intervened there in 2012, toppled the Assad regime and installed the secular opposition in power. Does this make sense?

A. This is extremely shaky speculation. Yes, Israel could have intervened in Syria before the appearance of ISIS, at a time when the Assad regime was weak and beleaguered and Iran and Russia had not yet intervened. Yes, it could conceivably have removed Assad from power. At the time, a variety of secular Syrian opponents of the regime were asking Israel for help. Naturally they pledged to live at peace with us (in return for the Golan Heights) once we had helped them take power.

But for Israel to meddle in an Arab neighbor’s politics and state structure? We’ve been there before, in 1982 in Lebanon, and the outcome was horrific. We occupied Beirut, installed a supposedly friendly Christian president in power, kicked the PLO out, gave Syria a bloody nose, and ended up with no friends and only enemies in Lebanon. It took us 18 years to extract ourselves. Our neighbors--all of them--never forgave us. The outcome was more war and destruction, not peace. Separately, we tried to dictate to Palestinians under our occupation who would rule them, and even that failed miserably as Israeli-appointed West Bank and Gaza leaders were assassinated by the PLO.

Two retired and very distinguished IDF generals, Amos Yadlin and Amiram Levin, argued recently that Israel should have intervened in 2012. Recall that at the time, PM Netanyahu was locked in conflict with his most senior security advisers over Netanyahu’s demand that Israel attack Iran to thwart its nuclear program. Perhaps it is fair to say in retrospect that Netanyahu’s interventionist energies would have been better devoted to Damascus than to Tehran.

But Israeli intelligence back then got Syria all wrong. No one predicted at the time that ISIS, Iran and Russia would enter the fray in Syria. There were even (incorrect, in retrospect) learned predictions then that Assad would fall anyway. Taken together, these assessment errors would have constituted a disastrous intelligence basis for intervening.

But most important, have we really begun to forget the lessons of 1982? What if we intervened and Assad survived? He would have rallied the entire Arab world against the Israeli aggressor. What if we occupied Damascus and couldn’t extract ourselves? What if the “moderate” Syrians turned out to be (surprise, surprise!) not so moderate? In any case they all seemed woefully unorganized and incapable of taking advantage of military support. But why suffice with Assad when we could theoretically have intervened in Egypt to remove its Muslim Brotherhood president, Mohammed Morsi, and “restore order” to another neighbor?

One presumed background factor behind speculation regarding what we should have done in Syria is the sense that now, with Assad surviving and the Iranians and Russians embedded to our north, we confront a real strategic dilemma (Egypt turned out alright without our help). “How could we have avoided this?” the pundits ask.

My answer is that we couldn’t, any more than we could or should have prevented revolutions in six Arab countries in 2011 and mayhem in Iraq after 2003--all developments that have eased the Iranian and Russian entry into the Levant and elsewhere in the Arab Middle East.

Some of these negative developments (e.g. Iraq) represent disastrous American policy decisions. Some represent unpredictable tides of history. With all due respect, all of them dwarf little Israel and its aspirations. While Netanyahu would have been reckless to an extreme had Israel attacked Iran’s nuclear infrastructure back in 2012, his caution then and ever since regarding intervention in Syria is, I believe, justified. Yes, Iran is getting close and the Russians are problematic friends. And yes, the US under Trump continues to make mistakes based on ignorance and hubris. But we have to know our place in the greater geostrategic scheme of things.

Setting red lines for the Iranians and Hezbollah in Syria, including for Iran’s efforts to enhance Hezbollah’s missile arsenal, makes sense. Coordinating with the Russians in Syria, to the greatest extent possible, makes sense. Encouraging coherent US policies in the region of course makes sense. We seem currently capable of enforcing our red lines successfully without getting dragged into a new war.

True, that war may well come despite Israel’s deterrent and preventive efforts. But we’ll fight it from a defensive pose based on national consensus. History has shown that that’s the best way.