Just in time for Chanukah - A terrific book and a terrific offer! 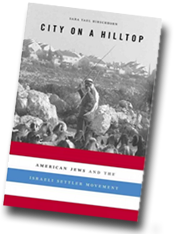 For a donation of $108 or more, APN will send you "City on a Hilltop: American Jews and the Israeli Settler Movement", by Dr. Sara Hirschhorn, who has written a Chanukah message for APN below.

This Chanukah, it may seem to many of Americans for Peace Now’s supporters that the light of peace has snuffed out in the region. Will all the stakeholders somehow be able to burn the midnight oil to achieve a peace deal? Can the beacons of liberalism, democracy, and justice outshine forces of illiberalism, racism, and despair in Israel/Palestine? It seems like we may truly need a miracle to save the two state-solution this year.

Many of us have watched with consternation as the current U.S. administration (with a new cast of characters in the White House that have long been associated with the right-wing) has changed enduring policies regarding the status of Jerusalem and possibly the settlements question. Yet, the story of American Jews and the Israeli Settler Movement is one far deeper than a small circle advising the sitting president over the past few months. Iit is the saga of over 60,000 American Jews who chose to leave comfortable lives in the United States to settle at the heart of the Israel-Palestine conflict and make history over the past half-century. This Chanukah, we need to listen to scholars and policy-makers who can shed new light on these pressing issues for Israelis and Palestinians.

Dr. Sara Yael Hirschhorn is the University Research Lecturer in Israel Studies, Faculty of Oriental Studies and the Sidney Brichto Fellow, at the Oxford Centre for Hebrew and Jewish Studies, University of Oxford