Rob Eshman and the Rabbi 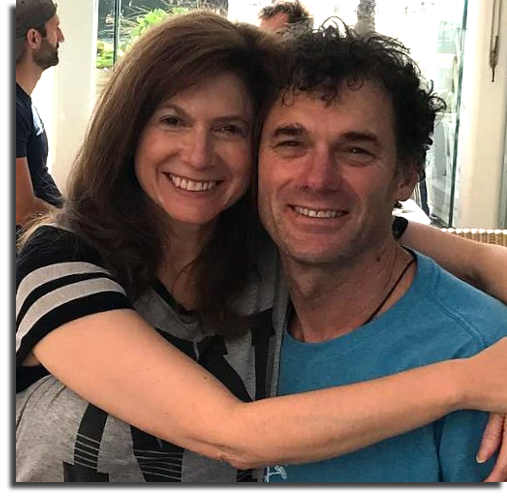 My husband Rob Eshman will be receiving the Press for Peace Award at the Americans for Peace Now “Vision of Peace Celebration” on January 29, 2018, which I am honored to Co-Chair. You may not know him, but allow me to say a few words - objectively, of course - as to why he is so deserving of this honor, and why I encourage you to support the event and the organization that is sponsoring it, even if you are unable to attend.

In addition to my personal affection for Rob, I have immense respect for his vision and courage. He was the long-time editor of The Jewish Journal of Greater Los Angeles, and the accompanying website jewishjournal.com, which under his leadership became the most visited Jewish news website outside of Israel. Beyond the numbers, however, he has provided the local and international Jewish community and other interested readers, with what too often is lacking -- thoughtful, honest, comprehensive, and varied opinions and perspectives on Israel and Jewish affairs. He has not shied away from taking public stands himself, most often expressed via his weekly columns, which while controversial for some, have always been motivated by his love and deep connection to the Jewish people and to Israel. I believe that through his writing, leadership, and courage, he has significantly impacted the discourse on these important issues. 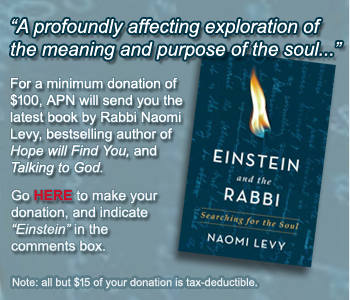 I am proud that Americans for Peace Now has chosen to honor Rob with its Press for Peace Award in recognition of his unique contributions. It is also very exciting for me, and humbling to him, that he will be honored alongside David Broza, the Israeli music icon and peace activist.

For the vast majority of you who will not be able to attend the Vision of Peace Celebration in Los Angeles, I encourage you to participate with us by donating to Americans for Peace Now. You will be supporting the work of the organization here in the US, and of Shalom Achshav (Peace Now), its partner in Israel. Your donation will provide an opportunity to include a Vision of Peace Tribute Message – whether specifically to David Broza, Rob, or the cause of peace for Israel – and I am flattered to say that Americans for Peace Now is also offering my newest book “Einstein and the Rabbi: Searching for the Soul” for a donation of $100 or more (indicate "Einstein" in the comments box).

Go HERE for the invitation to the event and a link to the response card and online donation page.

Rabbi Naomi Levy, a member of the first class of women to attend The Jewish Theological Seminary’s Rabbinical School in New York City, is the founder and spiritual leader of Nashuva, a groundbreaking Jewish outreach organization based in Los Angeles. She is also a best-selling author and nationally noted speaker on revitalizing faith, spirituality, healing and prayer, and has appeared on NBC’s Today Show, Oprah, and been featured in Parade, Redbook, Self, The Los Angeles Times, The Boston Globe and Los Angeles magazine. In recognition of the impact she has made, the Jewish Forward identified Rabbi Levy as one of the nation’s 50 most influential Jewish leaders and Newsweek included Rabbi Levy in its list of "Top 50 Rabbis in America."