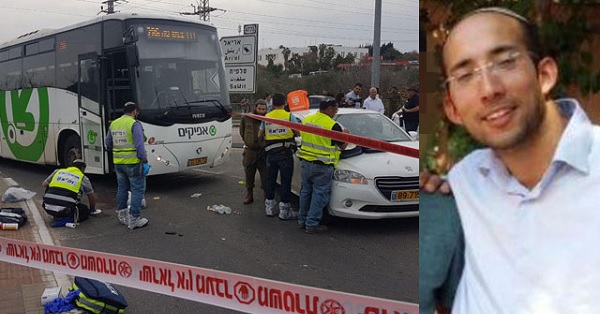 Americans for Peace Now condemns in the strongest possible terms the murder of Rabbi Itamar Ben-Gal, who was stabbed to death outside the West Bank settlement of Ariel. A teacher and father of four, Ben-Gal was a resident of the settlement of Har Bracha outside Nablus. A Hamas spokesman praised the killing as “a continuation of the resistance to Trump’s Jerusalem declaration.”

Ben-Gal is the second Israeli settler to be murdered in the West Bank this year. In January, Rabbi Raziel Shevach was shot outside Nablus. APN also condemned his killing unequivocally.

As was the case after Shevach’s murder, right-wing Israeli politicians are shamelessly exploiting Ben-Gal’s death in order to advance annexationist agendas.

Agriculture Minister Uri Ariel of the settlement-boosting Jewish Home party issued a call to annex the West Bank. “The time has come for the recognition of the Land of Israel,” he said. “We, in the government, are responsible for security and also for retribution, for the building of the land of Israel. We don’t need to wait for someone to be murdered to build Havat Gilad or Har Bracha… From the [Jordan] river to the [Mediterranean] sea there will be one country; no other nation will be sovereign in this area. The time has come for sovereignty.”

Deputy Defense Minister Eli Ben Dahan, also of the Jewish Home party, demanded punishment for the families of Palestinians who kill Israelis. That would amount to collective punishment, a war crime under international law.

As was the case after Rabbi Shevach’s murder, further violence is ensuing. Calls for revenge precipitated a riot by settlers in which a Palestinian was injured and Palestinian vehicles were prevented from entering Nablus. In the manhunt for Ben-Gal’s killer, one Palestinian was killed and more than forty others were wounded.

Debra DeLee, President and CEO of Americans for Peace Now, said, “The murder of Rabbi Ben-Gal is abhorrent and must be condemned universally, including by Palestinian President Mahmoud Abbas. What we need going forward is leadership on all sides, and most of all skilled diplomacy that can ameliorate this crisis, rather than allowing the cycle of violence to continue unabated. That was not forthcoming after Rabbi Shevach’s murder, which the Netanyahu government used as a pretext for recognizing Havat Gilad, the illegal settlement outpost in which Shevach lived.

“Tragically, there are no signs of such enlightened leadership emerging following this tragedy either, including from the Trump Administration, whose ability to mediate the Israeli-Palestinian conflict was damaged gravely by President Trump’s announcement on Jerusalem. The only way to end the conflict and significantly scale down the violence is through a negotiated peace agreement resulting in two sovereign states living side by side in peace and security.”

APN Condemns Murder of Settler, Warns Against Settlement Construction as Revenge
"Price Tag" Escalation Timeline: Jan 1, 2011 - Oct 18, 2017
Peace Now in the News: February 4 - 7, 2018
NEW ITEM - Goal: Lower the expectations of the Palestinians - The Friedman File: APN Watch on soon-to-be-ex-US Ambassador to Israel
On Purim 2016: "Not in every hour does a miracle happen."