Netanyahu and Trump Fail Again to Provide Hope for Peace 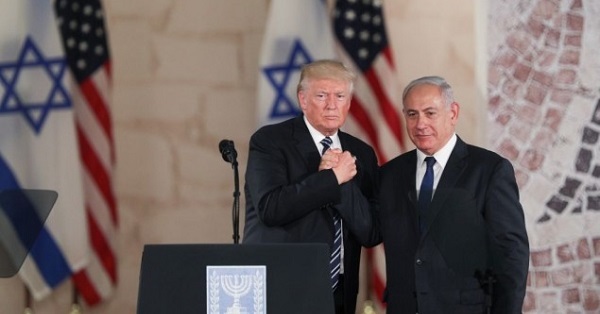 "Donald Trump and Benjamin Netanyahu again missed an opportunity to offer Israelis, Palestinians, Americans, and the world a shred of hope for peace.

"Israelis and their friends in America deserve better, as do the Palestinians.

"At the AIPAC conference, Netanyahu addressed an immense crowd of 18,000 pro-Israel activists. Instead of telling them what he and his government intend to do to advance peace, he – as usual – chose to lambast the Palestinian leadership and shift the focus to Iran.

"As he faces three criminal investigations and likely indictments, Netanyahu is beholden to extortion from his extreme right-wing coalition members and is failing to show the kind of leadership that Israelis want and deserve. Facing mounting pressure at home, Netanyahu basked in President Trump's embrace and that of AIPAC's hawkish crowd. Unfortunately, the Trump Administration continues to provide Netanyahu with full backing to kill the prospect for a two-state solution, jeopardizing Israel's future as a liberal democracy and a Jewish state and putting America's national security interests in the Middle East at risk.

"As for AIPAC, which reportedly set out this year to woo progressive American Jews: well, good luck with that. Progressive Americans – Jews and non-Jews alike – care about peace, human rights, Palestinian statehood, and Israel's character as a respected member of the family of nations. As long as speakers like Netanyahu, Vice President Pence, and US Ambassador to Israel David Friedman set the tone at your conference, progressive Americans will seek their pro-Israel home somewhere else."

The New Yorker: Friends of Israel
NEW ITEM - Goal: Lower the expectations of the Palestinians - The Friedman File: APN Watch on soon-to-be-ex-US Ambassador to Israel
APN to AIPAC: Disinvite Netanyahu from the AIPAC Policy Conference
Ambassador Friedman's "pearls of wisdom" at AIPAC
APN's Ori Nir, hosted by a Ramallah-based newspaper, urges Palestinians to reach out to progressive US Jews
APN to Netanyahu: Quit the Iran Diversion and Address Israel’s Existential Threat
APN's Lara Friedman in The Huffington Post: "The problem isn’t Trump. The problem is, and has long been, AIPAC"