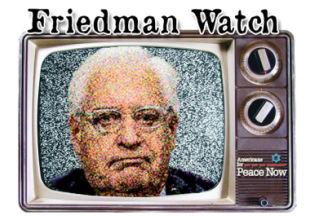 US Ambassador to Israel David Friedman had a front-row seat at this week’s AIPAC conference. The camera panned frequently to Friedman, reportedly the key shaper of US policy on the Israeli-Palestinian conflict, as AIPAC darlings like US Ambassador to the UN Nikki Haley and Israeli Prime Minister Benjamin Netanyahu pandered to the crowd.

Friedman made waves during his own speech in which he lambasted the catchphrase, “pro-Israel, pro-peace,” that APN first popularized nearly two decades ago. Friedman shared these pearls of wisdom with the AIPAC crowd:

• “Pro-Israel and pro-peace sounds like a completely reasonable position. My friends, it is not.”

• “It is no less than blasphemous to suggest that any Jew or any Christian is against peace.”

• “If there is no peace in the Middle East as we speak, and regrettably there is not, I strongly suggest that we blame someone other than Israel.”

(see the transcript of the entire speech)

We’ve got news for you, Ambassador Friedman. Supporters of Israel are not, as you suggest, inherently pro-peace because their faith traditions include liturgy that exalts the value of peace. If your version of “pro-Israel” entails supporting the settlements (as you have spent your adult life doing) and denying the occupation, you are denying Israelis the peace they need, want, and deserve. You are thwarting the future of an Israel that remains Jewish and a liberal democracy. And as such, you are pushing Israel to follow a course that imperils its future.