On the Eve of Nakba Day, APN Deplores Loss of US Leadership; Calls for Responsibility and Restraint 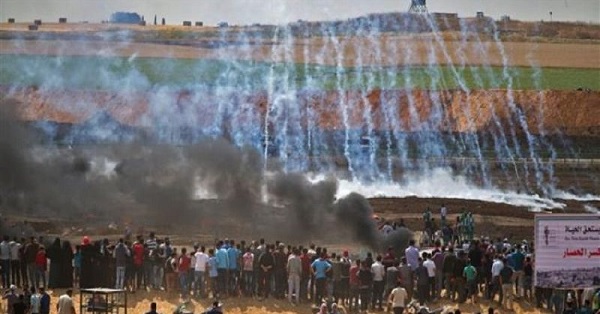 Americans for Peace Now calls on both Israelis and Palestinians to exercise responsibility and restraint tomorrow to avoid further bloodshed and deterioration toward another Israel-Hamas war.

Today's death toll on the Gaza border, 58 Palestinians killed and some 2,000 injured, of them eighty severely injured – seems to be the preamble for even heavier bloodshed tomorrow as Palestinians commemorate the 70th anniversary of the 1948 Nakba, which Palestinians observe as their national catastrophe.

In recent days, Palestinian leaders have called on residents of the Gaza Strip, the West Bank, and East Jerusalem to clash tomorrow with Israeli forces. The IDF is amassing forces in areas of friction with Palestinians and has shown that it will use deadly force.

Hamas in Gaza is warning that it will avenge today's killings by resuming rocket fire against Israel. Israel has already used its air force to hit Hamas targets in the Gaza Strip.

Although we pray otherwise, tomorrow's carnage seems all but unavoidable. It is disastrous that we have reached a situation in which nobody – neither Israeli leaders nor Palestinian leaders, and tragically not President Trump or other world leaders – has the wherewithal or credibility to step in and de-escalate.

Today's bloodshed, and tomorrow's expected deterioration, should serve as a wake-up call for all stakeholders in the Israeli-Palestinian conflict.

Palestinian leaders, particularly Hamas's leaders in the Gaza Strip, must act responsibly and steer civilians away from confronting armed Israeli soldiers. Regardless of whether the IDF's rules of engagement are legal or justified, encouraging Gazans to approach the border fence or to breach it is irresponsible and suggests disregard for the value of human life.

Israeli leaders must urge troops to minimize the use of deadly force. Targeting unarmed civilians with live ammunition, when they do not risk the lives of Israelis, is unethical and regarded as illegal by international law experts.

Finally, the Trump administration must rebuild America's credibility as an effective, reliable intermediary, both as a broker of future peace negotiations and as a trusted third party that can de-escalate Israeli-Palestinian tensions in times of crisis.

By exclusively endorsing Israel's narrative regarding Jerusalem, perhaps the most contentious issue in the Israeli-Palestinian conflict, the Trump administration has impugned its ability to serve as a reliable mediator.

Preventing violence and bolstering America's ability to act a role of an honest broker and to de-escalate when needed was precisely the reason why past American presidents, Democrats and Republicans, have utilized the congressional waver to avoid moving the embassy to Jerusalem. Trump chose a different path and now Israelis and Palestinians are paying the price.

At this point, the Trump administration should undertake remedial measures regarding its disastrous unilateral recognition of Jerusalem as Israel's capital. Following the opening of America's Israel embassy in Jerusalem today, the Trump administration should state its support for a future Palestinian capital in East Jerusalem within the context of a two-state Israeli-Palestinian peace agreement.