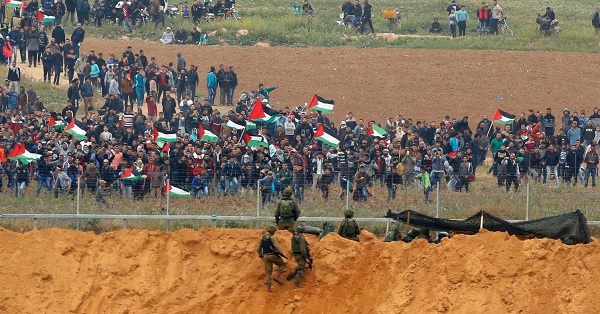 Washington, DC -- Americans for Peace Now (APN) is alarmed and saddened by the loss of life of unarmed civilians in the Gaza Strip, and warns against further deterioration of hostilities on the Israel-Gaza border. APN calls on both sides, Israelis and Palestinians, to exercise restraint and act responsibly to avoid further bloodshed.

APN warned Wednesday of the dynamic that unfolded today. We warned Palestinians against breaching the border into sovereign Israel. We also expressed alarm at Israeli government's threats to use lethal force against unarmed Gazans protesting on their side of the border and urged the Israeli military to use minimum force to protect the border fence.

Some Palestinians – reportedly only a few – did approach the border fence in a manner that indicated an intention to breach it. Apparently, there was at least one case of such a breach. There was also one reported case in which IDF soldiers were shot at. The IDF used lethal force, including sniper fire and even tank shells, not only against those attempting to breach the fence but also at Palestinian demonstrators who did not threaten the fence.

The result was at least 15 Palestinians killed and many hundreds injured, according to official Palestinian reports.

Palestinians have every right to nonviolently protest inside the Gaza Strip. Further protests are planned to continue through May 15, the day Palestinians observe as "Nakba Day," a day that commemorates their defeat and dispossession in 1948.

It is now incumbent on both sides' leaders to act responsibly to avoid further bloodshed or, worse, a deterioration into another round of all-out military confrontation.