Michael Walzer: We must hold on to one central truth: the necessary condition of Jewish sovereignty is Palestinian sovereignty 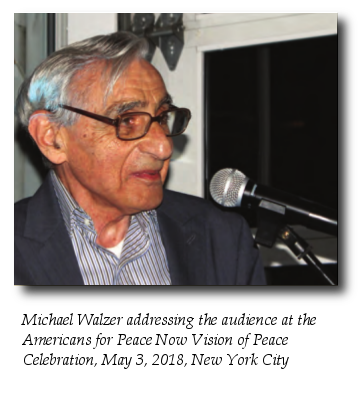 During a recent Shabbat, I had a memory flash. Reading the haftorah, Amos 9, I remembered something that happened 70 years ago. I was 13, in middle school, in Johnstown, Pennsylvania. We started every morning with the Pledge of Allegiance and then the Lord’s Prayer (my parents told me to stand silently). Then one of the students would read a few lines from the Bible. Sometime in the spring of 1948, I chose a few lines from Amos 9:

And I will bring again the captivity of my people Israel,
and they shall build the waste cities, and inhabit them;
and they shall plant vineyards, and drink the wine thereof; and
they shall no more be pulled up out of their land which
I have given them, saith the Lord thy God.

I didn’t believe all this would be God’s doing, but I did believe it was being done by the Jews of the Yishuv, and I was incredibly proud. It was, it still is, their project, but it is also our project, and it isn’t finished. Not by a long shot.

Right now, the project isn’t going well. Israel has the worst government in its history and the US has the worst government in our history. The combination is especially worrying. But as there is resistance here, so there is resistance in Israel. Shalom Achshav is a crucial part of it. And we know what needs to be done if the people of Israel are to build, inhabit, plant, and drink in peace in the years to come. 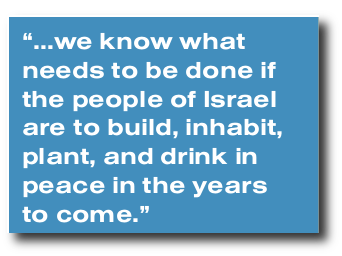 We are entangled in the land with another people. They too are poorly led. And like the Israelites in ancient times, they too are in captivity. And their captivity must be ended as ours has been ended. Now Amos suggests in the same haftorah that God will do the work: “Have I not brought up Israel out of the land of Egypt? and the Philistines from Caphtor, and the Syrians from Kir?” Don’t count on that kind of deliverance. The Palestinians must help themselves, and too many of their leaders don’t, at this moment, believe in two deliverances; they refuse to recognize the first. And many Israelis and many American Jews oppose the second; they have hardened their hearts. Still, the second deliverance is necessary. Israelis must find ways, since they are the captors, to help end the captivity of the Palestinians, and the friends of Israel have to help, too, especially the American friends.

Our project has gotten complicated. The humanitarian crisis in Gaza, the March of Return, the Israeli sharpshooters, the expanding settlements, the Iranian bases in Syria, the bluster of far-right politicians, the weakness of the left — I can’t pretend that things are easy or will be easier in the months to come. But we are set and steadfast on our path: two deliverances and two states for two peoples in one ancient and much-disputed land.

Most Israelis and Palestinians still believe that would be the best solution to the conflict, but I don’t think most of them still believe it is possible. And there are all sorts of experts telling us it can’t happen. But I have lived long enough to learn something about the experts: they rarely get really important things right. They were sure: there could never be a Jewish state; the Jewish militias, the Haganah and Palmach, would be overwhelmed by the Arab armies; the Soviet Union would last for decades to come. They foresaw neither the Arab spring nor the Arab fall. Further back, the story is the same: the experts predicted the Israelite slaves, fleeing Egypt, would die in the wilderness; the Macabees would be routed by the Syrians; Cyrus king of Persia would never allow a return to Judea; no nation could survive in exile for hundreds of years without sovereignty or territory. Politics is, thank heaven, unpredictable. Big political changes are always a surprise.

So here is the paradox: we have to be ready to be surprised. We must be sure of our program, prepared for necessary compromises and uneasy alliances, quick to seize the moment when it comes. Through whatever troubles, we must hold on to one central truth: the necessary condition of Jewish sovereignty is Palestinian sovereignty. What must happen will only happen if we make it happen. That’s the job of our friends, colleagues, comrades in Israel. It is also ours, in solidarity with them.

Jobs of this sort are governed by a maxim from Pirke Avot: we are not obliged to finish the work — you and I won’t finish it — but neither are we allowed to walk away from it.

And we won’t walk away.

Excerpted from Michael Walzer’s remarks upon acceptance of the Americans for Peace Now Vision of Peace Award, May 3, 2018, New York City.

Michael Walzer is Professor Emeritus at the Institute for Advanced Study in Princeton NJ. As a professor, author, editor, and lecturer, Walzer has been central in the revival of practical, issue-focused ethics and in the development of a pluralist approach to political and moral life.

Michael Walzer - A Call for Truth and Peace - Rosh Hashanah 2014/5775
Na’aseh V’nishma: “We will do, and we will hear.”
Clear Jewish Priorities
The lesson of Shavuot - Arami Oved Avi
Peace Parsha: Purim - A fantasy of our worst selves