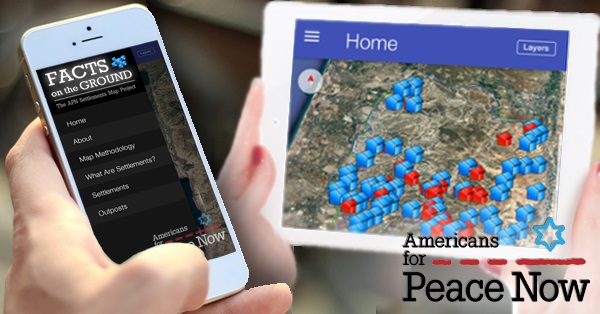 Israel's 51-year-old occupation of the West Bank – which denies Palestinians their rights, corrodes Israeli society and democracy, and continually damages prospects for Israeli-Palestinian peace – is fundamentally anchored in the Israeli settlement enterprise in the West Bank. Settlements stand in the way of a two-state solution by preventing a viable, contiguous, independent state of Palestine, a purpose for which they were explicitly designed.

That’s why Americans for Peace Now is today releasing Facts on the Ground, a new, completely revamped and upgraded version of the groundbreaking settlements map app, available for free on iPhone and Android. 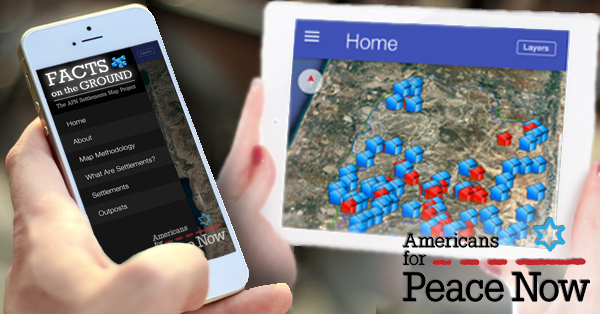 Download APN’s Facts on the Ground for iPhone or Android.

With the help of Peace Now‘s Settlement Watch – the most authoritative, credible source on settlements – Facts on the Ground gives users the ability to track, explore, and gain a comprehensive understanding of the settlements. As a mobile app designed to be used by policymakers, diplomats, journalists, teachers, students, and anyone else interested in the Israeli settlement enterprise, Facts on the Ground is truly one-of-a-kind.

Originally released in 2010, APN’s Facts on the Ground was the first-ever interactive online map of West Bank settlements. The new version features up-to-date statistics and data, including individual “snapshots” of every settlement and outpost in the West Bank. The app includes informational video, a comprehensive glossary, and a new, expansive statistics section from Peace Now. Facts on the Ground also marks the re-launch of APN’s Settlements in Focus publication. New issues, each profiling different West Bank settlements, will be featured on the app and available to all users.

Download APN’s Facts on the Ground for iPhone and Android today.

We rely on your support to maintain this tool and put it in the hands of as many people as possible. Please donate to our “Facts on the Ground 2.0” crowdfunding campaign to support APN's mission of stopping settlement expansion and preserving the viability of a two-state solution to the Israeli-Palestinian conflict.

Facts on the Ground: The APN Settlements Map Project
$6,000 gets us to our goal. Download and support this app!
APN In The News: Nov 11- Nov 16
The Trump administration won't have any more excuses
The new News Nosh App! Download it today!
COMING NOVEMBER 13: APN's new settlements map app