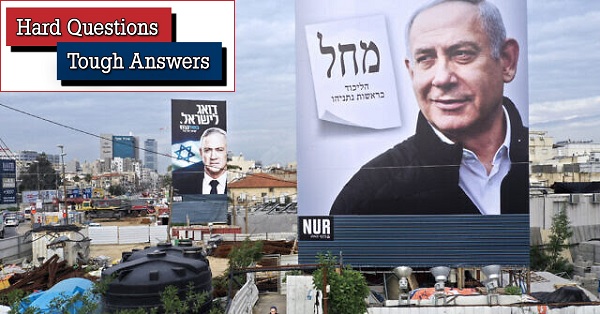 Q. Israel’s coronavirus situation looks less messy than most countries. The country still doesn’t have a governing coalition, but that too is beginning to look routine. You used to run a strategic think tank. Suppose you could do so again. What would your research agenda look like in these unsettled times?

A. Back in the 1980s and early ‘90s, when I was at the Jaffee Center for Strategic Studies (now INSS) at Tel Aviv University, the research agenda was “classic” and straightforward: war and peace. We researched the first Intifada, then helped lay the groundwork for the Oslo process and the ensuing peace with Jordan. We looked at Israeli-Palestinian final status prospects. We asked how to make sure the peace with Egypt held together. We began to worry about Iran. We looked at long-term trends in terrorism.

Today the agenda should be anything but classic. There is no peace process and prospects for one are slim. Iran is a huge worry. Russia has set up shop again in the Middle East. Global warming and the covid-19 pandemic have opened up an entirely new category of strategic studies.

Q. Corona? Let’s start with the hottest category. What should your think tank do?

A. Here the enemy, whether a pandemic or the effects of global warming--the two are almost certainly connected, by the way--is internal. The current covid-19 pandemic offers many lessons in terms of strategic domestic re-organization. Almost certainly, once the pandemic is over, a national commission of inquiry will look at those lessons and the mistakes behind them. Our virtual think tank does not have to wait; it can begin offering lessons and ideas for the future right now.

One lesson is the need to create a permanent infrastructure or template for dealing with a crisis like covid-19 at the national level. Even today, after months of corona, that template does not exist. Israel’s health, finance, internal security and defense ministries are still jockeying for authority over production and import of protective equipment, policing of hard-hit Haredi neighborhoods, and testing. The prime minister has refused to appoint a “czar” who would have overall authority and responsibility.

That is one area of controversy that has to be sorted out in preparation for the next crisis. Another concerns intelligence collection and analysis. Who is in charge of monitoring health and environment-related developments globally and translating collected data into coherent warnings of impending danger and directives regarding how to prepare?

These days we are informed that there were warnings regarding covid-19 as early as last November. Certainly by January preparations should have begun with regard to procuring or manufacturing protective equipment, swabs, face masks, etc. Perhaps a new national intelligence unit has to be created to ensure better early warning and preparation.

Yet a third controversy concerns Israel’s improvised use of the army and digital collection capabilities to help overcome spread of the virus. Despite the violation of privacy, the public readily accepted these moves. But they have to be evaluated and anchored in legal regulations before the next round.

Then too, the entire Israeli health system has to be better funded. The system itself, with its comprehensive nationwide coverage, is good by international standards. But under Netanyahu over the past decade it has suffered radically from under-funding, as anyone waiting for weeks and even months for an operation or a sophisticated examination can testify. Turning the Ministry of Health over to a sectarian minister--in Israel’s case, a politician from a Haredi party who put Haredi interests first--was also a mistake.

Q. Moving on to “no peace process”, there is certainly still a Palestinian issue. How would you define it for your virtual strategic think tank agenda?

A. Obviously, ways to keep Israel Jewish and democratic by dialoguing with the Palestinians should still be an agenda item. Even the Trump deal of the century, however ill-conceived, cannot be dismissed, if only because a Netanyahu-led government might try to implement it unilaterally, Palestinians might respond angrily and a think tank should be ready with contingencies.

But I would, regrettably, feel impelled to introduce an additional research topic, one that Israeli and Palestinian think tanks don’t seem to be contemplating. This new topic should be at the top of the agenda.

There is by now a growing consensus among strategic thinkers on both sides that the broad direction of developments is toward some sort of one-state entity. Everything points in that direction.

Israel is increasingly right wing-messianic in orientation and swallowing up more territory. The West Bank remains diplomatically isolated and politically bogged down in a leadership crisis while the PLO clings to extreme demands like the ‘right of return’. The Arab states display indifference, the Europeans paralysis, and the US wants to get out of the Middle East. We are on a very dangerous slippery slope toward either apartheid, a bi-national set-up of some sort, or something in between. Alongside our hopes to get back to two-state thinking, we cannot ignore the growing slippery slope reality.

Q. And next on the agenda?

A. The radically changing nature of Israel’s neighborhood.

First, there are more Russians and fewer Americans in the neighborhood. What does that mean for Israel in the long term?

Second, Iran, hegemonically expanding into Iraq, Syria and (through Hezbollah) Lebanon, is now a neighbor. Despite all its problems with corona and US President Trump’s economic sanctions, Iran appears to be in Israel’s neighborhood to stay. Is the current low-profile campaign-between-wars (Hebrew acronym: mabam) the best military way for Israel to deal with Iran across our northern borders? How does Russia’s apparently permanent presence in Syria figure in this strategy? How should we define victory in the campaign-between-wars? What could go wrong?

Third, we have to look at state instability in the immediate neighborhood. Lebanon is broke and unstable politically with Hezbollah (meaning Iran) increasingly influential. Jordan and Egypt are hard put to deal with dissent, even without corona. Egypt is running out of water and threatening Ethiopia over a controversial Nile River dam. What are the worst-case scenarios around us and how would they affect our strategic interests?

Fourth, the more distant neighborhood. What are the prospects for Israel’s current semi-clandestine ties with the energy-rich Gulf Arab states? How would an Israeli-Palestinian one-state reality affect relations? What if any genuine strategic and economic benefits does Israel gain from its Gulf relations?

A. Here we can’t avoid getting involved in Israel’s internal composition and the question of whether it has the most suitable political system. Or can we? Unlike the questions examined above, these are issues that have been researched by think tanks from every possible angle. Every conceivable reform has been suggested: a written constitution, separation of religion and state, a presidential system, a constituency-based electoral system. Little has changed.

This is one area where our virtual think tank cannot be particularly innovative. As Arye Carmon, founder of the Israel Democracy Institute, recently pointed out, Israel is a country whose society has grown by a whopping 1,200 percent in the course of a mere two and a half decades. This has generated a whole package of ‘worsening centrifugal trends’ that are hard for any society to deal with.

Suffice it for our think tank, with its emphasis on strategic security issues, to point out that the future status of about 20 percent of Israeli society, the Arab sector, is heavily dependent on the outcome of the Israeli-Palestinian conflict. As matters stand, with Israel descending that slippery slope toward a one-state entity, the identities and interests of West Bank Arabs, East Jerusalem Arabs and Arab citizens of Israel will increasingly merge. And that will be translated into Israeli politics--exactly how, remains to be seen.

Q. We began by noting that the absence of a governing coalition is beginning to look routine. Abandoning your think-tank mode of thinking into the future, what is your prognosis for the coming week of Israeli politics?

A. Coalition talks between a shrunken Blue-White party and the Likud bloc were, as of Monday April 20, hung up over PM Netanyahu’s persistent demands for fool-proof guarantees against High Court intervention that could disqualify a person indicted on corruption charges from holding office. Netanyahu is willing to jeopardize everything--governance, national solidarity and the rule of law--to satisfy his own egomaniacal drive for power and immunity. Sadly, the right-religious mainstream still largely backs him.

Will Blue-White leader Benny Gantz give in to these demands, thereby creating a coalition at the expense of the rule of law and hoping against hope that Netanyahu will honor the agreement to rotate the premiership in 18 months? Or will Gantz stand firm, thereby committing Israel to a ruinous fourth round of corona-haunted elections yet perhaps leaving him time as Knesset speaker to legislate against judicial immunity for Netanyahu?

These are questions no think tank can answer.