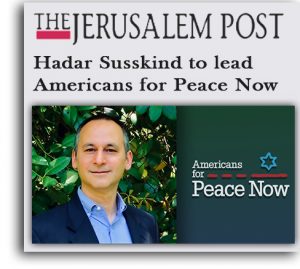 The announcement comes as liberal pro-Israel groups mount a pressure campaign to influence Washington politicians to speak out against plans in Israel to annex parts of the West Bank.

Americans for Peace Now, an influential group on the Jewish Left that was among the first to advocate for the two-state solution, is naming as its president Hadar Susskind, a veteran senior official of an array of Jewish groups.

The announcement comes as liberal pro-Israel groups mount a pressure campaign to influence Washington politicians to speak out against plans in Israel to annex parts of the West Bank. Susskind, 47, over the past two decades has worked in senior positions in such groups as the Jewish Council for Public Affairs, the Jewish public policy umbrella; J Street, the liberal Jewish Middle East policy group; and Bend the Arc, a social justice activist group. This year he led the bid to increase the representation of a progressive list, Hatikvah, in elections for the World Zionist Congress. Americans for Peace Now took two years to replace Debra DeLee, who helmed the organization for 21 years.

Susskind “joins us as we face the most challenging threat posed to date to the two-state solution: annexation,” the group’s chairman, James Klutznick, said Wednesday in a statement. “The resolution of the Israeli/Palestinian conflict on the basis of two sovereign and independent states, for two peoples, living side by side in peace and security, is in grave jeopardy.” Israeli Prime Minister Benjamin Netanyahu has set a deadline of July 1 to annex parts of the West Bank.

The organization, a constituent member of the Conference of Presidents of Major American Jewish Organizations, works to influence legislators and policymakers in Washington. It was established in 1981 and is a sister movement to Israel’s Peace Now.

Forward: "American Jews: You are desperately needed in the fight against annexation" by APN's Ori Nir and Daoud Kuttab
Please read Ori's op-ed and give in his honor
APN in the News: April 21 - May 18, 2018
Hadar Susskind, APN's new President and CEO
NEW ITEM - Goal: Lower the expectations of the Palestinians - The Friedman File: APN Watch on soon-to-be-ex-US Ambassador to Israel
Press Release: APN Thanks House Members for Anti-Annexation Letter
APN's Hadar Susskind in Ha'aretz: "The Real Reason for ‘Mainstream’ Jewish America’s Appalling Silence on Annexation"