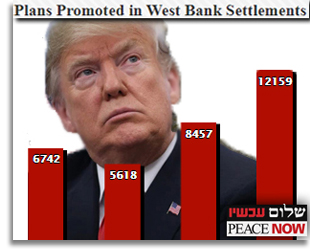 These are the chief findings of a new report by the Settlement Watch Project of Israel's Peace Now movement, the world's leading non-governmental body documenting Israel's settlement activity in the West Bank.

The report is available here on Peace Now's web site.

"As he has done on a broad array of sensitive foreign policy matters over the past four years, Trump has swung his wrecking ball at America's longtime efforts to help build a bridge between Israelis and Palestinians and bring them closer to resolving their conflict. He treated millions of Israelis and Palestinians the same way he has treated the workers in so many of his failed businesses, with disdain and a total lack of concern for their welfare," said Hadar Susskind, the President and CEO of Americans for Peace Now, the U.S. sister-organization of Israel's Peace Now movement. "President-elect Joe Biden and his Middle East policy team will have their work cut out for them. Our activists throughout the United States will be there to support a responsible US policy, which removes obstacles on the path to Israeli-Palestinian peace."