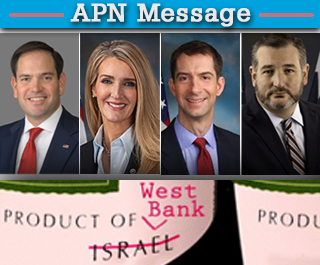 Commenting on this initiative, APN’s President and CEO Hadar Susskind said: “The West Bank is not a part of Israel and therefore Israeli products made there are not made in Israel. Rather, they are made in an occupied territory, held by Israel under military rule, pending a political agreement regarding its future. If it were up to these four senators, who presume to be friends of Israel, these territories would become a part of the sovereign state of Israel, forcing Israelis to choose between becoming an undemocratic apartheid state and becoming a bi-national state that is no longer Jewish. Conflating Israel with an occupied territory is not pro-Israel. It’s pro-apartheid. Differentiating between Israel and the West Bank, which – thankfully – is not a part of sovereign Israel, leaves a path to a two-state Israeli-Palestinian peace, which is the only path for Israel to be a secure, democratic, national homeland of the Jewish people.”

APN Welcomes Normalization of Israel-UAE Relations; Calls for End to Occupation
From Creeping to Leaping: Annexation in the Trump-Netanyahu Era (updated October 2019)
A Letter from APN for Passover 2021
NEW ITEM - Goal: Lower the expectations of the Palestinians - The Friedman File: APN Watch on soon-to-be-ex-US Ambassador to Israel
Special Rosh Hashanah Q&A: Peace Prospects for the Coming Year
Full text of remarks by Secretary of State John Kerry on Israeli-Palestinian peace