At the Knesset: "After 54 years: Between Occupation and Apartheid"

Israel’s Peace Now movement was one of several Israeli peace and human rights organizations that participated on Tuesday, June 22nd, in an event titled ‘After 54 years: Between Occupation and Apartheid.’

The event was hosted by MK Aida Touma-Suleiman of the Joint List and MK Mossi Raz of Meretz and addressed the political and human rights repercussions of Israel’s 54-year occupation of the West Bank, Gaza Strip and East Jerusalem.

Representing Peace Now was Shabtai Bendet, the director of Peace Now’s Settlement Watch project. Bendet spoke about the way in which Israel’s occupation and settlement construction in the West Bank have created an apartheid-like reality. Among other examples, he referred to the allocation of public land by the Israeli authorities for construction, and gave the following example. Of the 346,000 acres that the government of Israel has declared as public land in the West Bank since it captured it in 1967, some 170,000 was allocated for construction. Of that only 0.24% was approved for Palestinian construction. All the rest was allocated for the construction of Israeli settlements. The Israeli government approved some 250 Israeli settlements in the West Bank but not even one new Palestinian community.

“You have one population that consistently does not receive almost any resources, and another population that according to international law is not supposed to be transferred to this area, which receives almost all the resources,” Bendet said. “As uncomfortable as it may be, we must recognize the reality that we create, day in day out. Only then we may realize the severity of the actions taken by Israel there, which may be the beginning of a solution.”

Other organizations represented at this event were B’Tselem, Adalah, Yesh Din, Gisha, Breaking the Silence, and Human Rights Watch. 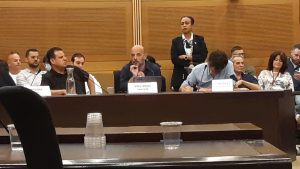