Add you name and a tribute message to honor the efforts of Mandy Patinkin, David N. Myers and Nomi Stolzenberg, and/or on behalf of peace for Israel and its neighbors.

If you're in Southern California, or can be on April 27th, make a reservation to attend this special event. 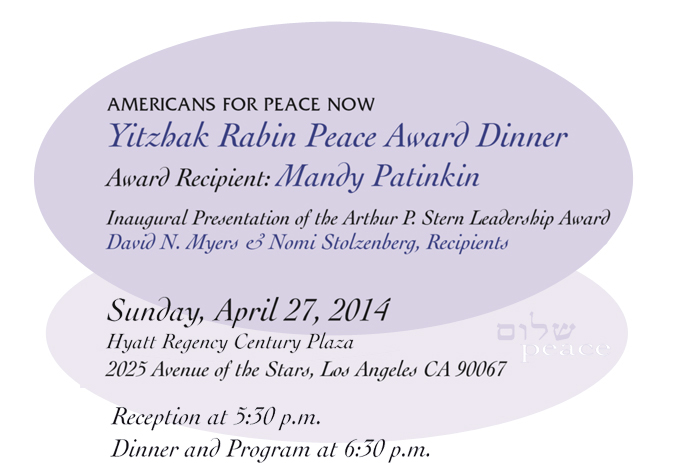 Make a Reservation / Place an ad in the event's Tribute Journal

Click on the link above, then save the form and return by: 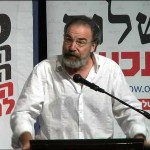 Mandy Patinkin, well-known as an accomplished actor, singer, and performer, Mandy is also an Americans for Peace Now Board Member who has generously shared his personal commitment to hundreds of thousands of people through letters, speaking at events, and at his own concerts. In May, 2012, Mandy took advantage of being in Israel for the TV Series Homeland to meet with leaders of Shalom Achshav, who also showed him parts of Jerusalem and Hebron. He was then a featured speaker at their national conference in Tel Aviv, and gave a speech that was so passionate and compelling that it went viral. Excerpted highlights of the speech can be seen HERE.

Arthur Stern, who passed away in 2012, was a longtime APN Board and Executive Committee member, and was considered its moral compass.  Born in Hungary and a survivor of the Bergen-Belsen concentration camp, Arthur went on to became an internationally accomplished electrical engineer. He dedicated his retirement years to advancing the causes he cared deeply about -- ensuring the future of Israel being primary.

David N. Myers is professor of Jewish history and chair of the History Department at UCLA, also having served ten years as director of the Center for Jewish Studies. His work has touched on a number of key themes in modern Jewish history, including Zionism and relations between Jews and Arabs, and he writes and lectures frequently on contemporary Jewish affairs, particularly Israel/Palestine. 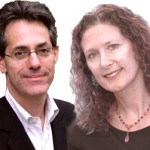 Nomi Stolzenberg, a graduate of Yale University and Harvard Law School, is Nathan and Lilly Shapell Chair in Law at the University of Southern California. Her work spans a range of interdisciplinary interests, among them are assimilation and indoctrination in education, and the relationship between race and religion. She is currently at work on a book American Shtetl: How a Jewish Village Took Root in the U.S. with her husband David N. Myers.

David, Nomi, and their children Avital (Tali), Noa, and Sara, shared a deep connection and friendship with Arthur Stern.

Make a Reservation / Place an ad in the event's Tribute Journal