ATFP and APN - Peace Partners: The Israeli-Palestinian Conflict on Campus 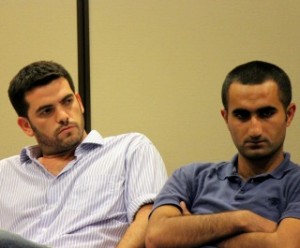 On Wednesday, July 16, Americans for Peace Now along with the American Task Force on Palestine (ATFP) hosted an event that focused on the way in which the Israeli-Palestinian conflict plays out on US college campuses.

Two of the NSL participants, Hamze Awawdeh, a Palestinian from the West Bank town of Doura, and Yehonatan Toker, a Jerusalemite Israeli, are participating in the APN-ATFP Joint Internship Program this summer. Hamze is interning with APN and Yehonatan with ATFP. 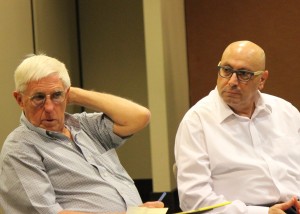 Also attending were Israeli Professor Edward Kaufman of Haifa University, and Professor Manuel Hassassian of Bethlehem University, who is also the Palestinian ambassador to the United Kingdom. Kaufman, and Hassassian, longtime academic partners, are co-teaching a class on the conflict and its resolution at the University of Maryland. 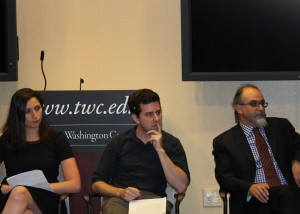 The discussion, moderated by APN and ATFP staff, addressed a broad range of topics relating to the ways in which the Israeli-Palestinian conflict plays out on American university campuses, and how to de-polarize the conversation on the conflict. The speakers, mostly students and recent graduates, exchanged their experiences of efforts to engage in effective dialogue within and between each side, on how to turn dialogue into joint action, and how to recognize the legitimacy of all personal and historical narratives without compromising one’s own.

This was the second year in which APN and ATFP co-sponsored such an event, which is a component of their Peace Partners program.