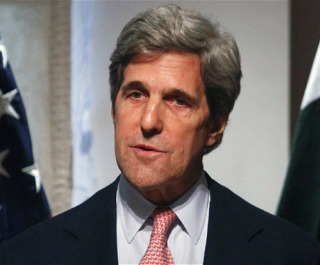 Secretary Kerry and President Obama deserve credit, not scorn, for acting as true friends of Israel by trying to find an off-ramp from the current conflict. A mutually-agreed ceasefire will, by definition, have to deliver something to both sides. Disgustingly, rather than welcoming Secretary Kerry’s efforts, Israel officials and Knesset members have responded with contempt, ridicule, and outrageous assertions that Kerry has “betrayed” Israel or is supporting terrorism. These attacks – consistent with much of the politically-motivated attacks lobbed at the Obama Administration by the Israeli right – have been amplified by a chorus of attacks in the Israeli media and from critics and cynics inside and outside Israel.

Secretary Kerry needs to hear from you – tell him you want him to keep working for a ceasefire!

President Obama has made clear that his Administration’s goal is “ensuring Israel’s security, protecting civilians, alleviating Gaza’s humanitarian crisis, and enacting a sustainable ceasefire that both allows Palestinians in Gaza to lead normal lives and addresses Gaza’s long-term development and economic needs, while strengthening the Palestinian Authority.” He has also made clear that “ultimately, any lasting solution to the Israeli-Palestinian conflict must ensure the disarmament of terrorist groups and the demilitarization of Gaza.” Even if some concerns about the details of a given ceasefire proposal have merit, publicly suggesting that the Obama Administration has “betrayed” Israel by seeking to craft a ceasefire proposal that takes this fact into account are contemptible and dishonest, and do not serve Israel’s best interests.

Tell Secretary Kerry: Ignore the cynics and the critics — keep working for a ceasefire!

As a true friend of Israel, it is critical that Secretary Kerry, with President Obama’s continued support, rises above the attacks and continues to work with the parties and partners in the international community both to expedite an end to the immediate crisis and to pave a clear road back to a diplomatic process that can, once and for all, address the causes that are at the root not only of the current round of violence, but of the entire Israeli-Palestinian conflict.

Click here to thank Secretary Kerry for his efforts to end the current Israel-Gaza bloodletting, and tell him that as someone who cares about Israel, you want him to keep trying until he succeeds.