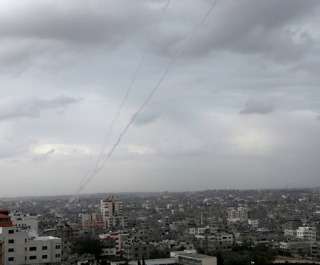 Calling for a ceasefire in no way contradicts this fundamental truth: Israel has the right and the obligation to take measures to stop the terror of incoming rocket fire from the Gaza Strip. This right and obligation, however, poses tremendous challenges for Israel, as demonstrated by previous Israeli military operations in Gaza. Let me explain:

Realistic expectations – As past efforts have clearly demonstrated, Israeli military action can at best achieve short-term tactical gains in Gaza. What it cannot achieve is the destruction of Hamas, the total removal of the threat of rockets from Gaza in the future, or a resolution to what is fundamentally a political challenge, the future of the Gaza Strip – a challenge that can only be resolved through a negotiationed solution to the Israeli-Palestinian conflict.

Civilian casualties – While Israel can target its operations as carefully as possible, it cannot change the fact that Israeli military action in Gaza, no matter how carefully targeted, will inevitably lead to large numbers of casualties among innocent Palestinian civilians, including children, and massive destruction of homes and civilian infrastructure in one of the most densely populated places in the world. Israeli statements assigning all blame to Hamas cannot prevent images of death and destruction in Gaza from being disseminated to the entire world, stoking concern and even outrage, both among anti-Israel forces and among those who are in no way anti-Israel but who object to seeing such a degree of disproportionate force being used in this manner.

Strengthening Extremists – To the extent that Israeli military action may be able to deal a blow to Hamas, it cannot avoid at the same time strengthening more extremist forces in Gaza and, potentially, in the West Bank, where the viability of the Palestinian Authority is increasingly in doubt. Political instability within the Gaza Strip and the weakening or dissolution of the Palestinian Authority would likely result in chaos, which is definitely not in the national security interest of Israel, the United States, Egypt, or any other relevant parties.

Getting Bogged Down – Escalating military action increases the risk of Israel becoming bogged down in another open-ended, ill-defined mission in Gaza, increasing the dangers to Israeli soldiers and civilians alike. Ongoing military action in Gaza raises the specter of a multi-front conflict, as confrontations and clashes continue inside Israel and the West Bank in the wake of the horrific murders of three yeshiva students in the West Bank and a Palestinian teenager in East Jerusalem.

Undermining Israeli claims to self-defense – Israeli official statements to the effect that Israel has no interest in a truce or ceasefire at this time risk sending the world a message that Israeli is exploiting the right to self-defense to engage in a punitive campaign and pursue military adventurism. This message risks undermining the credibility of Israel’s claims that it is indeed acting in self-defense.

Defining a ceasefire – A ceasefire is not an end in itself. A ceasefire can prevent additional suffering on both sides and calm the situation; prevent the strengthening forces even more extreme than Hamas; avert the further discrediting and potential dissolution of the Palestinian Authority; and re-open the door to a political process that is the only thing that can prevent future resumption of Israel-Hamas fighting by resolving, once and for all, the Israeli-Palestinian conflict. Unfortunately, past ceasefires have not been treated in this manner, leaving the fundamental conflict unaddressed and turning into intermissions between rounds of fighting. The sides cannot continue to make this same mistake, over and over.

Reporting on President Obama’s phone call with Prime Minister Netanyahu, which took place last night, the White House stated: "The President expressed concern about the risk of further escalation and emphasized the need for all sides to do everything they can to protect the lives of civilians and restore calm. The United States remains prepared to facilitate a cessation of hostilities, including a return to the November 2012 ceasefire agreement." President Obama deserves credit for his statement of concern and his offer to help. However, given the high stakes, the U.S. cannot simply sit on the sidelines waiting to see when this offer will be taken up.

For all these reasons, I ask you to join Americans for Peace Now in urging President Obama to work to achieve a ceasefire, consistent with America’s obligation as Israel’s closest friend and ally.

Doing so is also consistent with America’s policy of supporting peace and security for Israel, and its commitment to security and stability in the region. Long-term security and stability, as well as sound international support for Israeli acts of self-defense – can only come as a result of a peace agreement that leads to recognized sovereign Israeli borders. The United States can and must work with Israel, the Palestinian Authority, and allies in the international community and in the region – including those who can communicate with Hamas – to end this round of fighting and re-launch a meaningful political process that can, at long last, end the conflict.