This is another in a series of reviews of new books on Middle Eastern affairs. We asked Dr. Gail Weigl, an APN volunteer and a professor of art history, to review the book Seeking Palestine, edited by Penny Johnson and Raja Shehadeh. 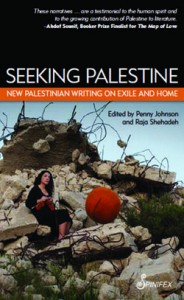 What does it mean to be an exile from Palestine? Is it defined merely by physical dislocation, or is it less tied to a place than to an idea, to a Palestine that once or perhaps never existed, to a pervasive sense of being displaced, even from a land that was not the land of one’s birth? The essays that compose Seeking Palestine: New Palestinian Writing on Exile and Home examine notions of exile, of Palestine, of Palestinian identity in diaspora from the perspectives of poets, academics, novelists, artists and independent writers living as outcasts from a country that never existed as a nation-state, the idea of which calls forth irrepressible longing for a way of life known only through memories, many of those not memories of their own. These writers ask themselves what it means to cling to an identity, a way of life, a set of grievances across generations, and whether the persistence of an idea and an identity can persuade the world at large to seriously address the Palestinian longing to return to their homeland.

From the outset, the editors make clear that the purpose of this book is to present a collection of essays that imagine rather than represent Palestine, to examine the forms Palestinian identity might take, and to explore how it is forged neither from nostalgia nor from the attempt to reclaim a past, but from an imaginary terrain that makes possible the keeping alive of hope. The “memory” of the Palestinian exile is rooted in an identity, and this book presents to the reader the multiple forms and meanings that identity can take.

Despite the signposts set forth in the introduction, Seeking Palestine opens with the initially perplexing “Memories of an Un-Palestinian Story” by the novelist and Palestinian child advocate, Susan Abu-Lawa. This poignant and unflinching memoir of familial abandonment and abuse reveals itself, however, to be well-placed as the first essay, for it introduces a fundamental leitmotif: the dispossessed, disinherited exile always lives at the mercy of others. Again and again, the reader confronts the anguish, bitterness, sadness, anger and anomie of the outsider, and the hatred of the “colonizer,” of those who “keep them” outside-- the Israelis, and the Americans whose policies unconditionally facilitate Israeli acts of humiliation, and brutality.

Without specifically condemning Israel, by recounting experiences ranging from forced expulsion from one’s land or home to the consequent need to obtain a visitor’s visa to re-enter the territory that had been one’s home, the essays illustrate a fundamental equation: loss of land equals loss of identity as a member of a people. It is an irredeemable stain upon honor.

This corrosive violation of Palestinian identity is brilliantly discussed by Lila Abu-Lughod, professor of Social Science at Columbia University, and the daughter of the Palestinian-American professor and activist, Ibrahim Abu-Lughod, a man who advocated tirelessly for the end of the Israeli-Palestinian conflict. In “Pushing at the Door: My Father’s Political Education and Mine,” she addresses the distinction between the Palestinian-American living in the diaspora and her anguish at the chasm of understanding between American and Palestinian views of Palestinian losses and insults to humanity, and the direct, living experiences of her father and others who experienced “…the historical injustice of Palestinian dispossession” (44) and its aftermath. Her essay, more political and historically oriented than many in Seeking Palestine, clarifies how a Palestinian identity is formed by those who lost Palestine, as illustrated by her father’s deliberate program of imbuing his children with tastes, memories, and visions of a way of life they never experienced; through that cross-generational process, ties were formed to an identity that transcended geographic displacement. What can we derive from this? Can it help us to understand the ineradicable wound to Palestinian honor? The facts of expulsion and occupation are painful enough, but daily small humiliations are the tipping point. More damaging than the loss of home are the regular insults to one’s autonomy and humanity that underline
that loss.

A different tone and orientation, if not a different message, is voiced by the poet Mahmoud Darwish, quoted by architect and writer Saud Amiry in her contribution, “An Obsession.” Darwish’s poem, “My country: close to me as my prison,” is a cry of pain, couched as an obsession not with that which can be named, but with the inchoate emotions aroused by all that the concept of Palestine conjures. Amiry returns to a more political stance when she decries not only the American and European indifference to Palestinian suffering and dream of a homeland, but also, the indifference of the Arab world, observing, “Like most Arab countries, Syria loves Palestine but hates the Palestinians.” (83)

This too is a leitmotif: the sense of being forever dismissed and misunderstood, or perhaps worse, ignored. It is the lament of the perennial victim always on the periphery.

Co-editor and lawyer Raja Shehadeh’s “Diary of an Internal Exile: three  Entries,” on the other hand, is not concerned with the nuanced emotional pain or philosophical musings characteristic of many of these essays. Her contribution begins with a long jeremiad against Israeli injustice, against “our oppressors”, focused on Arafat’s compound in Ramallah, where the partially destroyed structures attested to “the power of the usurpers of our freedom to destroy not only our physical surroundings, but also the depositories of our dreams.” (89) Her ultimate concern, however, is the failure of Arafat and the Palestinian Authority, to take charge of Palestinian destiny. Among the few contributors to suggest a possible solution to the current impasse, she--an internal exile in Ramallah—believes the exile will end only when Israelis and Palestinians reject notions of divine rights and narrow nationalistic narratives, making possible their mutual
occupation of the disputed land.

In “The Driver Mahmoud,” the Cairo-based write and poet Mourid Barghouti turns to black humor much as Jewish victims of anti-Semitism once did, to illustrate both the resiliency of the Palestinian armed only with laughter and irony, and the challenges faced by those living under Occupation as well as by the Occupiers. A different tone is struck by one of the most moving of the essays, by Rema Hammami, professor of anthropology at Berzeit University . “Home and Exile in East Jerusalem” charts the gradual transformation of the Arab East Jerusalem neighborhood Sheikh Jarrah through an accretion of details that build an intimate portrait of a unique place since destroyed by Israeli settlements. Unlike Raja Shehadeh, also embittered by the wanton destruction of a Palestinian site, Hammami’s portrait of Sheikh Jarrah resonates with longing and bittersweet sadness. Consciously Dickensian in its associations, it is a tale that unfolds against the background of Israeli-Palestinian peace agreements that have left Jerusalem as an afterthought. The consequences of that failure are charted through the lives of men and women impacted by continuous Israeli incursions into the neighborhood, and by the precarious status of Arabs still living there, fighting for their right to long-held homes and land. Taking Sheikh Jarrah from 1989 through 2006, hers’ is a deeply and carefully considered portrait of the annihilation of Palestinian East Jerusalem and with it, a never to be revived way of life..

Rona Barakat, Assistant Professor of Philosophy and Cultural Studies at Berzeit University, and Jean Said Makdisi, independent writer and researcher, and sister of Edward Said, both explore what it means to inherit a “state of exile.” For Barakat, it is the state of being forever defined by those who have colonized your home, forever prevented from returning to that home, forever heir to the fact that “Palestine was and continues to be subject to a kind of erasure unparalleled in modern history.” (142) She also takes a more distant approach to the question, considering whether one can claim to be exiled from a place or identity which is not part of immediate experience. For Makdisi, despite remaining Palestinian in heart, mind, and soul, the state of exile, of not belonging, is essential to her identity. Her essay explores, however, all the permutations of what, or who the exile is: the “Palestinian imperative”, for example, refers to the collecting and storing of memories, a clinging to the past, which forms the basis of the exile experience; to forget is to be complicit in one’s exile, to remember is to resist. Paradoxically, Makdisi asserts that the more Palestinian one becomes, the less centered one is on Palestine as a place: it is not the place but the idea of injustice that is equated with becoming Palestinian. The reader is struck at this point by parallels with the story of Jewish exile, and above all, with the equation of justice for the Jews with justice for humanity.

In “The Palestine that Never Was: Five Poems and an Introduction” the poet Fady Joudah poses a significant existential question: for him, the Palestine that was colonized, disposed and occupied—the Palestine that “was”—engenders nostalgia and longing for return to a Palestine which never was. The Palestine that resides in exile is a state of being that leaves the wanderer free to imagine a return to that which is yet to arrive. This existential longing, again reminiscent of Jewish longing to return to Jerusalem from exile, is made explicit by another poet, Mahmoud Darwish, who, in an excerpt from his “Journal of Ordinary Grief” cited by Rana Barakat tells us: “…Palestine remains your homeland, be it a map, a massacre, a land or an idea….No dagger will
convince you it belongs to them.” (140)

Never once, and understandably so, given the purpose of this anthology, is there even a hint of justification for American or Israeli conduct, even a hint of Arab or Palestinian provocation. But Seeking Palestine is not, nor is it intended to be a dispassionate narrative, and those looking for a reasoned, objective story of Palestinian exile will not find it here. What is reported exists in memory, in the passionate constructs of those victimized, brutalized and dispossessed by
conquerors with their own history of exile and brutalization. For those who seek to understand the tragedy of Israel and Palestine, however, it is an important corrective to the bloodless, if blood-filled, analytical reportage of the political players in the region. Furthermore, it is an important corrective for those who fail to recognize not only the anguish and humanity of Palestinians in exile—whether in Israel, the Occupied Territories or abroad—but who are
unfamiliar with the brilliance of an educated and literate cohort whose accomplishments parallel those of Israeli writers and thinkers. To understand more about these contributors, Seeking Palestine includes short biographies of the contributors. Read it. It will change your
mind and heart.

Secretary Kerry's Saban Forum Speech: Save the Two-State Solution
Peace Parsha: If this is so, then why am I?
A Letter from APN for Passover 2021
Book Review: Children of the Stone by Sandy Tolan
Heroes
Book Review: What do you Buy the Children of the Terrorist who Tried to Kill Your Wife?