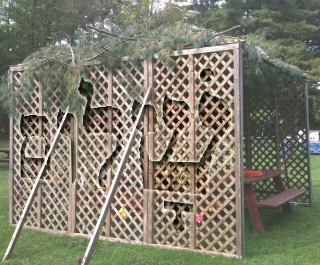 Beginning Wednesday night, October 8th, the Jewish holiday of Sukkot begins. During the week-long holiday, Jews build a special kind of home to dwell in for the week, called a sukkah. The sukkah is a deliberately temporary house, which can have no more than one permanent wall, and whose roof must be open to the sky, covered only partially by natural materials such as branches. Over the course of the week, the Sukkah is supposed to be one’s home: to eat meals in, to celebrate, and even to sleep in.

Our Israeli sister organization, Peace  Now,  broke the news that on the eve of Rosh Hashana, when the Netanyahu government hoped that nobody was paying attention it went ahead with final approval of a plan for construction of a new settlement in East Jerusalem –2,610 housing units in Givat Hamatos.

The sukkah – an odd, unfinished, temporary building, with an open roof through which one can see the stars, is a symbol of peace and of reconciliation after the period of repentance that is drawing to a close. It is mentioned every Friday night on Shabbat, as a metaphor for peace, asking that God, "spread over us a sukkat shalom - sukkah of Your peace."

In contrast, the houses being built in Givat Hamatos – and other settlements- are no mere symbols. They are active obstacles to the peace we cry out for. On the eve of Yom Kippur, instead of taking  an accounting of his deeds from the past year, PM Netanyahu accused Peace Now of “national irresponsibility”  simply for publicizing the actions he himself had approved.

At the end of Sukkot, we tear down those temporary dwellings, recognizing that peace is not in the buildings, but in our actions.  This year, as we dwell in our temporary houses, let us look up at the stars and picture a better future. And then, when sukkot ends, let’s stop the building.

May this year's sukkah be a sukkat shalom, a sukkah of peace, and may we merit to build our house - Israel- from peace.

A Sukkot of Peace
Sukkot
#SukkahStrong
Peace Now News Flash: The Ramat Shlomo Plan is to get the Final Green Light