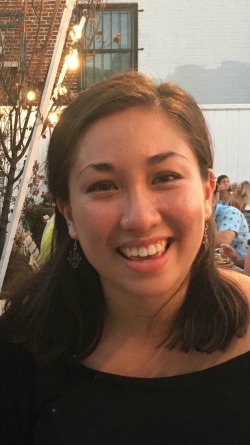 Every Shabbat, Jews around the world ask God to “spread over us a sukkat shalom – a sukkah of Your peace.” We express our hope for the protection of our dignity and our rights, and to live in a just and peaceful world with our neighbors. As the Jewish festival of Sukkot begins just days after Yom Kippur, Jewish communities come together to celebrate, among other things, the freedom of the people of Israel – and to build their individual and communal sukkahs as physical representations of this peace and protection that we seek.  Unfortunately, there are other homes being built that only serve to prevent both peace and freedom. 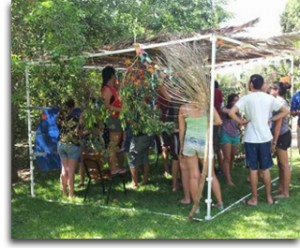 Three years ago, I lived on Kibbutz Ein-Dor in the north of Israel as part of my gap year program. There, I and 37 others helped build a sukkah (pictured).  Although it was little more than a simple, open-roofed structure with only one permanent wall, we rejoiced in our sukkah’s vulnerability. Our collective efforts to hang pictures of our families, lace colorful streamers around the few tree branches that served as our roof, and stake PVC piping into the ground as the sukkah’s base all brought us closer together as a community. Yet, it was the way that we ate, sang, joked, and dreamed together that allowed us to understand the true meaning of community filled with members who are at peace with one another.

This Sunday evening, as we prepare to celebrate Sukkot in a new year, we should be reminded of the connections between the sukkah and peace. The openness of the sukkah not only reminds us to share our homes with others, but asks us to open our hearts and minds towards building inclusivity and tolerance. In doing so, the sukkah becomes a communal structure sustained only by the shared commitment and vigilance of all its guests.

Peace, too, is vulnerable and requires these collective efforts in order to endure. Without continuous patience, care, and respect for others in the community, intolerance and hatred can eradicate prospects for peace. Thus, the meaning and usefulness of the sukkah extends beyond its physical structure: the ways in which members of our communities choose to relate to and see one another inside the sukkah bring the idea of peace and tolerance to fruition.

The fragility of the sukkah, our home during Sukkot, should remind us that homes are a sacred space that we rely on.  A home isn’t just a building, but more – it’s a place where we feel safe, even when it’s nothing more than a shack. Yet, as we have seen in the West Bank, homes can also be used as pawns by which to claim land and assert power.

As we approach the 50th anniversary of Israeli occupation of the West Bank, this Sukkot in particular demands that we condemn the building of homes that bring Israel further away from peace. Just last week, Israeli Prime Minister Benjamin Netanyahu approved almost 100 new housing units in the Shiloh Valley, contributing to Israel’s ongoing illegal settlement expansion. Furthermore, Netanyahu’s government is in the process of creating the first new settlement in the volatile city of Hebron in nearly a decade, and has moved ahead with plans to demolish the Palestinian village of Susya.

These settlement expansions and demolitions not only serve as a tool for the government to exert its power and control over the West Bank and East Jerusalem, but also work to undermine the interests of Israelis whose only wish is for peace and security for both Israelis and Palestinians. Netanyahu is sending them, and the world, a message that his commitment to a two-state solution is, at best, rhetorical and, at worst, nothing more than a cover for strengthening settlements and the occupation.

So as we build and rejoice in our temporary homes this Sukkot, we must recognize that the peace we as Jews have the potential to create is not confined to the space bound by the sukkah itself. We must extend our sukkat shalom over Israel by joining with others in our community to denounce the threat that settlement expansion poses to the two-state solution and Israel’s future. May this year’s sukkot strengthen our partnerships, community, and potential for collective action towards peace and security for all.