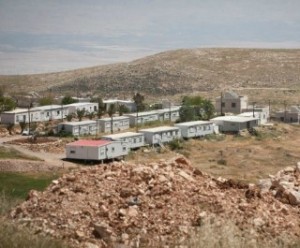 On December 7, 2014 the High Court ruled on Peace Now’s petition number 7891/07 which demanded to carry out Central Command’s delimitation orders and evacuate six West Bank outposts. High Court President, Asher Grunis, ruled that the state must evacuate structures in the outposts located on private Palestinian land, but that there is no place for the court to intervene in the state's prioritization of delimitation orders enforcement and did not oblige the state to evacuate structures located on state lands or survey lands, in light of the state's intention to legalize them.

The Six Outposts petition was submitted in 2007. Initially the state tried to postpone evacuation dates using different excuses while emphasizing its intention to evacuate the outposts. Following the establishment of the Netanyahu government, the state changed its position and announced to the court that it intends to legalize the outposts as long as they are not located on private Palestinian land.
Due to pressure by the court, almost all structures located on private Palestinian land in the six outposts were evacuated in recent years, but at the same time additional construction was noted in almost all of these outputs, only not on private lands.

On November 18, 2013 the High Court issued a partial verdict on this case, instructing the state to evacuate all remaining structures on private Palestinian land other than the structures in Givat Assaf, where the settlers claim to have purchased the land. In the verdict issued on December 7, 2014, the court abstained from obliging the state to evacuate the outposts other than one plot in Givat Assaf and an access road to Givat HaRoeh.

Regarding Mitzpeh Lachish, Ma’ale Rehavam and Ramat Gilad the court ruled that in light of the intention to legalize the outposts, and in light of the steps taken in this direction, it will not intervene and the petition will be stricken.

Regarding Givat HaRoeh the court ruled that it has no place intervening in the state’s demolition orders enforcement prioritization due to the fact that the outpost was built on survey lands and in light of the state’s claims that the surveying process and the declaration of state land there are currently in final stages as part of its legalization. With that, the court ruled that the access road leading to the outpost, which is partially on private Palestinian land, must be destroyed within a year.

Regarding Mitzpeh Yitzhar, in light of the fact that the structures on private Palestinian land have been demolished and the outpost is no longer located on private Palestinian land, the court ruled that it will not intervene in prioritization of delimitation orders enforcement. Chief Justice Grunis stated that as the state has no intention to legalize the outpost, it should make it a priority to evacuate it, but did not determine a date for such an evacuation. Vice President of the High Court, Judge Miriam Naor, stated in a concurring opinion that if the outpost will not be evacuated within two years, the petitioners could petition again to the High Court.

Regarding Givat Assaf, the entire outpost was established on private Palestinian land. Two years ago, the settlers argued to have purchased several of the plots and requested to remain in the outpost. Three plots were registered under the settlers’ names (one fully and two partially) and in the fourth, the claim for purchase was declared a forgery. During the High Court hearing it was revealed that there is an ongoing police investigation regarding at least some of the other plots as well. The court ruled that within three months, by March 1, 2015, the state must evacuate the structures in the fourth plot. Regarding the other three plots, the court ruled that forgery claims should be examined at a District Court and not at the High Court and that in light of the state’s intention to legalize the structures in the fully purchased plot, the petition for the other two plots will also be stricken. It is important to note that several paragraph before, the court mentioned the state’s position, according to which the state does not intend to legalize the construction and perhaps only allow planning for non-residential purposes: “…the state updates that in two out of the three plots in which partial ownership was acquired, it is at this stage impossible to move towards legalization of planning since a parcelization have not yet been conducted there. As for the third plot, which was purchased in its entirety, the state updates that due to its size it is impossible to designate it for residential purposes, but it could be designated for other purposes" (clause 9B of the verdict). The High Court Vice President, Judge Naor, added that claims for purchases have become a method used by the settlers to stall implementation of court rulings and that similar claims following the verdict will not lead to a change of the court rulings.

Political and public importance – Petitions by Peace Now and other organizations against illegal outposts shed a light on the governments’ actions in the occupied territories and expose government true intentions of establishing more and more settlements while trying to hide and deny their actions as well as to bypass the democratic “rules of the game.” Even in cases where the court decides not to force the government to enforce the law on illegal settlements, our petitions raise the issue to the public debate and create pressure on the government. Thus, while we cannot expect that petitions alone will stop the occupation, they contribute a great deal to the struggle against it.

Building on Private vs. Public Lands – The issue of overtaking private Palestinian lands for settlements was not known until a decade ago and definitely did not exist in the public debate. Following a Peace Now report exposing the extent of this phenomenon, Peace Now and other organizations began to petition to the High Courts demanding to enforce the law against settlements invading to private lands. One of the first petitions of this kind was the Six Outposts petition. Both the hearings and the verdict of this case indicate a trend in the public and legal debate of focusing on the issue of land ownership. The fact that today new building is hardly ever constructed on private land is a result and an achievement of such petitions. With that, the issue of building on state land still remains. As in other cases, the court abstained from obliging the state to enforce the law when it comes to public lands (which are often referred to as “state lands”). This sends a message to the settlers and the government according to which it is okay to build illegally and work in ways that bypass the democratic process.