J St conference 2015 - APN's Lara Friedman on panel: What Can the US and International Community Do About Settlements? 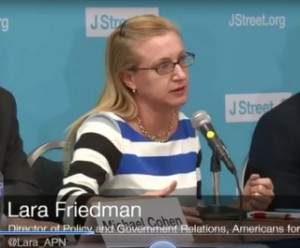 There were only a handful of Israeli settlers beyond the Green Line in 1968, when Lyndon Johnson became the first American president to express opposition to settlements in the West Bank. Now, despite protest from every subsequent administration, there are more than 350,000 Israelis living in the West Bank and 200,000 in East Jerusalem. President Johnson’s prediction that settlements would “prejudice a peace settlement” has come true, as the dramatic rise of the settler movement—in both numbers and political power—has complicated repeated efforts to achieve a two-state solution.

Watch to see  Lara Friedman, together with Michael Cohen of the Boston Globe and Alon Sachar of the US State Department, with Steve Krubiner, J Street's Chief of staff,  moderating.  Aviva Meyer, Deputy Chair of APN, introduces the participants. Session begins at 10:35.